I am trying to make a reasonable augmentations. The settings is post cyberpunk, so the tech is little more advanced. For coolness I would like to have ability to jump around 5 meters high ground-leg distance. For this jump I have about 3 seconds preparation time to accumulate required energy to create spasm in bionic muscles strong enough to perform this feet (For rule of cool so it looks like Neo when he prepares for flight)

The man with two augmented legs weight 120kg if his original weight was 80kg falls down from 5m height and the physics do this (this man cannot further augment and does not want synthetic bones and organs):

The impact energy = 5884J (For comparison, professional boxer can punch you with 1600J)

With these numbers I simply cannot imagine that our specimen would walk it off. I mean just the brain in your skull might get concussed because fluid wont absorb this much energy, and I don't know about other organs.

What would need to happen to perform same fall and not be shaken or at least not concussed. Would some roll help to transfer some of that energy into motion? To where the bionic legs could transform this fall energy so it wont go to meat body?

You'd hit the ground at roughly 10 meters per second. That's definitely survivable without significant injury as long as your character is prepared for the fall and doesn't land on anything pointy. Believe it or not, there are people in the real world who jump at heights similar to what you're considering for fun. Watch the movements of videos like this for inspiration. As the guy in the video says, this kind of activity can cause longterm joint damage and there's definitely a risk for injury.

The below image from a parkour website gives another perspective on how people safely land. 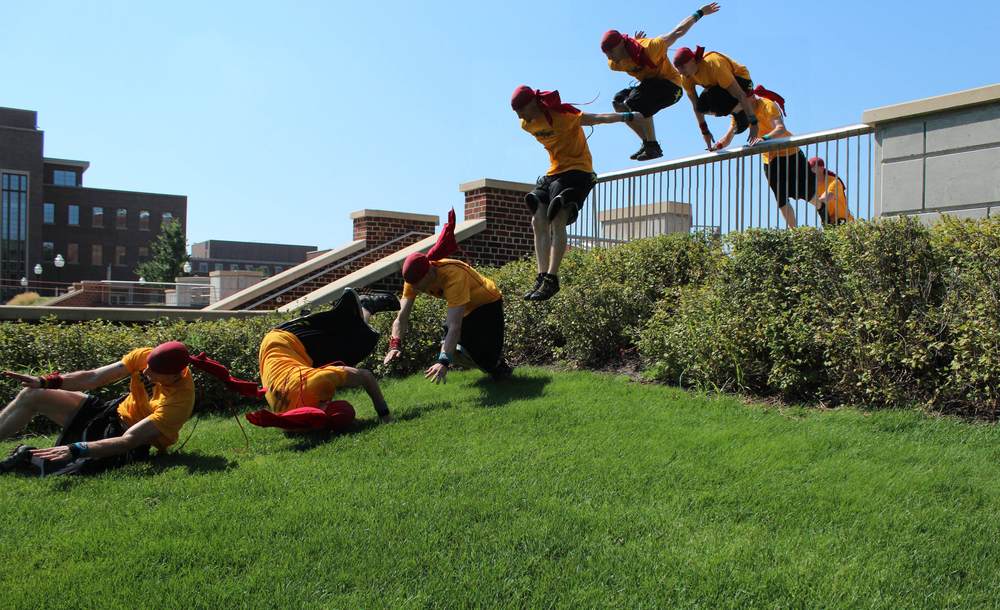 DISCLAIMER: Don't try this in the real world!

There is a big difference between sudden deceleration and deceleration even over 1-2 seconds. The same way that the guy flexed down, accumulated and sprang up he will do in reverse.

Some of the energy will go into heat; of the ground for sure, and of his legs and body. But you can have some energy recapture. Like an induction brake on an electric car converts kinetic energy into electrical energy and charges the battery, his bionic legs will capture the kinetic energy and recharge his battery.

Also re rule of cool - a long drop might overcharge / overheat the battery. As opposed to breaking bones, he will overstress his cooling system.

You see, what kills someone falling from a big height isn't the fall itself, but the deceleration. Like you said yourself, a 5m fall usually would be a problem for an unprepared person. Apparently the maximum height a human can safely fall from normally is 2.45m.your character is jumping little less than twice that. In order for him not to require techniques such as rolling, his legs would need to absorb most of the impact and would be responsible for slowing his fall down as much as possible. For that, not only you'd likely need some good cushioning structures on them, I'm fairly certain they'd need to be in a more digitigrade stance and be longer than a human's, most likely looking a lot like a mechanical humanoid hare of tree frog. That way, once his legs initially touch the ground, the cushion pads will begin absorbing a small part of the shock (I'd advise to also have cushioning between the end of the legs and the beginning of the body for extra protection). Immediately after that, the legs will need to flex in order to increase the time of stopping as much as possible. Falling naturally from a 5m height means you'll stop in 1 second, with a final speed at roughly 10m/s or 36 km/h, considering gravity as 10m/sxs (both to make it easier and to give a slight failsafe). As the max speed you can have is around 6.93m/s, that means that you'd need to extend your fall time in around 5.93 seconds(there's a chance that I'm wrong and the value is too high, but that likely works as a failsafe). In order words: your legs would need to reduce the fall as if you were falling from around 3.46 meters, aka your legs need to be (or extend to) around 1.54 meters to ensure your character has a decently safe fall. The leg extension could be made through the use of the right pistons, similar to a car's suspension system.

As for the jump, as you're dealing with a world in which you can modify a body without rejection issues (safe for bones and internal organs), you likely can have a system capable of this. I recommended another piston system using air pressure, designed solely for the jump and usually inactive during normal walking, which could also aid in the landing, as the jumping mechanism ensuring powerful flexing could also help reduce the impact as the joints bend during the fall.

Summing up, it's likely doable, but your legs will need to have quite a few gimmicks in them to ensure you can land safely, considering it already has a strong enough system to allow for your jump.

The head travels at 10m/s, bending the knees stops and leaning forward until the chest touches the knees (crouch position) makes the head decelerate to 0m/s over a distance of 1m.

Concussion happens mostly in rotational acceleration and for a long time the threshold for the linear acceleration required for a concussion was considered at 70-75g. Now, even if a correction of one order of magnitude is necessary, it still means 7g is above the computed 5g (the fighter jet pilots go frequently over this limit)

Okay, don't actually use Chell's Longfall Boots from PORTAL, because that's copyright infringement, but if you want to be capable of dropping 5m, have your augmented character wear a pair of sweet cyberpunk boots that have impact resisting capacities on the bottom, capable of taking the brunt of the impact. Heck, if you want them to be really cyberpunk, they'll fire out a huge gust of wind to cancel some of the momentum upon impact which also has the side effect of creating a massive shockwave when this character is landing. And, honestly, what more could you ask for at that point?

Not the answer you're looking for? Browse other questions tagged biology cybernetics or ask your own question.

10
High Voltage Nervous System
5
Effects of high magnetism?
6
High-Altitude Life?
0
Are brain augmentations capable of interfering with orgasm?
5
How to cushion the brain from high g-forces
11
Any benefits or problems on using a national I.D chip implant rather than an I.D card in a high tech society?
4
Biological touch based high bandwidth communication
7
Adaptation to high $\mathsf {CO}_2$ concentration
1
Physiological changes necessary to scale an insect's size up while maintaining a catapult jumping mechanism and jump/body ratio?