I've been working on designing how an ammonia-ocean world might work and I've settled basically everything except one. I cannot for the life of me find any sources that actually provide a decent way to estimate how strong a greenhouse effect is with an alien atmosphere. The topic gets touched on here and there, but nothing I felt I could easily use. I've gathered that ammonia is a greenhouse gas, just one not long-lived on Earth. This brings up something important. Ammonia has a big vapor pressure. The partial pressure of ammonia even on a cold world would be quite significant. I'm also assuming a lot of methane for biological reasons. What sort of greenhouse effect will you get on a world with as much or more partial pressure of NH3/CH4 as Earth has nitrogen?

I don't need absolute precision, I just want to be sure I'm not giving ammonia worlds air mixes and orbits intended to leave them chilly enough for ammonia but would actually turn them into Venus. A rule a thumb, an estimate, would be awesome.

planets hard-science chemistry
Share
Improve this question
edited May 7 '20 at 13:55

Ammonia is a greenhouse gas.

Not the easiest question because although you can find data that absorbs energy in the infrared spectrum (one of the qualifies for a greenhouse gas), it is not considered in publications dealing with the greenhouse effect because ammonia has such a short residence time in our atmosphere. Our current atmosphere, that is.

I found this fine article by Sagan and Mullen. It is very approachable and qualitative; I would expect nothing less from Carl Sagan.

Earth and Mars: Evolution of atmospheres and surface temperatures

This is 1972. They consider how warm earth is and note that it would be colder if it were not for the trapping of infrared emissions from the Earths surface by atmospheric gases - the greenhouse effect. They note that the sun has gradually been getting brighter. They then consider the ancient Earth when the sun was cooler - with current atmosphere the sea would be frozen. Adding more CO2 does not help because apparently you reach maximal absorption pretty fast. Adding NH3 does help and they lay out (in lay terms!) the properties of NH3 that make it a good greenhouse gas. Then they show how cold the earth would be with and without NH3 over time. 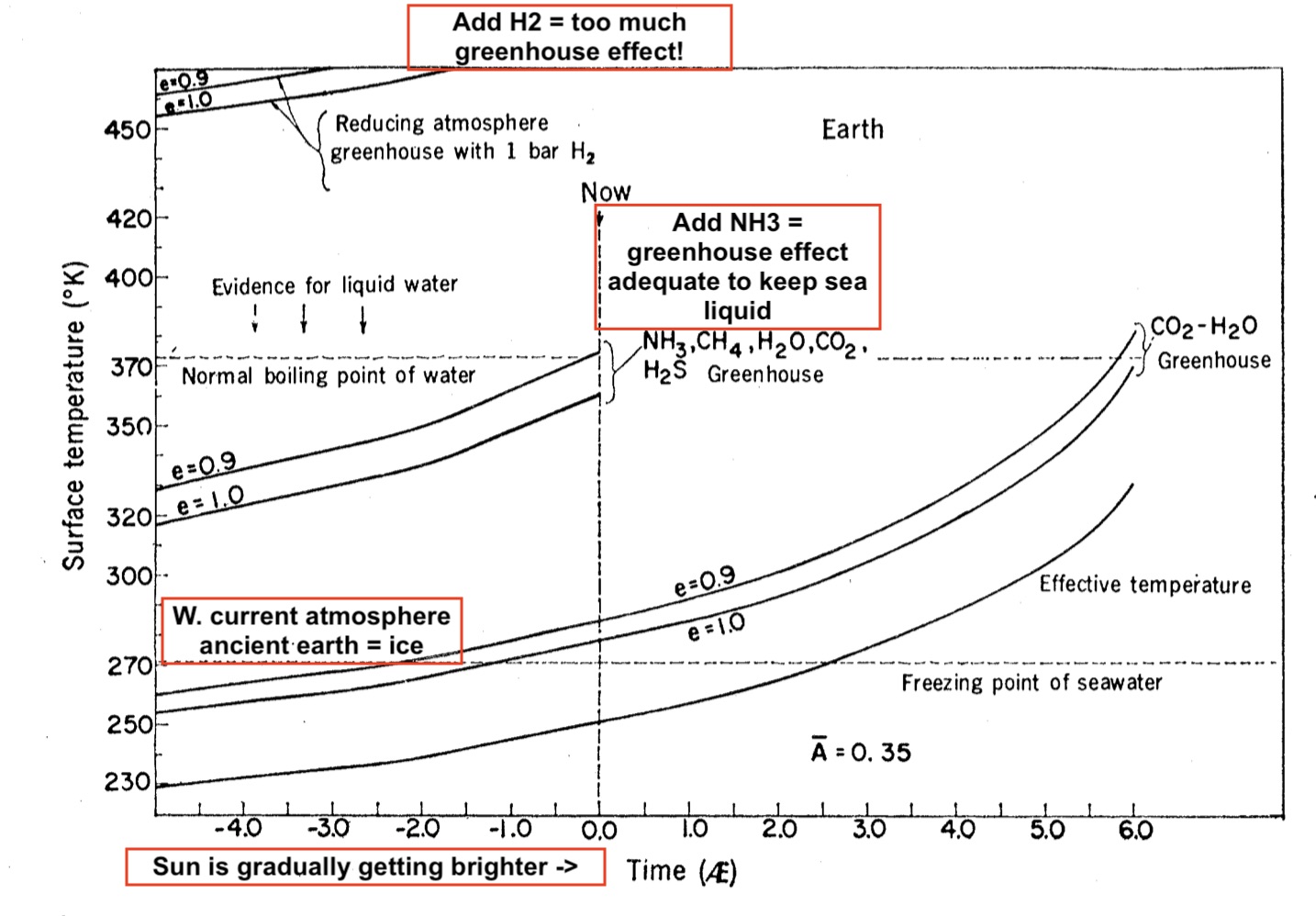 Red boxes are mine. I encourage anyone interested to check out the linked paper.

It is a good thing that NH3 went away with the Great Oxygenation or the seas would be boiling by now! In any case - NH3 is definitely a greenhouse gas. But there is plenty of wiggle room for you to make your planet how you want it to be. You could assert that NH3 infrared absorption also maxes out. You could make the atmosphere more or less dense. You could cool the planet by increasing albedo - maybe even increasing it with a haze of atmopsheric ammonia ice.

Not the answer you're looking for? Browse other questions tagged planets hard-science chemistry or ask your own question.

4
Is an earthlike planet with ammonia oceans even plausible?

16
What would an ammonia-based world look like?
24
What effect would liquid sulfur oceans, sulfur dioxide in the atmosphere have on visibility, sound propagation and other environmental information?
8
Ammonia planets
4
Ammonia planet- atmosphere
11
Is it possible to make high-compressive-strength cement on Mars?
8
Carbon cycle in a sulphur-based biochemistry
10
Would A Biological “Cold Haber” Process Deplete an H2/N2 World of its H2 or N2?
4
Is an earthlike planet with ammonia oceans even plausible?
10
How could a breathable ultra-high pressure atmosphere form?
4
How to calculate the greenhouse effect?