A Seafloor of Ice and Rock: Ice VI / Water Boundary

Many planets out there will be water worlds. Those generally come in two flavors: either the oceans are so deep that the water turns into high-pressure ices like ice-six, -seven, -ten and -eleven or they aren't, leading to worlds with rocky seafloors.

On a world with Terran gravity, ice-six would from at a depth of ca. 63 km. The oceans of Ganymede and Titan probably have these kinds of icy seafloors. So since there are ice-free and endlessly icy seafloors, I was wondering about the borderline case. Let's say a planet with global oceans with a depth of 63 +/- 6 kilometers. I'd imagine that this would result in rocky highlands and seamounts and ice-plains in the lowlands and trenches.

However, I was wondering how the boundary between ice-six and water would actually look like. Would it be a sharp distinction, like a smooth ice-plain or rather uneven and like the underwater side of ice-bergs? Or would there be a slushy transition zone with poorly defined borders? Or something totally different?

Additionally, should I think of ice-six just as dense ice or is seeing it as rock made out of water a more accurate description?

physics underwater ocean
Share
Improve this question
edited May 7 '20 at 12:21

The water phase diagram can help you understand how the interface will behave. 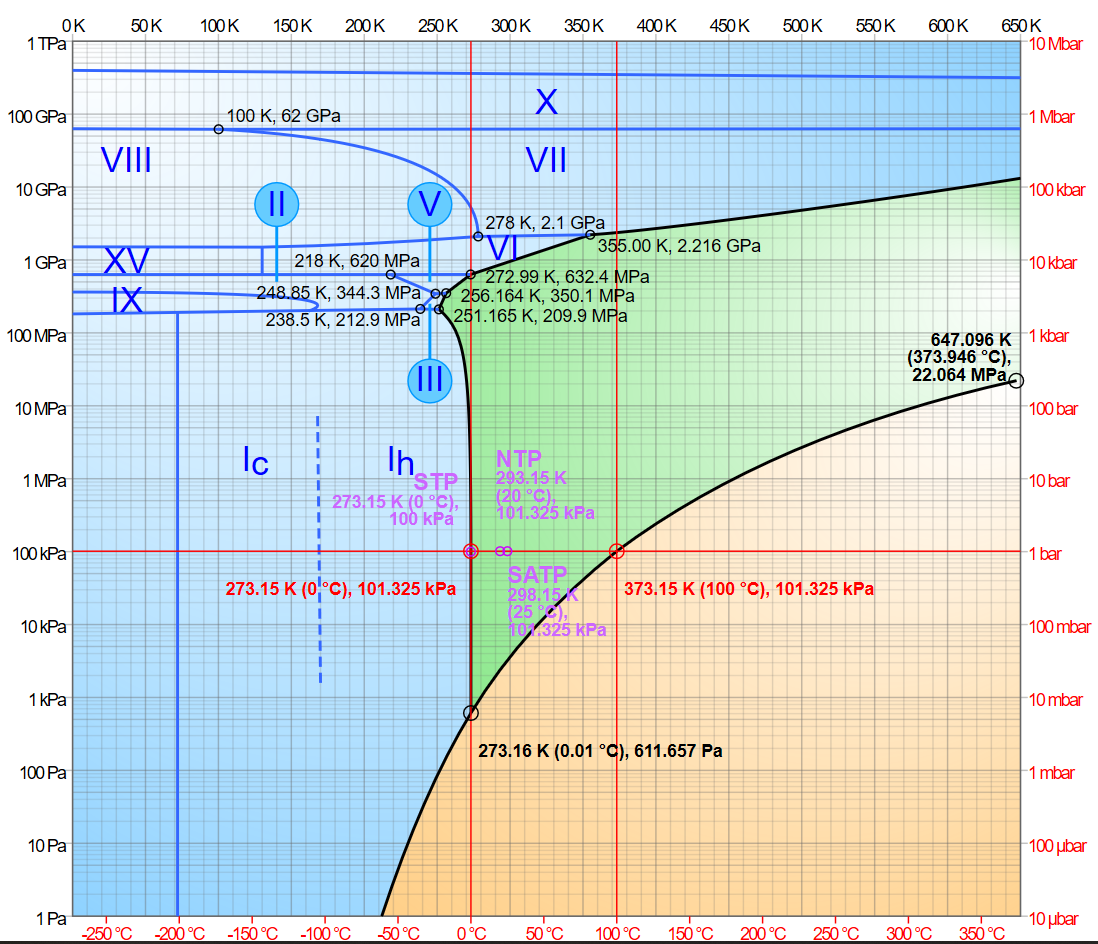 The transition from liquid to solid is sharp, by changing the pression like you would have because you are going lower or higher, you would go from the liquid to the solid phase (you would move along a vertical line in the chart). Local temperature variation (horizontal in the chart) might affect the physical state, too.

But it wouldn't be anything much different than the interface between ice and water you can see in any glass of drinks.

By the way, the submerged surface of icebergs is uneven because of its interaction with water currents, the same way a wall exposed to sand-carrying wind is unevenly eroded. But on a small scale the interface is equally sharp as it is in your glass of iced tea.

Not the answer you're looking for? Browse other questions tagged physics underwater ocean or ask your own question.

8
Exoplanetary Review: Rock Storms
14
Heavy water icebergs
8
Exploring deep ocean at 1GPa with minimum metal available
15
What would the minimum mass of a water world need to be to form ice Vll, due to pressure, at its core? What about ice X, ice Xl, and higher?
6
Crossbow that fires ice-bolts? Seeing as Ice Bullets are impractical and don't work, would firing Ice Bolts work instead?
1
How long would it take oceans to evaporate if they stopped gaining water?
9
How to blow up water and fly through the wake
2
Could a mature (and giant) lobster remain in sea water indefinitely without decaying?
2
Floating Ice Homes