Would an obligate carnivore eat bread/grain?

Say I have a race of obligate carnivores (for simplicity, we'll say they're felinoid). They have carnivore dentition, and must eat meat as a major component of their diet, but they can also eat fruit and derive nutrition from it. They enjoy fruit (and vegetables), but for the complex flavor and tartness rather than for sweetness, which they cannot taste. (They react to fats much the way humans react to sugars. My theory is that they can break down simple sugars, but not carbohydrates, they need lots of protein, and there is something present in meat that they cannot get from other sources short of artificial supplements; possibly taurine.)

Now, obviously they aren't going to eat a lot of breads/grains, except maybe as a form of dieting, however there are all sorts of interesting culinary dishes that can't be made without grains (Wellington, burritos, fried chicken and so forth); in particular, grains give a certain "crunch" that's hard to replicate with pure animal products. Assuming that they've been exposed to these by other means (as they probably wouldn't invent cultivation of grain on their own), would they be able to eat such dishes? Or is there another way to make such dishes using only "meat" products or something else that is easier on their digestion?

I'll assume, first, that they want to eat such dishes, and second, that they aren't toxic. (That is, they can eat citrus, onions, grapes, cocoa, etc. without being poisoned. Grains might not be wonderful for their digestion, however, but they're willing to put up with a little extra "bulk" moving through their systems for the sake of excellent gastronomy.)

Still using cats as an example, there is no issue using sugar and starch in food such as bread for energy and as a source for sugars. Even if the beast is an obligate carnivore, its metabolism will still be based around sugars and it will almost certainly retain the ability to use free sugars from diet instead of having to generate them all internally. The benefits are simply too large and availability of carbohydrates in diet too universal.

Where being obligate carnivore does impact the diet in comparison to humans is that ability of cats to digest those carbohydrates is limited in quantity. If your diet generally contains relatively little carbohydrates, you do not need a high capacity to digest them. The surplus will simply get wasted. The excess would typically end up feeding bacteria, which may or may not cause issues.

So small and occasional starch or sugar rich treats would totally work for obligate carnivores. As long as the quantity is small enough, there will be no issues. And even if you indulge too much, the consequences should not be worse than for humans, they'll just happen sooner at lower quantity.

An obligate carnivore might have lost its ability to taste sweetness and actually prefer crunchy bread with lots of texture and dietary fiber to sweets.

Using cats as an analogue, since they meet the criteria of felid obligate carnivores, I'd say that they'd be capable of eating bread.

A quick google image search is all that is needed to confirm this. 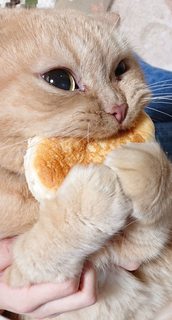 You are correct that an obligate carnivore must eat meat (e.g. cats because they can't produce taurine), but that doesn't stop them from eating other foods, such as sugars and grains. Their sense of taste, their dentition, etc. are simply tuned by evolution to prefer foods they need to survive because those who don't would tend to die before passing on their bad genes.

However, once their nutrition needs are met, e.g. a housecat with a reliable food supply that doesn't require hunting, they may eat all sorts of things that aren't nutritious because they're interesting (e.g. bugs, string) or assist with digestion (e.g. grass, bones).

We humans put all sorts of weird stuff in pet food that they'd never eat in the wild, in some cases specifically because it isn't nutritious and we want to put them on a diet. Also, while many cats would prefer raw food if given the choice, others actually prefer canned or kibble, so it's not unreasonable for felinoids to have a more diverse diet than what biology dictates, and it may vary wildly by individual. There's just a floor to how much of it must be meat.

Note that some felines are allergic to grains, but only in parts of the world where grains simply aren't found. Felines that are around grains in the wild will eat them occasionally, even if only second hand in the digestive track of their prey, so allergies were long ago removed from their gene pool.

Bread contains little nutritional for cats, except for the sugar within it. Sugar itself isn't great for cats, especially given that they didn't evolve to deal with consuming large quantities of it, unlike omnivores such as Homo Sapiens. They also can't really digest plants. This is because their digestive system is too small. An obligate carnivore, such as a cat, will have a very short digestive system (specifically small intestine) because of how easy it is to break down meat. By contrast, an obligate herbivore, (such as, say, a koala) will have an incredibly long small intestine and very specializes enzymes. We humans, by the way, fall in between the two extremes.

And bread is pretty delicious. Not only the taste, but the various textures of bread isn't something that you can replicate given only meat. The cats would certainly be capable of eating them. Would there be problems? Yes - cats weren't exactly designed to eat grain. Still, they're more than capable of developing a tolerance for it, and such a tolerance is pretty pervasive among species that live near wild grains. Even if it isn't, by using small and constant exposure, it's possible to build up a tolerance enough for eating bread.

Not the answer you're looking for? Browse other questions tagged biology food or ask your own question.

12
What would be the major body changes if we were obligate carnivores?
88
Lembas bread (2000 Calories per bite)
51
Does a hexagon-based bread loaf make any sense?
11
What foods will lycanthropes and vampirism-afflicted individuals need to avoid?
1
What would human characters eat in a world with no animals
11
What would a vegetarian mermaid eat?
17
Will food logistics limit the population of a civilization of obligate carnivores with modern technology?
1
Making Immobile carnivore
2
Non-human diet and toxic substances?