How small can I make this character without making it too weird?

I'm creating a character who was born after a long period of genetic instability, which created a lot more diversity throughout the human race. I'm planning on making my character excessively small and light, but not so small that it gets too weird. I am trying to avoid these traits:

So, what is the minimum size I can make my 14-year-old human character before I run into said problems? Please include height and weight. 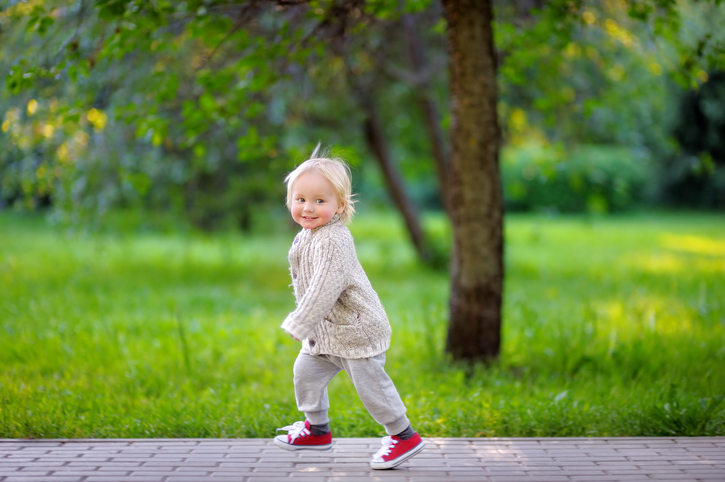 It has been proposed that humans are neotenous chimps. Our faces certainly look like that - we have no muzzles, like most adult mammals do. We are flat faced giant baby chimps. It is no great stretch to have your future humans even more neotenous.

Toddlers can run. They can use tools. They are incoordinated chiefly from lack of practice. Their heads are big enough to hold adult sized brains and you can have the brain continue to mature. If you want to keep some of the mental toolkit of a young child that is fine; they are curious and if aggressive, in a different way from sexually mature humans. I am not sure why bursting into flames is a risk for small things but toddlers do not routinely do that.

You might want to see the answers to this similar question about how young someone could be and be functional:

How "young" can a non-aging person be and still function?1

My answer to this question:

mentions some extremes of humans size, including very small persons.

Typing "body size" in the search worldbuilding function at the top of the page found 2,904 results.

A lot of the factors involved in answering your question are environmental.

Perhaps the main factor is the oxygen levels of the atmosphere. The lower the oxygen levels, the bigger the lungs have to be to get enough oxygen to the body. Too low oxygen levels, means a very disproportionate lung to body ratio. Sherpas, who operate at very high altitudes, have exceptional lung capacity, and have genetic modifications that allow them to utilize oxygen better than sea level dwellers.

Another factor is the availability of calorie-rich food. The higher the calories in the food supply, the more energy can be supplied by a smaller digestive system. The fact that humans tend to eat meat has led to our current digestive-system/body size ratio. Ruminants, for instance, tend to have multiple stomachs and very long intestines.

The third factor is the gravitational constant. This ties in with the number of calories and oxygen the body can take in. The more energy that is required to move vertically in high gravity, the more calories are needed. Paradoxically, lower gravity does not necessarily give smaller bodies an advantage, because no matter what the gravity, a body of equal mass has the same momentum and inertia. It takes the same force to stop someone from running on the moon as on earth, at the same speed. For vertical movement, low gravity is advantageous. For horizontal-to-gravity movement, it offers no advantage. It takes the same force to get a mass moving horizontally on a frictionless surface on the moon as on earth. In low gravity, it is still the mass-to-energy level that rules, not the weight-to-energy level. EDIT To illustrate the difference between horizontal and vertical movement, consider a small child carrying a heavy bag across a floor, verses trying to hold the same bag when going up in an elevator.

Also, the thickness of a structure to hold something up varies as the square of the weight. To hold twice the weight, the legs have to be perhaps four times bigger. That is why insect legs can be so skinny. You cannot scale them up to human size linearly, you have to do it exponentially. Simply scaling human legs down linearly, would result in excessively thicker legs than needed. Thicker legs would offer no advantage, but would require more energy to move the increased mass.

You also have to factor in the relative size of other things in the environment. To an average size human, stepping over a log presents very little increase in energy from simply walking. On the other hand, a small dog would require proportionately more energy and effort to get over the same log. So what is the environment these people would normally exist in? Is everything tailored and scaled to their size?

Although this may not be the type of answer you are looking for, it may give you a place to start. That is, first you must define the environment this person would function in.

I think there was a Heinlein story with a subplot where the children as a hobby wanting to have crew for very small space ship got in trouble for genetically engineering small people who ended up not being very bright. These were small enough to be kept in a dollhouse, or small cage. In that case it was intelligence that seemed to be the limiting factor.

From a physics perspective volume and thus the weight goes as the cube – this is the famous reason why ants can't be as big as horses. Since you are going the other way, proportionally to some extent your little person could end up being strong and durable.

Momentum (mass times velocity) needs to be conserved – so the smaller body is more likely to get pushed around if hit or pushed by something. Wind and water forces could be more problematic. If small enough the terminal velocity could be lower and could fall from higher heights. If very small, things like surface tension could be more important. Lighter smaller weapons may not cause as much damage.

The surface area goes as the square. So as the person is smaller, the ratio of the surface area to the volume becomes larger. This means that the amount of heat lost could be larger, and it could be harder to stay warm. That might be one reason why smaller creatures need to eat more and have higher metabolisms. Due to the smaller surface to volume ratio there is probably a trade off between the amount of energy that the little person can store and use. A normal sized person uses about 1400-2000 calories per day resting or moving around. A tiny person would not use as much energy in total, but proportionally would probably use more when resting, and would not have the reserves of a large person.

The ratio of size of relative objects, and the surface roughness of objects is likely to be important. Being light and strong- perhaps climbing is easier, but there might need to be a lot of climbing.

So with some of those kinds of things in mind for your list of questions.

Blindness Due To Eye Size – photoreceptors are not a problem – can be pretty small – lots of animals with small eyes. Lenses can also be very small. There is some concern with how much light gets collected, but photoreceptors can compensate.

Deafness Due To Ear Size – again not that big a problem – there are lots of way small sound sensors can be made there could be some changes in the frequency range of hearing if you really go to an extreme. There can be some issue with how much sound gets collected by the external ear but detecting vibrations should not be an issue.

Literally Bursting Into Flames Due To Heat – not a big issue unless other small things like paper and leaves are bursting into hear. Temperature regulation due the surface area to volume ratio could be an issue though if hot or cold. Smaller Than Current World's Shortest Mobile Man - The toddler answer given above is pretty convincing that this is probably not a problem. Unable To Perform Basic Functions (Eating, Breathing, Drinking, Etc.) – I think lots of small animals are fine with being small.

Strange Proportions – this is harder to figure out- but I think proportional to the head, the ears might be larger, and the eyes might be larger, not sure about nose. Limbs to torso ratio seems like they could be about the same, but might want a larger torso to help store energy.

Mental Side Effects – if true human biology – I think the Toddler brain answer and chimpanzees and other small primates indicate that a brain size about the size of a human fist could be pretty intelligent. If you take some license and look at birds or dogs they have smaller than human sized brains and do pretty well. Small finches can memorize very complex songs, parrots can have big vocabularies, crows use tools. Etc.

To answer your question – for something on earth that evolved from modern humans for whatever reasons – you could probably end up with pretty small people 18 inches to 3 feet talk that could be active and intelligent etc. The might look a little odd- depending on what kind of climate they evolved in to help with the temperature regulation.

To take more license and for a non-human evolution starting point- especially if there was some augmentation and genetic engineering involved. I think you could have small active humanoids in a story that might be as small as 6-12 inches that could be intelligent complex tool users. To make really tiny people – think you get further away from biology and have to throw in some technology to augment the purely biological systems if you want them to be human like.

Not the answer you're looking for? Browse other questions tagged biology evolution humans genetics or ask your own question.

5
How “young” can a non-aging person be and still function?
3
Giant size variations
5
How quickly could a “shapeshifter” lose mass, realistically?

28
How can I make a net beneficial genetic trait occur only in a small fraction of the population, sustained?
5
How long can Joe go without liquid water?
18
How small can an organism get?
15
How small can humans be before weird stuff starts to happen?
6
How can I use magic to make this change in human reproduction feasible without hurting genetic diversity?
5
How hot can I make the insides of my spaceship before damaging crew too much?
26
How can I make manure without cows?
5
How “young” can a non-aging person be and still function?
6
How much floofy can my werewolves get without making thermoregulation a problem?