Could a life form that uses superfluids as part of its biology exist?

I've read in places that the issue for life outside of Earth and especially the theorised silicon lifeforms is that the existence of solvents is complicated and depends on the molecule chosen and local pressure and temperature.

This post explains some of the physics of large scale superfluids (which I still have trouble understanding) but would it be possible for a planet that has an atmosphere around 74 bars and 31°C to have CO2 superfluids just… going around? And let's assume the superfluid is able to have a role in the biology of the local lifeforms. Would it be more likely to have it replace water or oxygen? I would assume water, because of it being a liquid and flowing down to oceans and all, but then again if it acts like a gas then it would be breathed and that would make the lifeforms quite… unusual to us, am I correct?

I think you're confusing a superfluid with a supercritical fluid given that your temperature and pressure is basically at the critical point for supercritical co2. These are significantly different states of matter.

Liquid matter will typically go through a phase change when heated or decompressed (boiling). Conversely it will go through a phase change when compressed or cooled (condensation). This is characterized by a dramatic change in density and volume at a constant temperature. When boiling water the temperature stops changing at the boiling point and all extra energy is put into the phase transition of liquid to gas (look into the latent heat of vaporization). This energy will be released when the vapor is condensed. In fact when water freezes (another phase change) it heats up the surrounding environment video demonstrating this. Supercritical fluids do not undergo a phase change, they continuously increase or decrease in volume with changing pressure and/or temperature.

Superfluids are much more bizarre and are closely related to, but not the same as, Bose Einstein condensates. To begin there are basically two kinds of stuff: Bosons and Fermions. Fermions are what we typically call matter, and any two cannot occupy the same quantum state at they same time. This is why negatively charged electrons do not collapse into the positively charged protons of atoms but instead occupy different energy levels. It's also what supports neutron stars against gravational collapse (look into degeneracy pressure). Boson have no such constraint, for example photons, which are Bosons, pass right through each other without colliding. Their phases may interfere resulting in interference patterns and the like, but they can exist happily in the same quantum state. Now, protons, neutrons, and electrons are all fermions BUT, due to symmetry some atoms are actually bosons, such as helium 4 (two protons two neutrons). When supercooled it will condense into a Bose Einstein condensate and become a superfluid. This is not only the source of some superfluids but is also the reason behind low temperature superconductors (look into Cooper pairs and BCS theory). Two electrons pair up to become a boson in a material and all fall into the same lowest energy state. Since they are in the lowest energy state they can no longer give up energy to their environment (i.e. electrical resistance) and the material becomes a superconductor with no resistance.

I know this may not be exactly what you're looking for but I hope it helps to distinguish supercritical from superfluid.

EDIT: (Note this is pretty hand wavy) One way a biological life form could benefit from living in a supercritical environment is that they could evolve to exist over a much larger range of pressures. Since they do not have to worry about their blood boiling like we do when we are in a vacuum they could exist in space as long as they kept their body temperature up. The supercritical fluid inside would still expand in volume the same amount but it wouldn't violently boil, which could allow them to slowly "vent" out. The process could be reversed when returning to a non-vacuum environment. However, if they crossed the phase line between liquid and vapor below the critical point they would experience boiling or sudden condensation, potentially killing them. Here is a phase diagram showing what I mean: 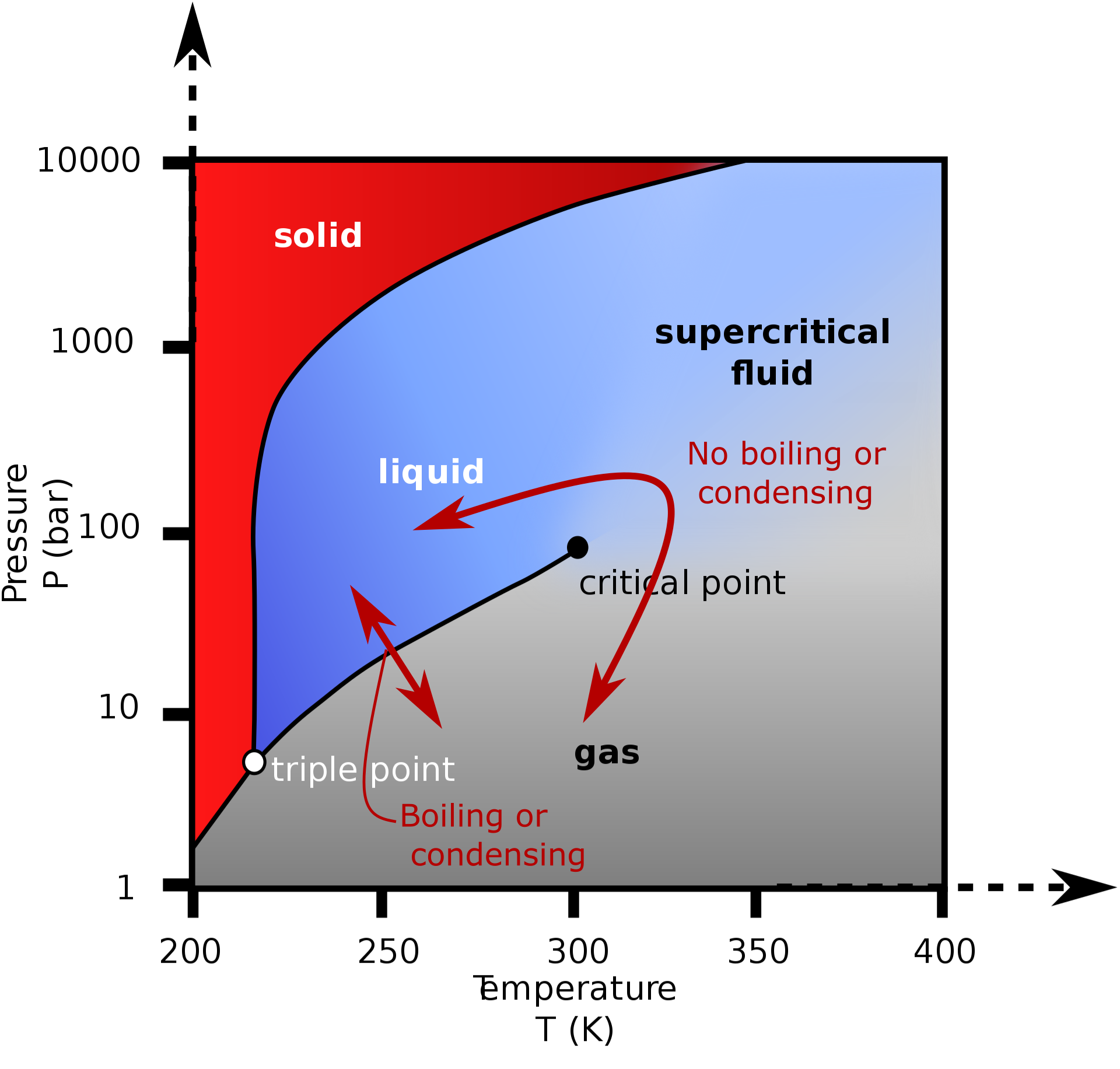 Not the answer you're looking for? Browse other questions tagged reality-check biology physics astrophysics or ask your own question.

16
Can the fleshmoles breathe?
3
Are all combinations of right-handed and left-handed amino acids and sugars equally likely?
9
Is this planet's atmosphere stable and reasonable, and anything to keep in mind for lifeforms living in it?
6
Rivers flowing uphill
7
How would an ecosystem based around chemotrophs produce oxygen?
2
Shrinking people and objects - what physics could accomplish this?
11
Defining a superfluid ocean