Space explorers have landed on an Earth like planet and, to their surprise, the place is luscious and covered in life, to the point of resembling some earthly tropical atoll.

What they don't know yet is that the entire biochemistry of the planet they are exploring has opposite chirality with respect to theirs.

Once you have a polarimeter, measuring the chirality of certain molecules is a rather easy task.

Is there any way for them to detect or at least suspect that something is odd with the local chirality, before they measure samples with a polarimeter?

To be clear, I prefer something empirical. For example to observe if a substance is fatty, one can simply spread it on a surface and observe how water interacts with it, without needing any more complex instrument.

Among the exploring crew there is a biologist and a chemist.

biochemistry alternate-earth exploration
share | improve this question | |
edited May 8 at 2:45
L.Dutch - Reinstate Monica
asked May 3 at 7:03

This is tricky because to some degree it requires the crew to expect the local biochemistry to present one way and know to be confused when it doesn't.

An alien landing in an orange grove wouldn't know what to expect oranges to smell like, for example, let alone wonder why they don't smell like lemons. The molecule responsible for the smell of oranges and lemons is chiral; limonene is R-enantiomer in oranges and S-enantiomer in lemons.

Citalopram, an antidepressant, is produced as a racemic mixture, but only the (S)-(+) enantiomer is responsible for its beneficial effects. The drug d-penicillamine can treat rheumatoid arthritis, but l-penicillamine is toxic.

We couldn't expect either reaction when taking an unlabelled pill, let alone suspect chirality is behind the results. Similarly your explorers wouldn't know what to expect of the local organic biochemistry.

There are ways to observe chirality at the macroscopic level without a polarimeter:

The chiral signals of the d- or l-Trp residues are seeded into poly(acrylamide) (pAAm)-based hydrogels (d- or l-Trp(x)-gels), in which the chirality is successfully transferred and amplified to the macroscopic scale. The interactions between the pAAm-gel bearing βCD moieties (βCD-gel) and the d-Trp(x)-gel and L-Trp(x)-gel are investigated in aqueous solutions with different components. Under appropriate conditions, such as in aqueous NaCl, the βCD-gel can successfully discriminate the d-Trp(x)-gel from l-Trp(x)-gel on a macroscopic scale by amplifying enantioselective host–guest recognition through interfacial multisite interactions.

But again your explorers would already have to suspect chirality to perform this test or one like it.

With my answer I wanted to go into a directly observable clue if you know the physics behind circular polarised light and bragg reflectors. However while you can make this to work for expecting chirality, I haven't found a way to directly suspect different chirality without using an external light source. So I have added two answer, one regarding alien ants and a second extensive one giving my thought on how you might be able to get a visual distinctive clue about strange chirality.

So your explorers are enjoying lunch and a cup of coffee during their lunch break whilst exploring. But even on alien worlds you can't have a picnic without ants (or whatever passes for ants on this world) showing up and trying to grab some food. However these ants only seem interested in the artifical sugar (Tagtose) used by one of your explorers instead of the normal crystaline sugar. It would seem quite weird after a while a small stream of insects carrying away your artificial sugar just past your sugar cubes.

The reason is that (as pointed out in the comments) chirality can matter a lot in nature and affect smell, taste, toxicity and other things. The insects pick up on this nature and since cyrstaline sugar is left oriented (most often combination of D-glucose and D-fructose I think) while the artifical sweetner is right oriented. Disclamair, I am physicist not a chemist or food scientist so I can have it completely wrong but I just gave two examples but there are many more to choose from. Some lactose are right oriented and most sugar have a right oriented enantiomer. I think fruit sugar (levilose) is one, however here I am not certain if the molecular chirality and the optical rotation properties match. Depending on your story and how strict quarantine rules are you can of course setup a single experiment to see how the local wildlife interacts with your food and come to the same conclusion without taking off your hazmat suit in an alien environment.

So instead of the molecular chirality you want to measure the optical rotational polarity and get out your big polarimeter. It might turn out not to be so big, Ultrathin, flat lens resolves chirality and color. So with this lens you can easily image the chirality of the exoskeleton of a beetle as shown in the paper. 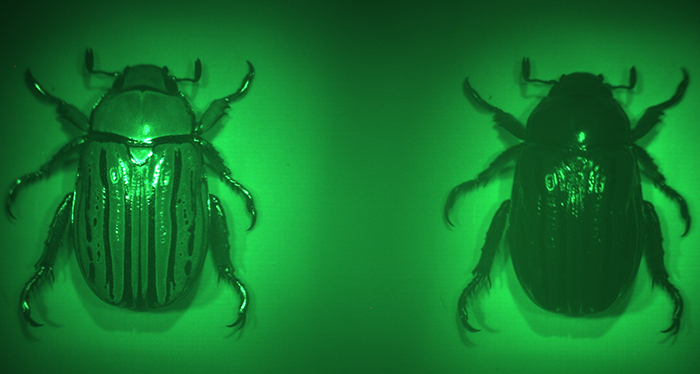 With a little bit of tuning your world you might be able to check for chirality and even suspect that it is opposite from what you would expect. I will assume here that the rotational polarization direction and chirality are one and the same.

So as seen with the beetle a bunch of insects have chirality based on structural optics. One of the most beautiful and easily observed examples is with butterfly wings shown in Fig 2a, where the the right wing was saturated with alcohol. Fig 2b and 2c show the TEM cross-section of the wings. 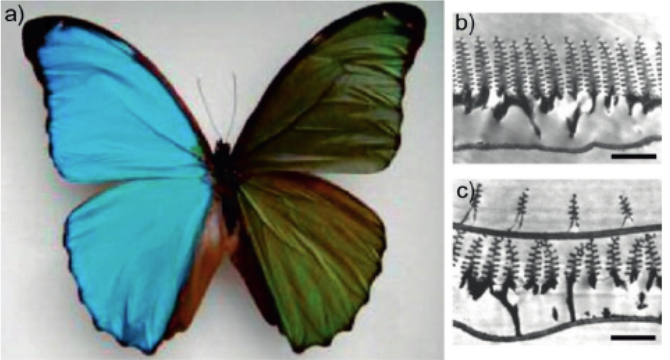 The color change in this case is based on an expansion of the structure of the wing which influence the reflection of light due to a change in layer thickness of a Bragg reflector. A Bragg reflector, reflects or transmits light based on the interference pattern created by the controlled layer thickness, see:Dielectric mirror and Fiber Bragg grating.

How to detect the different circular polarization direction

So it is easy to see structural color (it looks colorfull) and to determine it is indeed structural by pouring alcohol over it. It is easy to detect linear polarization, just look through your polaroid sunglasses, turn them 90 degrees and look again. If the polarization axis are aligned with your glasses the butterfly wings should turn from looking normal to completely black. If you look at circular polarized light through linear polaroid sunglasses the intensity would simple half irrelevant of direction, making it distinguishable from linear polarized light but not from un-polarized light (which would also half). This is where some story telling should come in.

Sorry for the long winded answer but I wanted to explain an at least feasible optical solution. Here some extra material if you really want a rigorous physics calculation:

Not the answer you're looking for? Browse other questions tagged biochemistry alternate-earth exploration or ask your own question.

4
Evolution of eyesight on a planet with a Methane biochemistry?
3
How does biochemistry relate to nutrients needed for life?
2
Exploring extraterrestrial oceans with submarines?
6
Biochemistry (mostly) Questions for Science Fiction
4
Biochemistry of Plants harnessing heat-energy when blue-shifted light is scarce
8
What could be used as an alternative to ATP in boron based biochemistry?
19
What could prevent a thriving civilization from exploring neighboring lands/continents?
4
Consequences of magic allowing biochemistry to happen at range
3
How to make ammonia-resistant organisms through their biochemistry?