how big does my creature's organ need to blind or stun predator of all size? 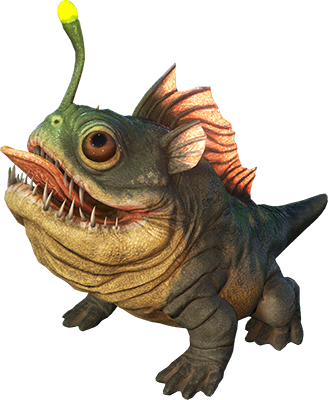 I want my creature to have the ability detailed above and to be able to use it against attackers (of any size). How big does its light organ must be to produce that much light? and how many times can it do it?

The human eye has a blink reflex of about 1/4 of a second.

Maximum permitted exposure related to a light source equivalent to the sun, and when the pupils is constricted to about 2mm in diameters is a little under 2 Watts per square centimeter. 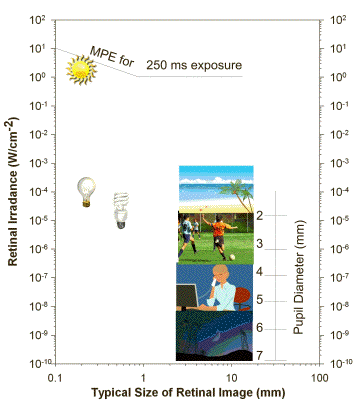 So you probably want an organ to be able able to produce that much light intensity at some distance lets say about 10 ft or 3 meters, if the diameter of the spot was about 20cm, then pi r squared give the need to illuminate about 300 square centimeters or about 600 watts.

That might be a problem if the creature needed to produce 600 watts continuously. For reference a human at rest is about 100 Watts in just the thermal energy it radiates. A resting human probably needs about 1400 calories for its base metabolism. To compare: 600 joules per second* 86400 seconds per day divided by 4184 Joules per calorie would mean the creature would need about 12,390 extra calories per day just for its light source. Thats about 30-40 ham sandwiches.

However, to dazzle, if it is pulsed light that needs to be only 1/4, maybe 1/2 a second, each light pulse would only need a fraction of a calorie.

The next problem is the efficiency of getting the light out of the creatures body. The sun's rays are parallel by the time they reach the earth, and that is important since that helps the dazzled creature eye focus the light onto the dazzled creatures retina. If the light is being produced in all directions inside the creatures body, then most of it is going to be absorbed in the emitting creature's body. That might be o.k. but it might need some kind of reflective coating around the organ, and that could be tough compared to a photoreceptor and even be able to take some heat build up per pulse. Since it is a fraction of a calorie, we could say the creature might use up a ham sandwiches worth of calories per pulse and still be o.k. if the creature didn't pulse too often.

Now to answer the question about the size of the organ needed. The nice thing about bioluminescence is that is is about 96% efficient and little waste heat is produced. 1) If it is the bacteria themselves, I suppose you could try to have them coordinate to all flash at the same time. That could be stimulated by a chemical signal, or perhaps telepathic signal by the creature. 2) If the creature extracts the needed chemicals from the bacteria, it could have a more concentrated biochemical light source, but would need some mechanism of keeping the component chemicals separated. However this might have the advantage of being much more efficient per volume.

With approach 1 there are issues in having good ways to feed them, keep them alive, but also the energy density is probably a factor of 10 or perhaps 100 x less than mixing the component chemicals. If it is approach 2 the chemicals there probably needs to be some kind of storage, and specialized membranes to purify and keep the chemicals from reacting and tissues to mix the chemicals when needed.

From an Encyclopedia Britannica for luminescent materials

Assuming a two types of molecules with a total atomic weight of 100, (100 grams each per mole) that would react and excite different molecule to be excited for another 50 to 100 grams that that would release the photons. That might be about 300 grams for the chemicals. The for the system perhaps as much again in for grams for the tissues, that would be about 500-600 grams which is about the size of a large human fist. You might make it a little bigger for optics, or the cavity, and make it longer to have a better telescope or something. This assumes the reacting molecules all react quickly, but there might actually be a longer glow after the chemicals were mixed.

There are probably some bad chemistry assumptions but for a ball park without getting into the details of the molecules and how they react etc. it might give a rough idea.

Since volume goes as the cube. if the chemical method was about 10x10x10 cm, and the energy density of the biocells was 100 times worse, you need a volume of about 46x46x46 cm.

I think you need a late twilight world where bright lights are rare. On such a world, those lifeforms which even use sight as one of their senses, would have large eyes with greater dilation ability than comparable creatures on brighter worlds.

Speaking of that dilation ability, if your world is very consistent in its' light levels, the muscles devoted to changing the aperture of the eye might not evolve great speed and agility. If the difference between noon and midnight was very small and flashes of intense light were very rare, then there would be little survival advantage in having fast eye muscles.

In this kind of environment, your creature's light emitting abilities would have to be novel and revolutionary (new on an evolutionary scale) or its prey would have started evolving faster eye muscles by now.

So finally, we have a platform upon which your question can be answered. In a dark world, the quantity of light needed to stun the eyes would be within the chemical potential of bio-luminescence. The creature's organ should have eyelid like shutters so that it can build up the brilliance inside with lids closed, then snap them open for a blinding flash. If the blink rate of those lids were synchronized to the dilation rate of their favorite prey, they could flash at exactly the right speed to keep their prey's eyes wrongly dilated for the current moment's light level. If their own eyelids were wired up to blink at the exact moment of each flash, they might be able to keep their own vision while disabling that of their prey.

So to finally answer the question, if a eyelid like shutter is employed to keep the continuous light hidden most of the time, then the organ only needs to be big enough to house and symbiotically maintain the necessary quantity of luminous bacteria. That can be relatively small as long as the organ has the strong blood supply necessary to keep the bacteria well fed.

There would probably be no limit to how often it could use the organ because inside the closed shutters, the bacteria are always glowing; but with the exposed location of the organ and the requirement for a heavy blood supply, the organ would probably also be the creature's Achilles heal. The natural reaction of any prey, which was lucky enough to not be immediately blinded, would be to attack the source of the light. If successful, such an attack would not only level the playing field, it would leave your creature with a heavily bleeding wound that might possibly be a fight-ending/life-ending injury.

Afterthought : It isn't necessary that the entire world be late twilight. If the creature were subterranean or if it lived in a massive forest in which the tree canopies blocked all light from reaching the ground. Such a localized dark environment would either need to be enormous or isolated by un-passable lands on all sides to keep it's inhabitants isolated in the dark. In such conditions, the evolutionary forces which I described above could still apply, despite there being high-light-tolerant, fully sighted creatures elsewhere on the planet. Please note that your creature's dazzling display will not be as effective against those outsider creatures who evolved in brighter conditions and as a result have more experience and biological preparedness for sudden light level changes.

The real trick is aiming. As AlexP points out, at night a laser pointer can provide a tremendously powerful disruption. Of course, during the day, the sun is really hard to outshine. It will be hard to generate enough light to even show up during the day, much less be dazzling.

Use it to your advantage. Put a reflective membrane on the light source to point it in the direction of the predator. During the day, use the same reflective membrane to reflect the sun in their eyes. As an added bonus, you can apply some musculature to this to shape a lens of the right focal length to target their eyes directly.

When preparing for the last solar eclipse, I did the calculations for just how bright a mere 8" telescope makes the sun appear when it is focused on your eye, and how long it takes to not only dazzle but to cause permanent irreparable damage. The answer was not freaking long. Terrifyingly short, actually, as one gets ready to watch an eclipse through said 8" telescope!

You can simply make it nocturnal and it becomes quite simple. At night, many creatures' pupils widen and enlarge, seeking out any light they can find. Flashing a bright light at these night predators will probably stun them almost as badly as staring at the sun for a brief time, leaving them incapacitated enough for your creature to get away before the creature comes back to its senses.

However, if you're looking for a distraction that will mesmerize predators and prey alike, I have two other great adaptations. Cuttlefish use chromatophores in their skin to stun any prey that look at them, making them unable to move. Meanwhile, the cuttlefish's cousin cephalopod uses ink to disorient predators. Instead of ink, you can use a heavy dark gas. Some octopus ink is toxic enough to leave a bad enough taste in a predator's mouth to lose its appetite.

Not the answer you're looking for? Browse other questions tagged creature-design evolution light sea-creatures zoology or ask your own question.

14
How does animal size affect individuals' agility and speed?
5
What kinds of animals does insular dwarfism affect and how large does an island need to be to escape it?
5
Determining the energy efficiency of a Light Wand
10
What attributes and how big would a sea creature(s) need to be to tow a ship?
2
How big does a pelican type creature need to be to carry a grown up human inside its mouth and still fly?
2
questions about my screeching wyvern?
5
How to design a proper void whale?