What will the abdominal muscles of non-primate humanoids look like?

After looking at concept art of various humanoid creatures portrayed in science fiction I noticed many artists tend to make the abdominal muscles of their creatures/aliens look similar to those muscles found in humans and other primates.

I would like to know if a non-primate mammal/reptile/bird does become humanoid (perhaps through the process of convergent evolution) how different would their abdominal muscles realistically look like compared to those of primates? 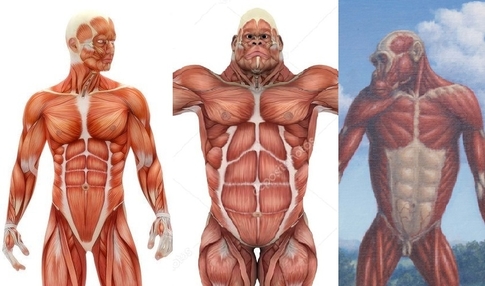 Not a lot different, really.

Well, as it turns out, with evolution being what it is, animals being descended from earlier kinds of animal; it should come as no surprise that the anatomy is going to be relatively familiar across species.

The images shown here demonstrate that even between amphibians and mammals, there's quite a lot of similarity --- the musculature comprises homologous structures. You can clearly see the pectorals, rectus abdomini (six/eight pack), the external obliques.

As for the motivations of fantasy artists, I've noticed that, anatomically speaking, when it comes to werefolk of one kind or another, artists tend to plop a cat or dog head onto a human body, cover it with fur, give it an anatomically incorrect tail and call it a day. They don't make tiger people's bodies look very tigerlike! I think the reasons for this are twofold: first, trying to figure out what a feline body will look like after millions of years of evolution into an upright posture is no easy task. Bones will lengthen and change shape; joints will move differently; muscles will alter their place and function. The resulting body might look something like a human body -- maybe thinner and more flexible -- but its shape will be quite different even though the underlying muscles will all have human homologues.

The second reason is boobs. Yep. Whenever we see a Werecat or Werewolf or Werewhatever female character in fantasy, what do we see? Wide human hips and big human boobs high up on the chest. If you've ever owned a girl cat or dog, you know that wide hips and high boobs are not a thing among most animals. I suspect that a real Werecat would retain a relatively narrow pelvic girdle and six or eight tits along the abdomen. Not very sexy for movies, but, that's reality check! 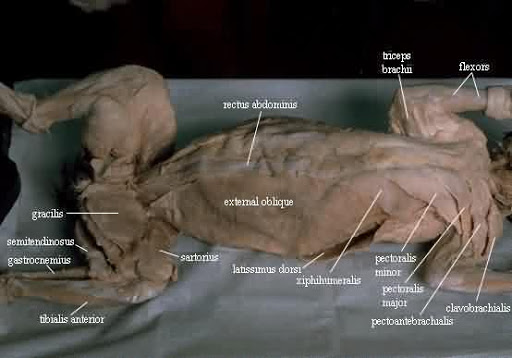 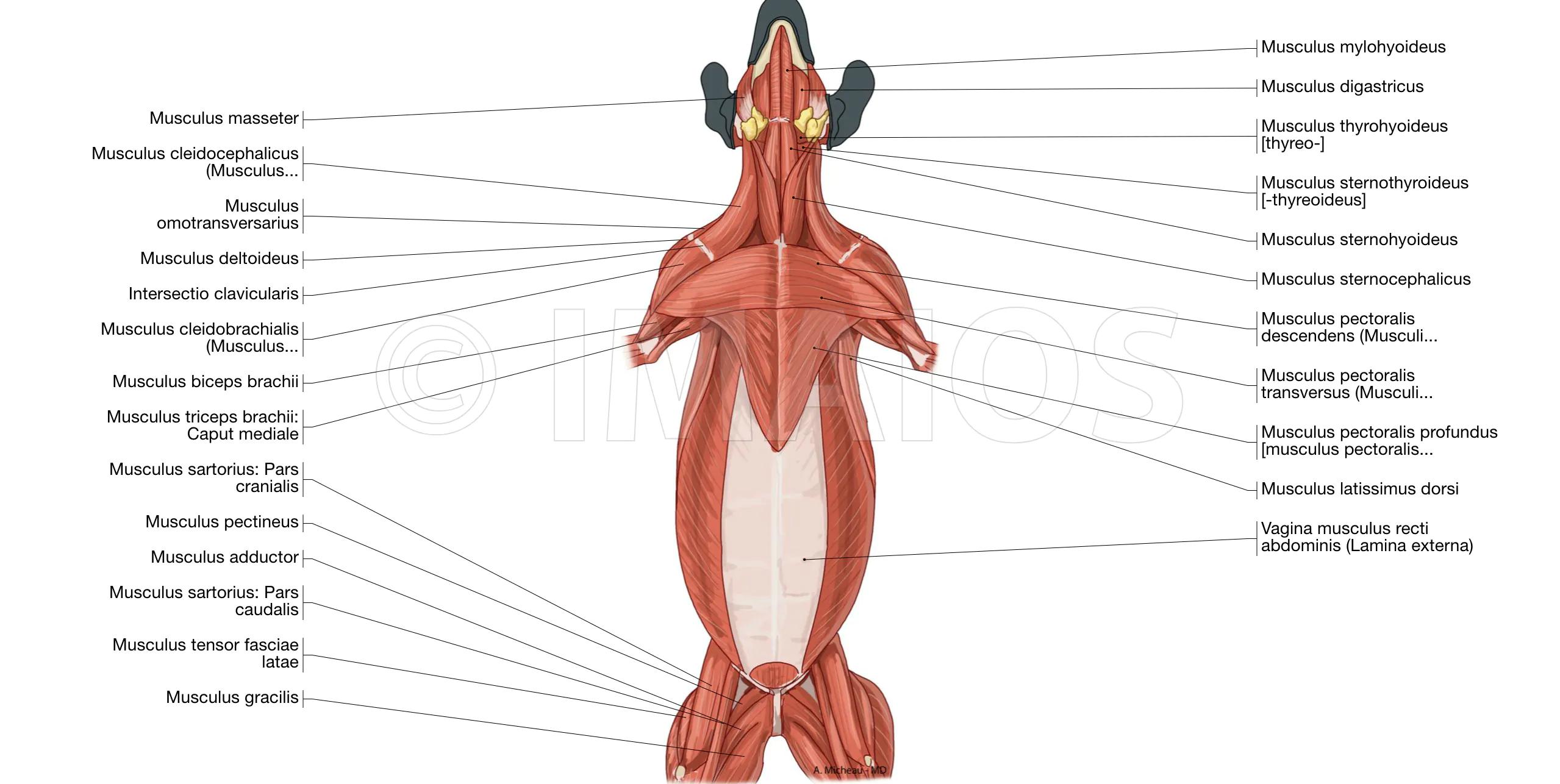 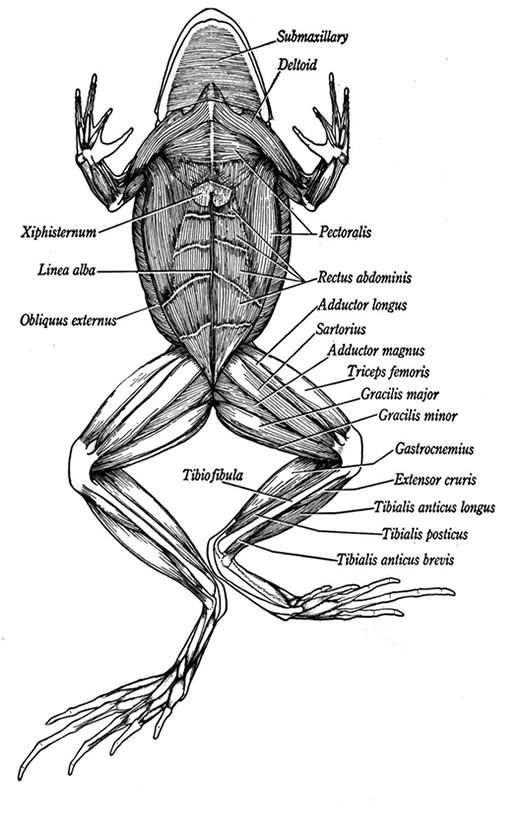 Only if it is a mammal.

if it is mammal not much will be different, mammals are pretty conservative in their anatomy. frogs have a similar muscle pattern, frogs are really specialized and derived and have lost a lot of bones(this is also why they should not be used for high school dissections, they are misleading).

but Basically all other vertebrates have ribs all the way down, the major exceptions being crocodiles (which have gastralia so still no six pack) and frogs which can have six packs and a few squmates which have a lumbar region too but it is pretty rare.

If they are crocodiles, birds, dinosaurs or any of the archosaurs, it is impossible. These groups have gastralia which is an extra set of ribs in the belly. A therapod for instance will not have a six pack the closest it could get would be a 40 pack thanks to all the gastralia. 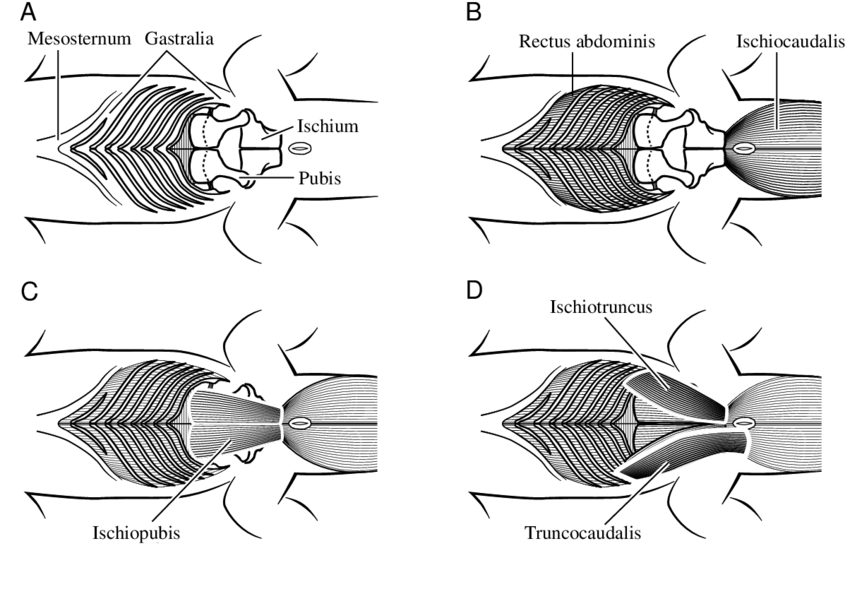 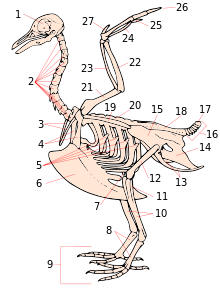 there are plenty of other complications as well, in birds for instance the wing muscles cover the entire stomach reaching the pelvis even, and you have things like turtles with shells.

11
If quadruped mammals evolve to become bipedal will their breast or nipple change position?
12
Would female humans have more breasts if they had bigger litters?
2
How make look feminine and masculine (non mammalian) animal humanoids?

110
Would intelligent life evolve any other body plan than humanoid?
3
How does an Alien world have Earthlike creatures?
8
Keeping One's Figure - Myostatin Regulation
8
What Would a Reptile with Facial Muscles look like?
12
Feasibility of humanoids that evolved from non-primate mammals?
3
What can I expect these humanoids to look like?
8
Anatomically correct Quetzalcoatl
2
How make look feminine and masculine (non mammalian) animal humanoids?