I'm designing a fictional race of bird people with human level intelligence. They have 4 limbs, a slightly curved upright stance and roughly 2m in height. Their hands and feet have 4 digits, 2 of those in the hands are opposable and dexterous enough for making/handling tools. Now, my main issue is designing the legs. As most are flightless, I planned for them to have adapted towards a more cursorial (adapted for running) path, and therefore wanted to make their legs similar to those of an ostrich. The issue is: I'd also like their legs to allow for some degree of climbing and, in extreme cases and much less relevant, swimming (their habitat is composed of large plains and decently large trees, located decently apart from one another). The issue? The leg design of ostriches is basically useless for matters other than standing up, running fast and for prolonged periods or kicking a lion/human to death. 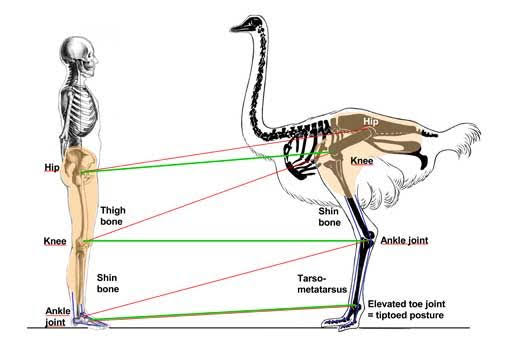 In this comparison image, we can see how the ostrich's legs rely a lot on their tendons for the movement, which is what makes them so good at running but so bad for anything else (yellow is muscle, blue is tendons)

Given that my bird people already have arms to aid in the climbing (along with hand talons from their predatorial ancestors) , I'd think that having a zygodactyl foot, but with the 2 opposing digits located a bit higher up on the leg, as well as having slightly more flexible ankles capable of some rotation would be enough to solve the problem, but I'm having trouble implementing these on the leg, since I haven't found any good real life example of what I want. Can I make these legs capable of some climbing capability? I'm interested whether my assumption on the leg design is correct and possible to implement, or whether there are better ways to solve the climbing problem.

The plausibility of this part of their anatomy from an evolutionary perspective isn't necessary, but it'd be appreciated.

The way that apes climb isn't the only (or even necessarily the best) mode of climbing. For instance, goats and big horned sheep are excellent climbers, mostly through having an keen sense of balance and tremendous eye-leg coordination; they leap from one tiny outcropping to another, and can quickly scale the side of a hill or certain kinds of trees. Cats (big and small) and squirrels manage similarly, with the addition of claws that can dig into wood. Ape physiology is designed more for hanging, swinging, and reaching, letting them move along and between branches in a tree, but I can easily picture an ostrich-like creature that uses its lower claws the way a human might use spikes to climb a utility pole, or that leaps its way from rock to rock or branch to branch. They might also use their wings to flutter up short distances (the way turkeys and grouse do).

As far as swimming goes, most birds will float so long as their feathers are properly maintained and oiled. They tend to drown if they get waterlogged, or die from hypothermia. Swimming is nothing more than floating with propulsion, and while ostrich legs are not well-designed for kicking along in water, they would probably serve for slow movement. Depending on how their arms are constructed, they might even manage something like a decent breaststroke. I don't think they'd last long in an ocean, but getting across a river or smallish pond shouldn't pose too much of a problem for them.

I imagine that birds have had little need to develop climbing when flight is so much more efficient for getting up higher. Large flightless birds like the Ostrich have all evolved in large open spaces with very little verticality anyway. Maybe coming up with an evolutionary reason why their ancestors opted for climbing over flying might explain the structural difference.

Animals that have a sort of bridge point are bats and flying squirrels (closely related unsurprisingly). A major similarity of both those animals, as well as small birds that have adapted climbing, seems to be the location of the last joint before the toes (ankle) being far closer to the toes. That seems to be part of what gives the additional flexibility for climbing if I'm not mistaken.

Since this would very much contrast the speed oriented design of an ostrich, I might recommend the idea of giving this species an extra joint to act as a second ankle, or more accurately use the existing ankle as a second knee. Of course the number of joints is kind of locked for all known vertebrates on Earth because of common ancestry, but I see no reason why either a fantasy or scifi universe couldn't evolve creatures that do not follow this base plan. This sort of structure would require extending the muscle down to the second knee, or some sort of mechanism to lock the lower ankle, which may also be achieved by extending musculature.

Not the answer you're looking for? Browse other questions tagged creature-design avian .

9
Asymmetrical Limbs
6
Geckos walking on two legs
8
Is knuckle walking possible in a cursorial animal?
4
Are flexible digits viable for both running and climbing?
4
Why would my race have arms much longer then the legs?
4
What would be the best design for a a versatile humanoid leg, but at the same time pretty good in every function (universal leg)?
8
How would the anatomy of a bird that flies with its legs work?
9
How do the eggs of birds that fly using their legs not crack?
5
Ecologically Correct Juvenile Phoenix