Note: This is for a game. However, players can't directly control the creatures I'm talking about. They have their own AIs that fight, and I'd like to make it look realistic.

I've seen the idea in several places (I can't remember them all) of having a creature with a tail that is sharp or has some other weapon on it. However, I'm wondering, how would a creature like this keep its balance?

Most (real) animals use their tails for balance, if they have a long tail. However, if a creature is swinging its tail around at an enemy, especially a tail with a heavy weapon on the end, wouldn't that knock it off balance?

Having said that, here is what I'm wondering: Is it feasible to use a tail as a weapon? What would need to happen to make it feasible?

Feasible? How about the Ankylosaurus?

Granted, they all died. But, that was likely not because they kept getting knocked off balance when using their tails.

Humans sometimes use their outstretched arms for balance, but that doesn't mean we can't also use them for swinging heavy things to hit stuff. If the animal has sure footing, and is not currently using the tail for balance, then it's fair game for swinging.

I once owned an iguana when I was a child. They have tails which are primarily used for balance, however they will also use them to savagely whip children who just want to hold them nicely. If the demon iguana was on a smooth countertop its whole body would slide around while whipping, significantly decreasing its power. If the demon iguana was sitting on carpet or clinging to a log though, it was able to get traction and apply full power to the child whipping.

"However, if a creature is swinging its tail around at an enemy, especially a tail with a heavy weapon on the end, wouldn't that knock it off balance?"

Tell that to the scorpion! 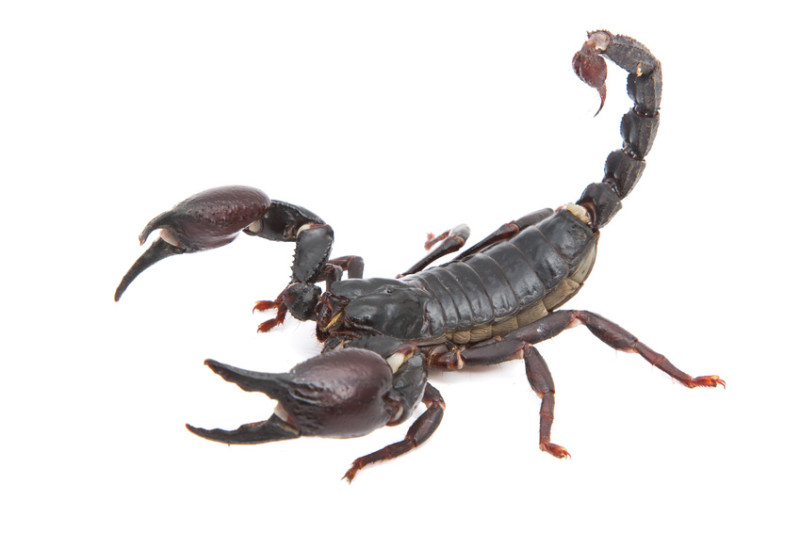 Obviously, scorpions aren't human-sized, but there's nothing intrinsically limiting about their body geometry to make their offensive tail ineffective at human scale. And this is a piercing attack rather than a blunt force attack, but again, I don't see anything which would prevent it from using it as a club instead (other than the fact that whatever weight is used to give it heft would be useless drag outside of combat).

You might say that the scorpion is cheating because it's using 6 legs for balance, but I'm pretty sure it would be fairly effective with just 4 as well. Bees and wasps not only use their "tails" offensively, they can do it while flying! How awesome is that??

A bipedal human-sized creature with arms and a prehensile tail like a monkey could simply use the tail like a 3rd arm, although, one would wonder why it doesn't just use its arms. If the tail were stronger than the arms, that would be one reason (maybe it has T-rex arms). If the tail is longer, it can create a greater moment swinging a mace or hammer, but only if it is correspondingly stronger. This could be another reason for using the tail instead of an arm. Of course, technology can make a hammer really long too, so if I were such a creature, I would use the tail in addition to my arms. Say, two swords and a dagger/spear/mallet/buckler/use-your-imagination. That could make for some very interesting techniques.

Quadrupeds generally use their tails for balance only when in a bipedal stance, usually as part of a tripod with their hind legs. Such an animal would have no trouble using a weaponized tail, since the quadrupedal stance is inherently stable. I would expect a fighting style from such a creature to consist of bracing itself on all fours facing away from the enemy and flailing away.

A biped constantly uses its tail for balance, shifting the tail to keep the animal's center of gravity over its base of support. Because of this, I'd expect the fighting style to be far more dynamic, with fancy footwork and body shifts used to maintain balance and add to the momentum of the tail (think: some of the fancier movie martial-arts styles, only justified by the need to keep your balance while on the move).

Think Kangaroos who can use their tail to stand on, to A) propel themselves forward, or B) lash out with both hind legs at the same time. ideal for martial arts and hand to hand combat.

Pangolin's are the only scaled mammals. With scales made of keratin and a semi prehensile tail with sent glands near it anus (used for marking and self defense) it could be a deadly weapon... However as an insectivore they use their tails to roll up into an armored ball. (imagine air deploying that). Still their tail could be used to a more dangerous effect then an alligator or crocodiles tail given its greater flexibility, especially with the Pangolins curious habit of walking on their hind legs with their front feet held off the ground in front of them. 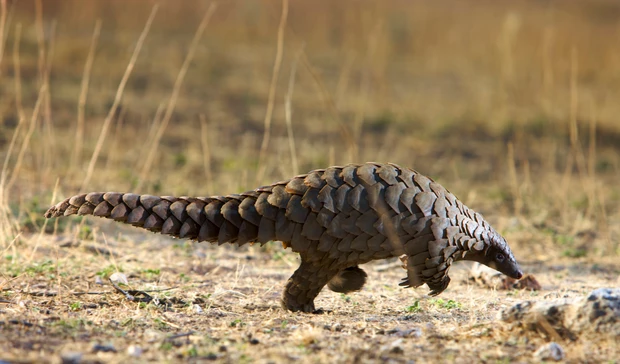 The Thresher Shark's weaponized tail has a scythe-like upper fin nearly as long as its body that it whips forward at more then 60 mph. Direct contact can tear apart fish and the shock wave stun others. Unfortunately such a long tail is probably only practical underwater.

The poisonous piercing sting of the Scorpion has already been mentioned, But the stingray also has a poisonous sting however has a more blade like design creating a slash wound, although theses blades often break off in the wound to deliver the poison as its saturated in the flesh rather then secreted from a gland. (poison blades could be more useful then a club for a small frame). I used to believe that some stingrays could give a electric shock with their tails like a taser, But no that is just a popular myth.

The porcupine has a tail full of quills that it slaps in its opponents face leaving behind painful barbed quills, which means it does not have to have a lot of force behind its blows.

Other notes of legend are a bird with a tail fan of blade like feathers. Mythological creatures with a snake for a tail. The Kitsune (nine tailed fox) who's tails extend and contract at will. Some dragon tails that are toothed like a saw-blade, coiling around their prey like a snake cutting them in half.

If the creatures' tails were permanent, the most stable way for the creatures to walk would be on all fours, and quadrupedalism is somewhat less conducive for precision, which is necessary for scientific advancement.

However, if these creatures developed technology and modified their genetics to allow their tails to be extensions of their spine. Think about it, these creatures, in their normal mode, would be around 7 feet tall. When they go into combat mode, their tail would extend out of their body. This tail would not be weaponized yet, although some of the members of the species choose to have their tails spiked/weaponized.

At this point, their height is 4.5 feet, and they are automatically more agile dues to their decreased size. They now don their battle armor, some of the species attach blasters to their tails, some attach swords/blades, and others use prototype technology, which can allow for flight, stingers, etc. In this mode, they can go quadrupedal with weapons attached to their back and tails and claws on their limbs, or they can remain bipedal, and act as marksmen, infantry, horde control, with armors similar to Iron Man's, transforming suits that can make many types of weapons. Their tails acting as extra arms. They can also use their tails to jump and land.

A bit of anatomy

For those wondering how their tails retract and extend without affecting their legs, you can think of it as their spine/tail - the upper part, being attached to their head and arms, while their legs, hips, and pelvis are a separate part. If you were to look at their pelvis from the front, you would see a U-shaped hole, from the side you would see that it the opening to a canal that goes from the upper part of their pelvis to the lower part, the upper spine slides along this canal when it is retracting and extending, it remains attached to the canal via magnets. Their spine has powerful magnets embedded in it and their pelvic canal also has magnets embedded in it.

As for how the tail skin works. You can go about this two ways. The first way is simple - the creatures have hyper-elastic skin. The second way is probably more realistic. When inside the body, the tail is coated with a liquid that is kept as a liquid thanks to a special substance(gas) present in the creatures' bodies. When the tail is extended, it exits the body via a special opening near the small of the creatures' backs. When the liquid is exposed to air, it solidifies into a strong, tensile, nigh-impenetrable skin. The opening is also coated with this substance preventing the tail from retracting accidentally. All this happens in a fraction of a second. From the outside, however, the tail looks quite normal, the skin looking just like the rest of the creatures' skin. When the creatures want to retract their tails, their brains send out a signal that re-liquifies the skin and allows the tail to be retracted. Also, when the tail is retracted, the opening is covered with the hardened liquid.

Not the answer you're looking for? Browse other questions tagged science-based reality-check creature-design natural-weapons .

11
What would be the best fighting styles for a humanoid with a low center of gravity?
10
Would an anthropomorphic wolf species be able to hunt their prey without weapons?
16
How would a tail affect fighting styles? Or would it have basically no effect?
12
How can a nine tailed fox catch its prey?
10
Would my horned theropod dinosaur- like creature be able to lift his head and/ or balance?
8
Humans with a scorpion-like tail?
18
Lizardfolk and the problem of balance and anatomically sound tails
5
Anatomical Review: Would the way I designed this semi arboreal Imp be biologically feasible?
5
Powerful tail swipe with as little muscle as possible. How?
16
Why would having a lion tail be beneficial to a griffin as opposed to a bird tail?