I'm designing a creature who, begin an ambush predator, relies heavily on camouflage to hunt in its habitat, and since the place is filled with many different types of colors and locations, I wanted it's skin to have the properties of a Cuttlefish (has the ability to change both color and texture). Additionally, to give it an extra boost against potential predators, I wanted the skin to be thick and relatively loose, similar to a honey-badger's. Is it possible for an animal to have both properties? If not, what's the closest from having these two traits (3 if you discern between color and texture change) an animal's skin could have?

Note: the creature has an endoskeleton, preferably having an either terrestrial or amphibious lifestyle (possibly changeable, in case it's not possible for a land animal to have such skin).

I would suggest that the loose skin might create problems with the camouflage effect, as this could induce shading effects which the creature would be unable to compensate for. As well, since some of the colouration effects are predicted on the refraction and reflection of light from the chromatophores, there is the possibility that the chromatophores are going to be at the wrong angles to create the desired effects.

An octopus gets around this mostly by very creative mimicry, for example, I have seen a picture where the octopus "goes to ground" but leaves two tentacles exposed. They are camouflaged to resemble a sea snake, which gives would be predators a real fright. Octopii have a multitude of other tricks which call on their mimicry, camouflage and shape shifting abilities, but your description of the creature means the shape shifting elements would be difficult to replicate. 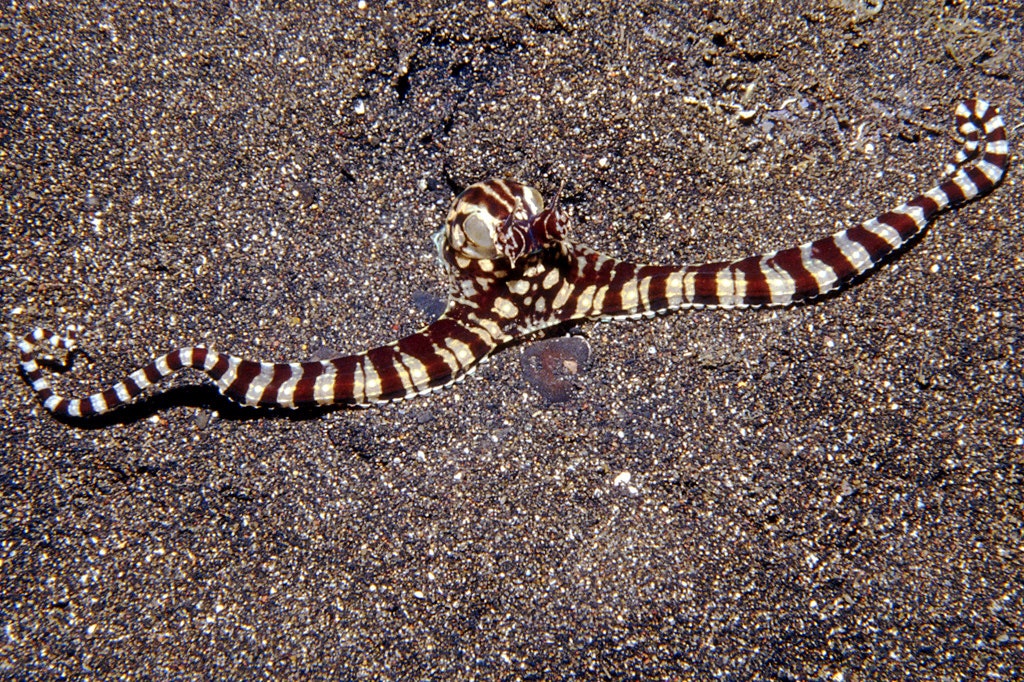 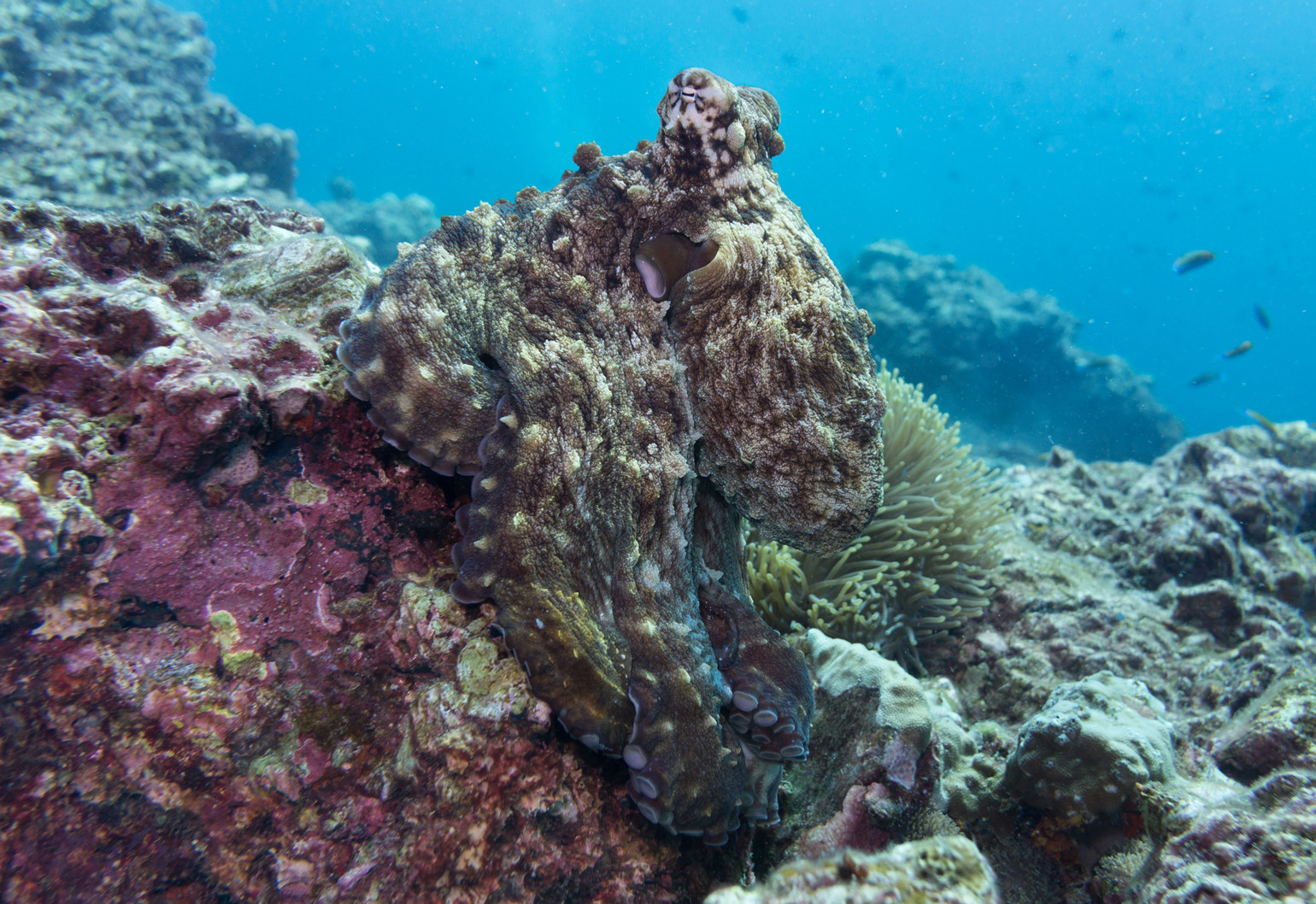 OK then, I'm a coral 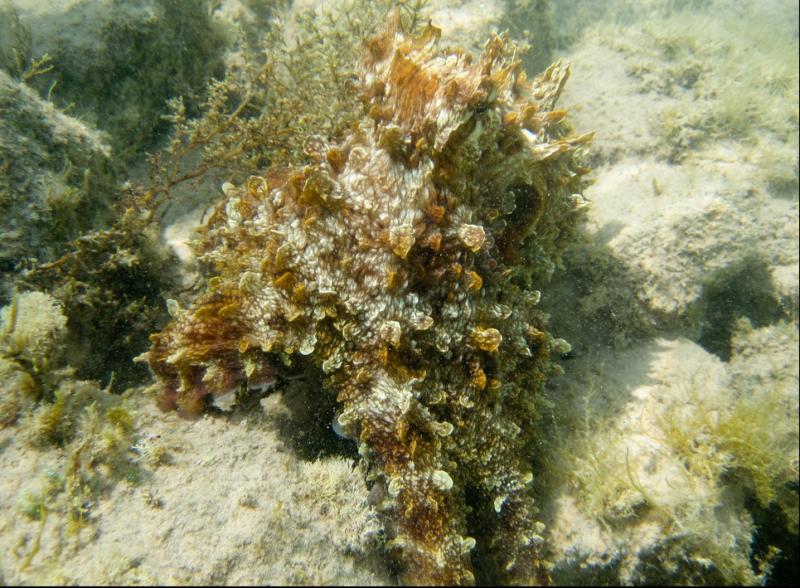 Don't believe me? Then I'll just be full of spikes and unpleasant!

I suspect the desire to do the camouflage would also be defeated by the desire to have a thick, armoured skin. This might not allow the chromatophores to function properly, and of course tears in the skin or scarring from combats would leave "blank spots" in the display, which would likely cause the creature to be discovered.

A creature with the octopus like ability to blend with the environment would indeed be an impressive ambush predator, but perhaps would be best to separate the camouflage from the striking ability. Long armoured tentacles like a squid, the ability to "spit" venom from ambush or some sort of chemical weapon like a bombardier beetle are some possibilities (a stinger like a scorpion is also a possibility). The prey wanders in close, and is startled by a sudden movement, which turns into being struck by the hunter's attack weapons. The prey is either crushed and dragged to be devoured (tentacles) or is poisoned and dies, to be devoured later. A Chameleon does something similar, striking insects out of the sky with it's long tongue. 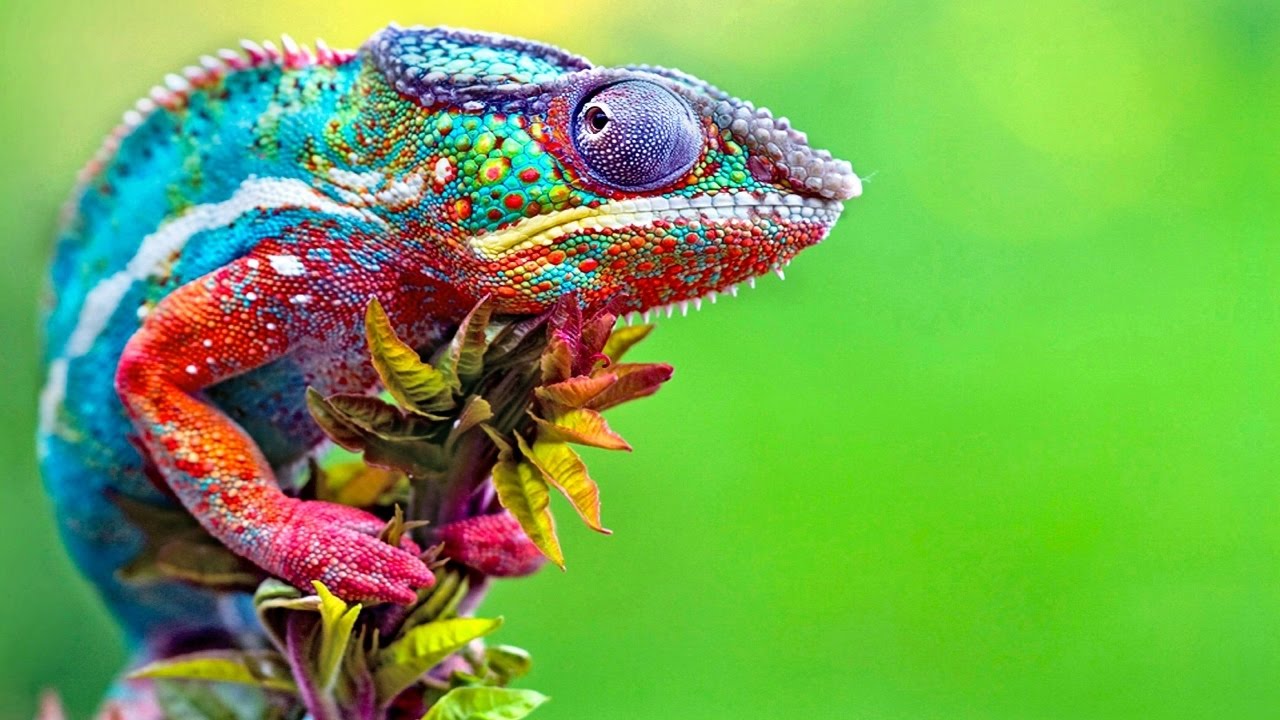 Come to the pretty flower...

This seems to be the more likely way an ambush predator with a highly detailed camouflage skin might work.

7
Alien skin substitutes
12
Mimics and wooden chests: chest-like monsters, or monster-like chests?
12
Is a four armed arboreal reptile as described viable?
8
Creating a scientifically semi-valid super-soldier, part 8: Communication
8
How to Train Your Mimic (or, why would a Mimic be capable of domestication)
10
What metals other than calcium can be used to create alien bones that won't also engender a human-toxic environment?
2
Anatomically correct Kryptonian, part 1