What would the sky view be like of a final stage massive merged galaxy?

What will be the view of the sky and the distances between stars, living on a planet or in a habitat in a super galaxy that has merged with all its nearby galaxies in its cluster, at a time in the future when everything else has expanded beyond sight?

There are artist's impressions of what the sky would look like when the Milky Way and Andromeda merge (see this video), but what would the sky look like and how close would other star systems be when we are at a final stage of merger with our superclusters? it doesn't have to be our future predictions for the Milky way but what is possible in terms of final supercluster mergers and super massive galaxies?

Cox & Loeb 2008 performed one of the few simulations of the Milky Way/Andromeda collision of which I'm aware. It's not particularly easy to simulate a galactic merger, so the lack of detailed numerical treatments shouldn't be that surprising. Nevertheless, they were able to determine certain properties of the remnant, which they showed would appear to be akin to an elliptical galaxy. We indeed would expect most mergers to result in elliptical galaxies, albeit with tidal features like tidal tails in the immediate aftermath of the merger.

Although there's no analytical expression for the remnant's density profile, the authors computed it numerically and plotted it as part of Figure 12: 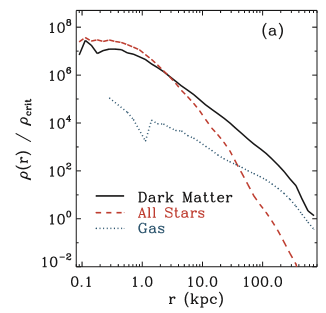 Their simulations indicated that the Sun will likely end up $\sim$30 kiloparsecs from the center of the galaxy (compare this to our current distance of 8 kpc from the center of the Milky Way!), so let's try to grab numbers from the plot at that point. At 30 kpc, the stellar mass density is $\rho/\rho_{\text{crit}}\approx5000$, generously, with $\rho_{\text{crit}}=10^{-29}\text{ g cm}^{-3}$. If we assume that the average mass of a star is roughly $\bar{M}=0.5M_{\odot}$ (seems right to within a factor of two), then the stellar number density is $n=\rho/\bar{M}$ and the average distance to the nearest star is $$l\approx n^{-1/3}=(\rho/\bar{M})^{-1/3}\approx29\text{ light-years}$$ At the moment, of course, the nearest star to the Sun is just over 4 light-years away. Obviously, the situation will be different for each star; like all galaxies, the remnant varies in density - near the center, it looks like the mean inter-star distance is about 1 light-year. Plus, each merger will be different, although I think this scenario is fairly representative of two moderately-sized spiral galaxies. All that said, I would not be surprised if, for many stars in any merger, the night sky contains fewer stars and more blackness.

Now, at night on Earth, the Milky Way appears as a dark band in the sky. That's because the galaxy is - halo aside - essentially disk-shaped, and we lie in the disk. For an elliptical galaxy, it's a bit more complicated. There's no disk to speak of, so the stars and dust lanes would be spread more uniformly over the sky.

The Planetary Society has an excellent post on this, with a series of eight artist's impressions of how the sky might look before, during and after the collision. It looks like they match fairly well with our intuition. Enjoy! 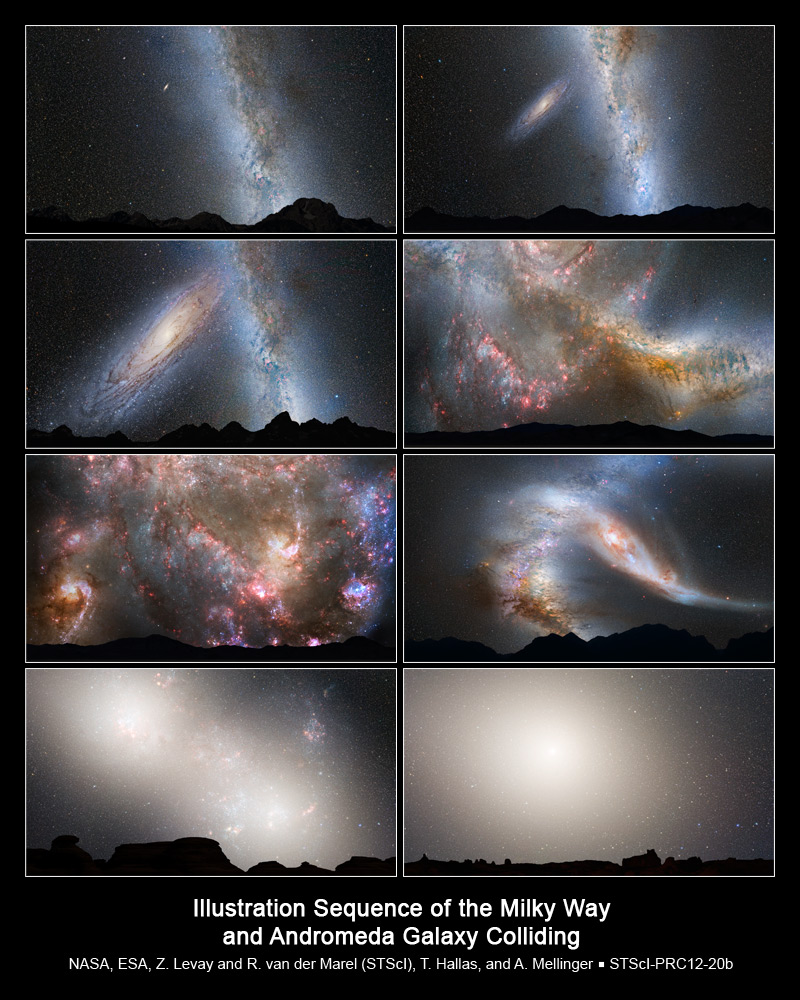 8
What stellar number density would two galaxies have to have for another star to collide with the Sun during a galactic merger?
5
How would our sky look like 100 million years in the future?
8
"Night" sky between galaxies
5
What would the night sky look like from Luna (Earth's moon)?
19
Can my spaceship figure out its position using Cepheid Variables?
8
Which type of star would be best used for a Shkadov thruster to reach Andromeda as soon as possible?
5
How could a galaxy be altered to house hundreds of thousands times more Stars?
2
How many Ultra massive black holes should be added to a map of known black holes?
6
How would a K3 civilization collect the majority of the universes available mass in the form of Intracluster gas?