To put it simply. How would the color an eye affect what one could see?

I ask this due to watching some of an anime called, "Somali and the Forest Spirit" If I remember correctly in episode 2 the main characters come across two members of an Oni clan. Now, these two Oni visually had eyes similar to humans, but their sclera was not black, but white.

That is when I began to wonder how would changing the colors of different parts of the eye affect what one sees, assuming this change isn't merely cosmetic, but in one's DNA, similar to how nocturnal animals' eyes reflect light at night.

Please let me know if you need further explanation by commenting. This is the first question that I have asked. Thank you! :)

Size: bigger eyes mean more light can go in, which is why it's common for nocturnal animals to have larger eyes, along with other mechanisms to maximize the amount of light hitting the retina, like the tapetum lucidum, which gives the appearance that they're glowing when light is directed at them.

Shape: I assume you mean the pupils, unless you mean to talk about the owl's eye "tubes". Here's an image that sums up well: 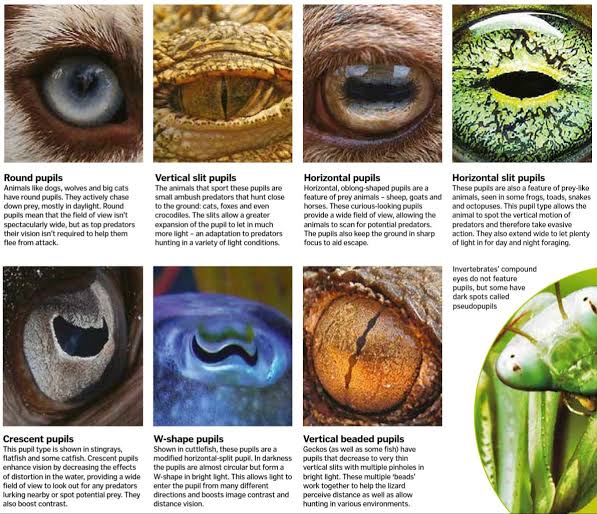 Color: the color of your iris doesn't really change how you see, but it might change how others see you. Colors tend to have psychological effects, so you could say red eyes have a chance of inspiring anger while baby blue might inspire calmness (which is one of the reasons why many monsters are drawn with red eyes). The presence of a large black iris can also be an advantage if you don't want others to know where exactly are you looking at, but can be detrimental in social species, in which the eyes orientation are important to signal certain messages.

Commenting on the black (?) sclera (ours is white so I assume you inverted by accident) , I have little to say. I've failed to find animals or humans with similar conditions, but the closest I found was a condition whee the pupil simply covers a large portion of the eye, making it look black. The black sclera might be so due to special pigmentation in this part of their eyes, and I doubt it'd actually change their vision, as the sclera's main purpose os keeping the shape of the eye.

There is some evidence that brown eyes are better at tolerating bright sunlight and blue eyes give better night adaptation, but it's not on the level of superpowers.

The fact that nature hasn't evolved specific different colour schemas suggests there may not be much advantage compared to things like the camouflage effect of having eyes matching your fur colour.

Not the answer you're looking for? Browse other questions tagged magic fantasy-races worldbuilding-process races .

3
Is it possible for a half alien and half human (Hybrid) eyes to change color accordingly to moods?
7
Advantages of different thumb orientations?
8
Would color changing eyes affect vision?
14
How would a region with no government affect the people, local villages and farms in a medieval setting?
5
Is the existence of vertically shaped pupils, with a hawk eyesight, biologically possible?
5
How would superhealing affect muscle mass?