What super-dense solid could be produced in large quantities using only Earth's atmosphere?

Assuming the power and tech existed to do so (addressing the requisite heat, pressure, etc), would it be possible to draw in atmosphere, condense and heat/cool the particles, and then produce a highly-dense solid in large quantities?

For example, could my imaginary (and admittedly SciFi heavy) machine be the size of a backpack and draws in surrounding air, filters out whatever elements are needed, and then cool/collapse the particles until they form the desired solid, creating ammunition? The backpack creates a specific caliber round -- say 9mm/120gr in size -- and feeds it into a gun to fire via some delivery mechanism -- likely coilgun in nature. The backpack doesn't store the ammo.

If this is theoretically possible, what super-dense solid could be produced in large quantities using only Earth's atmosphere?

Note: I've read through multiple questions relating to compressing air to form a solid and wanted to dive in deeper into the options -- ie not just O2, but nitrogen, CO2, etc. 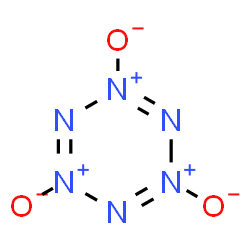 This stuff is made of oxygen and nitrogen which are the main components of air. ChemSpider says the density is 3.1 g/cc; more dense than aluminum at about 2.5 but less that half that of iron at about 7.5 and much less than lead at about 11. But it is made of air, fair and square. I bet it is conductive too. Aluminum or graphite bullets would be fine for a railgun - remember energy increases linearly with increasing mass but as the square of velocity. Faster packs more punch than more massive.

The other thing about making molecules like this where the N is connected by anything other than a triple bond is that they pack a tremendous amount of energy. Your hexazine bullet will explode violently with any excuse; violently like rocket fuel violently.

On reading up for this question, I encountered cubic gauche solid nitrogen; the N is in the shape of a cube and once formed it is metastable, like a diamond. A diamond ready to explode like a bomb; wikipedia called it "the highest energy non-nuclear material". Yay! I am sure I will find something that is good for here on WB stack.

But it is not as dense as hexazine trioxide, itself pretty exotic stuff.

The only elemental component of air that is a solid at anything resembling standard temperatures and pressures is carbon. You could add in some hydrogen, nitrogen, and oxygen in with the carbon to make various hydrocarbons, but those will all be less dense than what you can do with carbon by itself.

So if your backpack can somehow strip enough carbon atoms out of enough CO2, it could compress them into graphite pellets to use as ammunition. However, getting enough carbon won't exactly be a trivial task.

120 grains is 7.78 g. Carbon's atomic mass is ~12 g/mol, so we need .648 moles of carbon. CO2 is about 0.041% of the atmosphere by volume. Assuming that the atmosphere is following the ideal gas law, volume fraction equals molar fraction, so you'd need to filter through about 1580 moles of atmosphere to get the .648 moles of carbon that we need. At 1 atm and 25ºC, 1 mole of gas will occupy ~24.5 liters. So you need to process at least 38,750 liters of air to extract 120 grains of carbon. By comparison, a single high-volume PC case fan is going to move maybe 2000 L/min. You'd need something like a high-powered ceiling fan to move enough air to generate more than one round every few minutes.

And after all of that, graphite only has a density of a bit over 2 g/cm^3, which is about 1/5th that of lead. If your backpack had some way of compressing all of that carbon into diamond, that would get the density up to maybe 3.5 g/cm^3, which still isn't great for a projectile even with its hardness.

A better source of free ammo would be something that can process dirt, which will provide much higher quantities of much heavier elements to work with. At that point, the main complication is just dealing with the wide range of possible dirt/soil compositions.

Air is made out of nitrogen, oxygen, carbon dioxide, water and some other traces gases.

If you limit yourself to clean air and you are using just chemistry, you can't do much more than the same gases, some hydrocarbon and/or carbohydrates. That's what plants do, basically. They get CO2 and water, and turn it into cellulose and oxygen. With hydrocarbons you can make some plastics.

To create other materials you would need to have a way of transmuting those atoms into others. But those processes happens in the core of large stars, not in a backpack, unless you are throwing in a lot of magic.

If you step out of clean air and go to use dusty air, god knows what you can get from it. However, filtering out the needed mass of lead to make a single bullet will take quite some time, unless somebody is grinding bullets right above your head.

It depends on how dense of a solid you are looking for.

You could first cool the air to around 20 K to freeze it. However, this solid won't be very dense. For comparison, solid nitrogen has a density of around $1000 \ kg/m^3$, solid oxygen has a density of around $1300 \ kg/m^3$. and even water under extreme pressures ~ Tpa only gets around $3000 \ kg/m^3$. In other words increasing pressure, even to those found in the most advanced laboratories today will not produce densities greater than those found in metals on Earth.

This is because the pressures (and hence forces) required to compress solids are astonishing. Once atoms are locked into place, electrostatic forces + degeneracy of state will prevent them from getting much closer together, even in the absence of thermal effects.

Even most stars are pretty low density, with the exceptions being very small (low volume) stars such as dwarfs and neutron stars.

Even red dwarfs can have densities only a little over twice that of osmium the densest material on Earth.

White dwarfs are order(s) of magnitude greater in density (~$ 10^5 \ kg/m^3$) and as such are "electron degenerate" meaning that further collapse against gravity is supported more by electron degeneracy pressure than by thermal pressure.

Neutron stars are often though of as neutron degenerate, much in analogy to the electron degenerate white dwarfs, however, this is not completely correct as current research suggest that the "hard-core" of the strong nuclear force is the primary agent which prevents neutron stars from becoming black holes.

Thus to create super dense solid air, would require forces and energies well beyond those produced currently on Earth. The futuristic backpack therefore would need to both cool the air and also produce forces in excess of anything found in the most advanced laboratories.

Not the answer you're looking for? Browse other questions tagged science-based science-fiction or ask your own question.

8
Semiliquid atmosphere - Is my premise/conclusions correct; and will it get the result I want?
4
How could Earth's atmosphere become unable to sustain life?
8
Exoplanetary Review: Rock Storms
4
Thermal balance for the surface where the atmosphere absorbs most energy
33
Could we reach the earth's core using today's nuclear arsenal?
3
climate and behaviour of a gaseous ocean
8
The Great Oxidation Event…Artificially Imposed on a Tharn-Like Alternate Earth
6
How can these kinetic weapons be made more plausible?