What are some ideal scouting forms for a shapeshifter?

Imagine a shapeshifter has to investigate a dense urban or forest environment. What forms would they prefer?

Something that could move fast, climb obstacles, and get into restricted areas?

I’m not worried about them being seen, so they don’t have to be a common animal.

Additionally, birds are probably out because they function poorly in enclosed environments. I’m thinking like a squirrel, a cat, a weasel, or something similar.

What are their options for the most mobile members of the animal kingdom with that sweet spot between speed, endurance, climbing, and etc?

It is a bird. The most dangerous bird on earth. 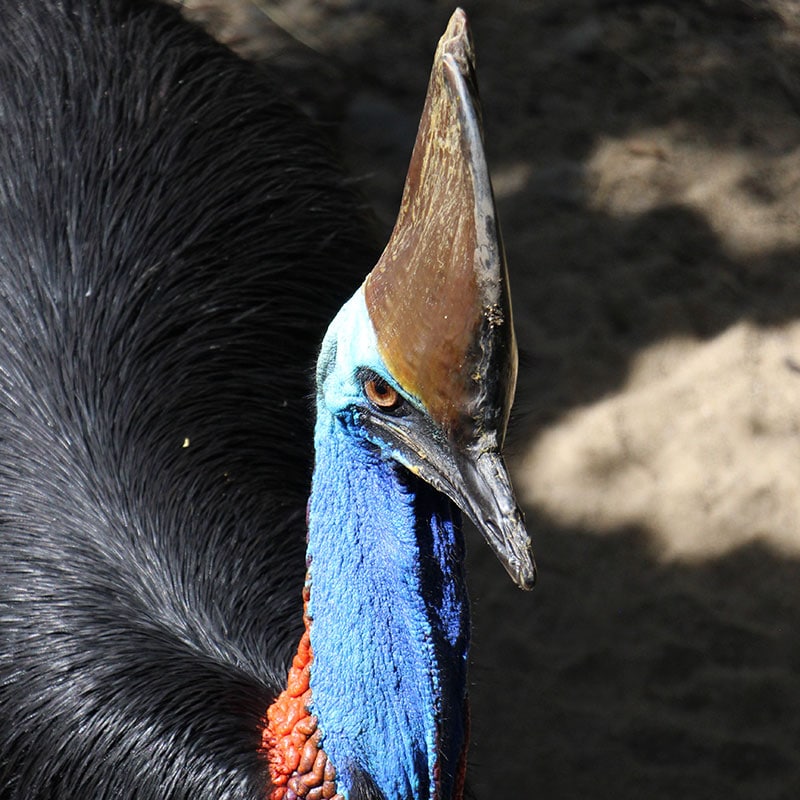 Your shapeshifter is a cassowary. These flightless birds are residents of the deep forest and have no trouble with heavy brush. They are large and truly formidable. Cassowaries are called the most dangerous bird on earth because of their reputation as killers of humans. I cannot think of anything other than a crocodile that would take on a cassowary in their native territories. Or really anywhere else.

Assuming your shapeshifter is a human, the world as perceived by a cassowary would make sense. They are as big as humans. They are visual creatures, with vision that is better than human vision for color and low light.

Plus they look cool and have not been done to death. If your readers will not know what a cassowary is, you could get many of the same benefits with a wild turkey.

This is somewhat overthinking the problem. Rather than find some sort of exotic animal form, you want to blend into the environment you are examining.

Consider the ninja. We have been conditioned by decades of cheesy martial arts movies to believe a ninja looks like this: 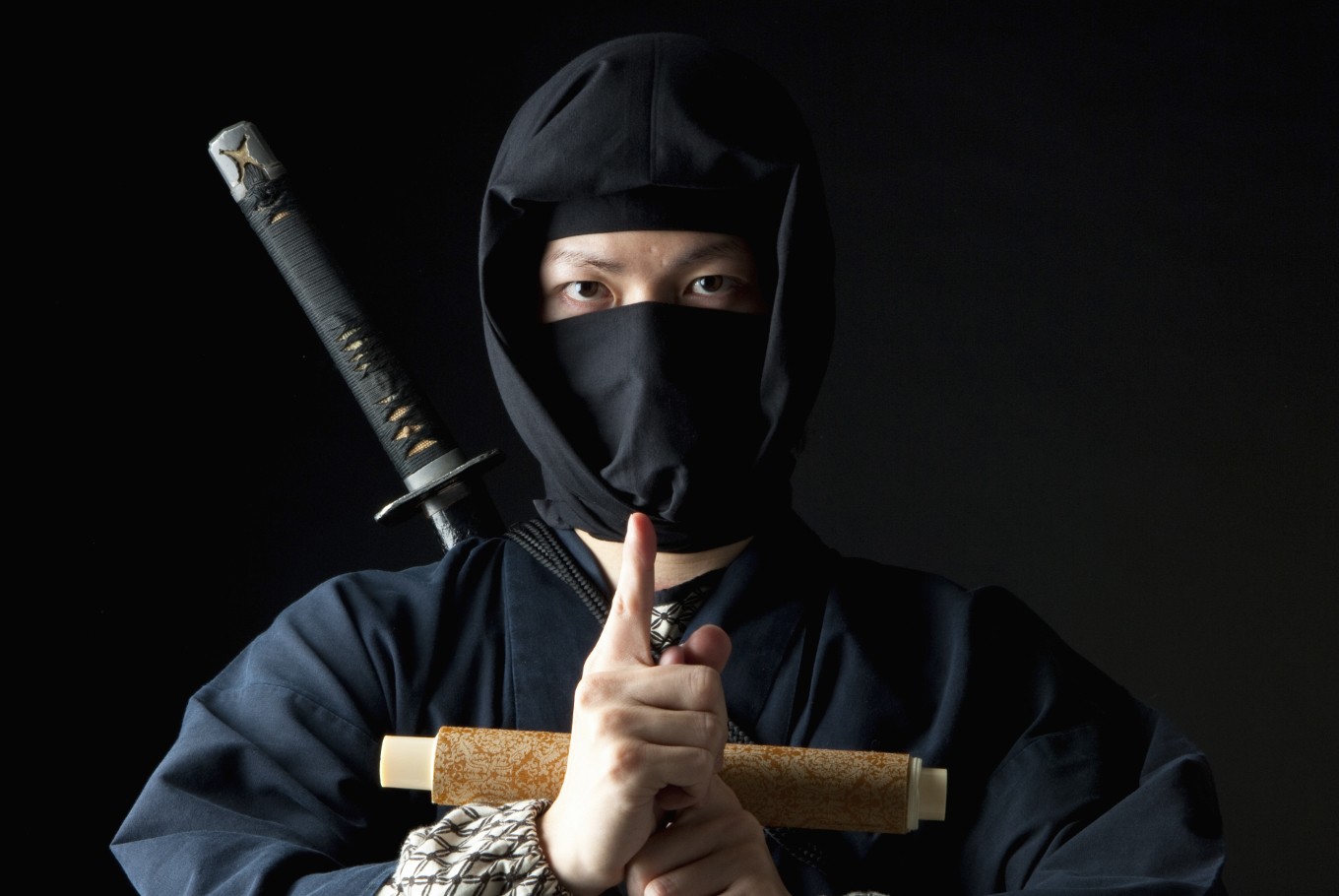 Of course, a person dressed as an Edo era stage hand carrying swords or other weaponry would stand out immediately, both in feudal Japan or in a modern environment. On the other hand, in a modern urban environment, no one would think twice about seeing this guy in their location: 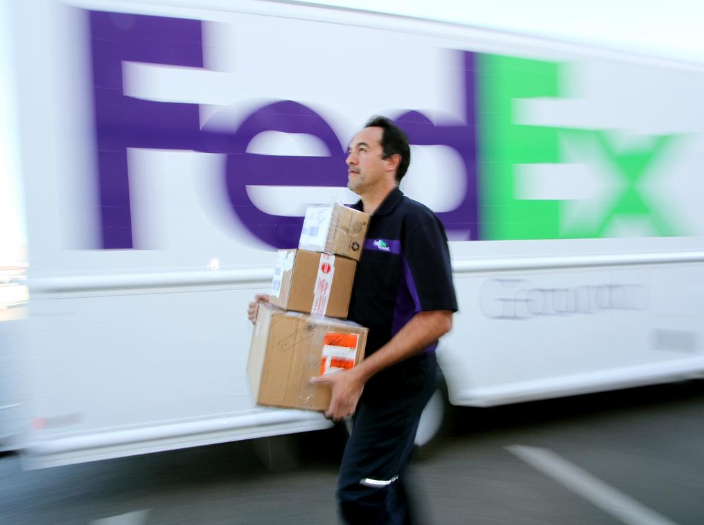 In fact, you might even hold the door open for them. Ninja's in Feudal Japan were consummate actors able to mimic the social and other behaviours of people they were imitating, so they would not get tripped up by behaving like a farmer when they were acting as a merchant. Modern day operators do many of the same things, even on the internet - the idea of having attractive fake on line profiles to lure unsuspecting people or using known emails to "phish" are fairly well known by this time. 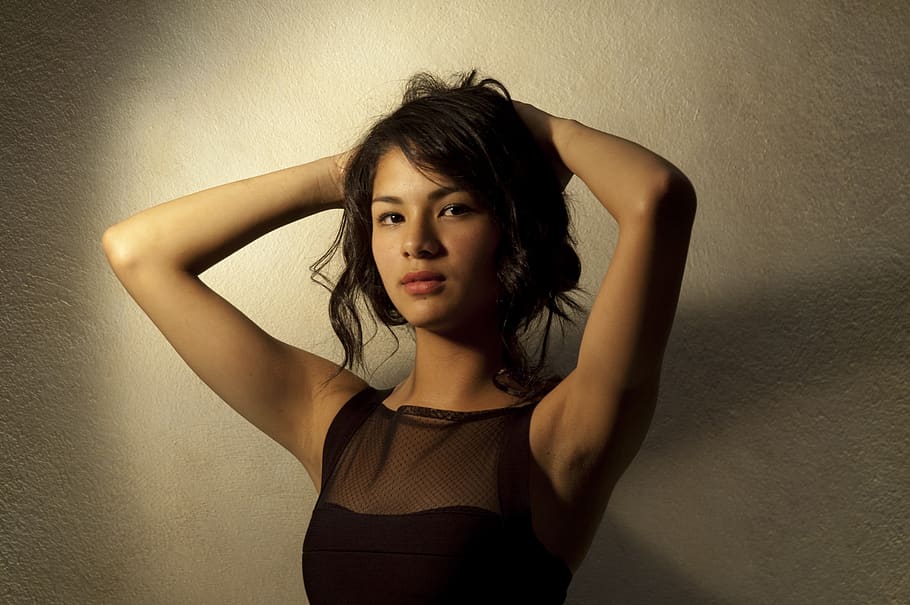 Boris likes long walks on the beach and compromising information about you. Text at this number...

And don't forget that human beings are also quite adept at movement through dense forests and jungles. Tribesmen since time immemorial have grown up there, and explorers, adventurers and soldiers can learn to operate in these sorts of environments as well (you don't even need to be SAS or other Special Operations Forces, regular British Infantry were trained to operate in the jungles of Malaysia, the forests of Kenya or even the "urban jungles" of Belfast). 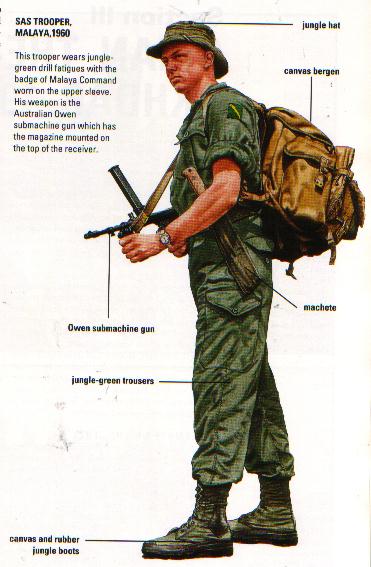 Perhaps the only advantage a shape shifter would have is the ability to change their body image. They can come into an area as an overweight delivery man, and after exfiltrating, change their appearance so they no longer have the same hight, weight, facial features or movement (becoming taller or shorter as needed). 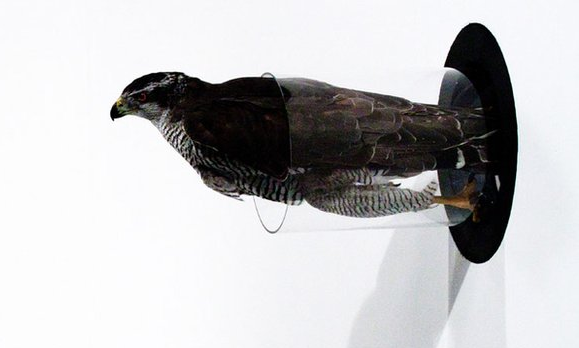 Goshawks are pretty darn good at flying through small gaps. They are designed to fly around in dense forests. Smaller birds like sparrowhawks are presumably better. The larger bird has more endurance though.

Bonus Points: Birds of prey are known for good eyesight which is always a plus when scouting.

A Secretary bird or a Harpy eagle.

The secretary bird sounds like an ideal form. Even though they are birds, they spend most of their time walking on land, despite being good fliers (so they can climb no problem) are 4 feet (1,2 meters) tall (not too tall meaning they can likely go into spaces a toddler can) and have a kick worth around 5 times their weight. They're also known as "the devil's horse" . See the following:

"Secretary birds can run so fast that they've earned the nickname “devil's horse.” There is no concrete number on max speed, but they do a lot of walking and they can travel up to 18 miles (30 kilometers) per day!"

So we have a bird with good endurance, supposedly good speed and with little problems regarding climbing (they nest on trees and fly well, so shouldn't be much of a problem). 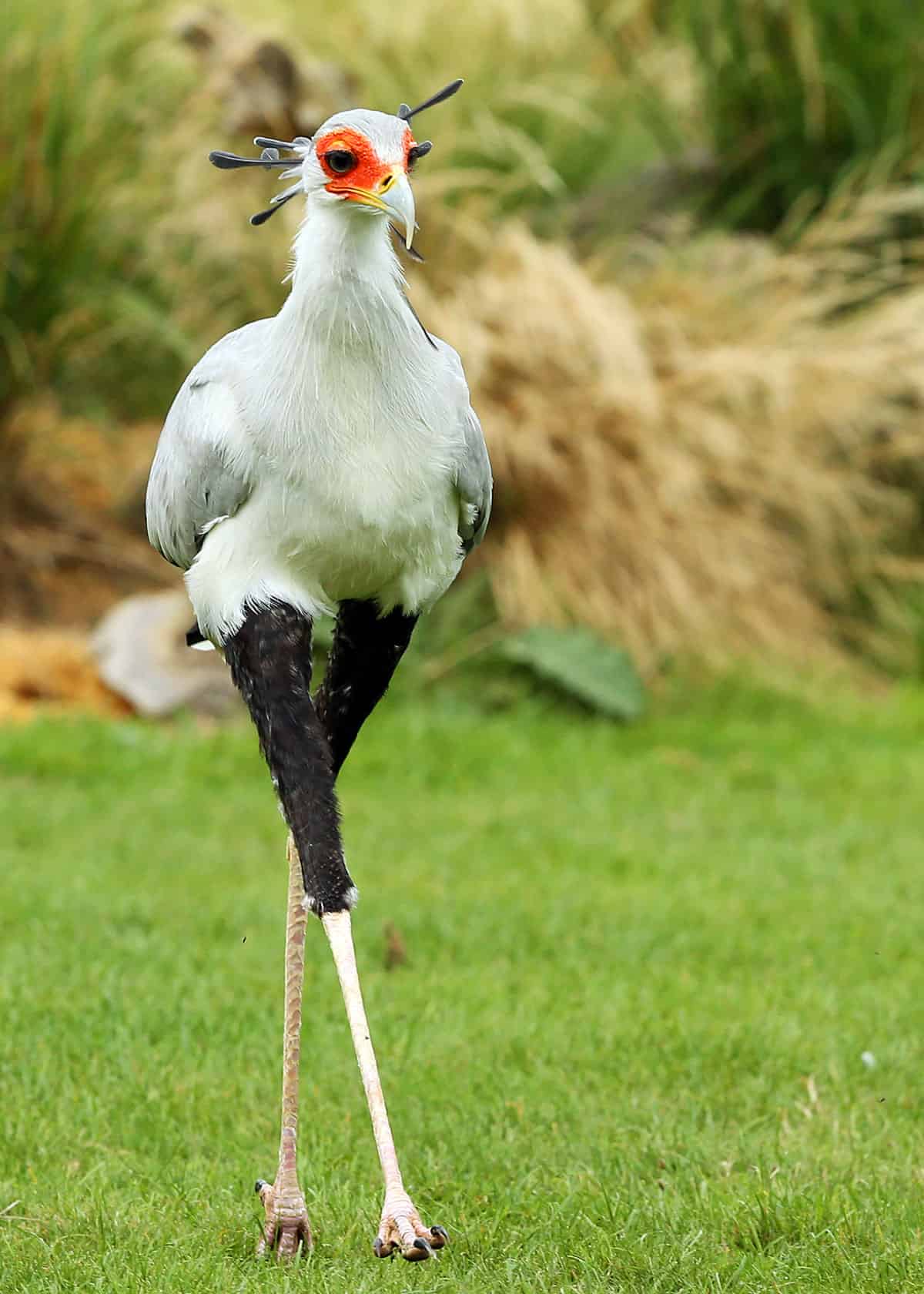 But maybe you might also be interested in a form that has even greater eyesight and hearing, meaning it can track intruders better, while still being able to navigate in closed spaces. If that's what you want, look no further than the harpy eagle. 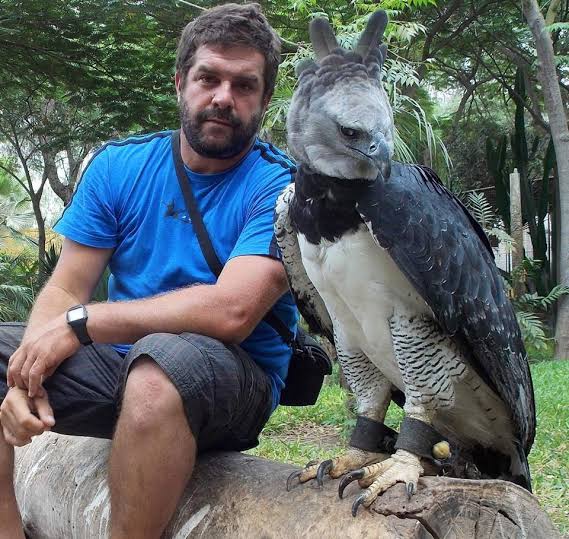 If the picture doesn't tell enough, this bird is not only big, it's strong. Harpy eagles are considered the strongest eagles by many, having talons the size of a grizzly bear's claws, which it uses to hunt and dismember the monkeys it feeds on. In addition, it's native to rainforest biome, with its relatively short wings (1,7 to 2,2 meters from tip to tip) having specialized to fly fast through the dense vegetation. It can reach speeds of up to 50 miles (80 kilometers) per hour.

"Its short, broad wings help the harpy fly almost straight up, too, so it can attack prey from below as well as above. And the harpy eagle can turn its head upside down to get a better look at its potential meal." https://animals.sandiegozoo.org/animals/harpy-eagle

This eagle also posses great eyesight, with better color vision than ours, along with a face disk that grants it good hearing. It's sheer size and strength also make it able to knock down humans with a well placed attack to the head.

"It has excellent vision and can see something less than 2 centimeters (1 inch) in size from almost 200 meters (220 yards) away." http://justfunfacts.com/interesting-facts-about-harpy-eagles/

So we have a powerful raptor with strong claws, wings adapted for flying in relatively confined spaces, good speed and supposedly good endurance, along with the ability to subdue a potential invader without needing to change form.

Flea or similar. Almost by definition what you're interested in is where people are going, and by hitching a ride you can get into the most interesting restricted areas without attracting attention. Fleas have the advantage of being able to get easily on or off a host. 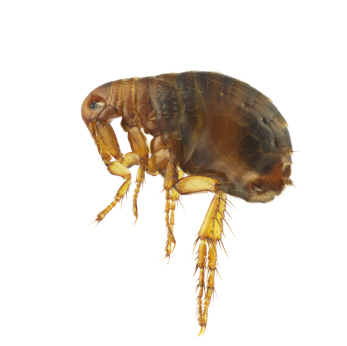 and can also infiltrate the narrowest cracks and explore in detail.

I would say some kind of monkey, as they can get around trees very well and can climb basically anything they can grab. In a forest, they could just swing through the canopy, while in a dense urban setting, they could climb along rooftops or ledges on walls. Also, if your shapeshifters don't have to take the form of a real animal, there's no need to, as they could just make their own form that suits them or the environment, but if they have to pick a real, still-living animal, a monkey would be the best choice.

Not the answer you're looking for? Browse other questions tagged biology magic zoology or ask your own question.