Could an island on Earth with these climate types exist? 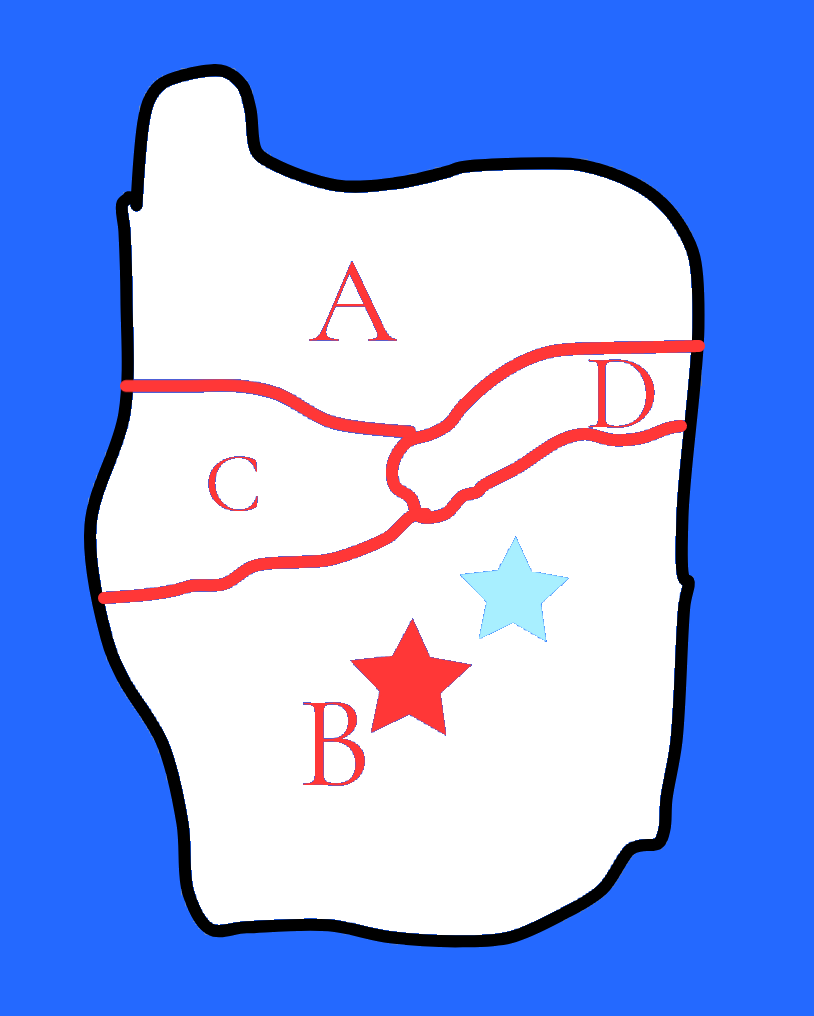 I am creating an RPG and I created a continent in which it is set on. I want to make sure that the climate types in it are realistic as well as the continent.

This island is called Lartess. Lartess measures 150,000 sq km. It is located in the middle of a large ocean like the Pacific or Atlantic. How could Lartess form and how could it have the climate types described below?

Disclaimer: I know very little about climate science with reference to geological formations. All the answers I'll give you are based on my immediate research (i.e. I am googling as I go because I like this question). As a result of that, this will read a lot like a stream of consciousness.

Firstly, I'd like to outline this chunk of land as being divided by 2 tectonic plates - T1 and T2. T1 encompasses all of A, most of C, part of D1, T2 being everything south of that.

Let's start with D1 first: mountains are formed as tectonic plates rub up against each other. It is possible that this part of the island was caused by the collision of 2 different islands. According to this link, the Alps were created by "the subduction of this basin [Tethys Ocean, an ancient ocean between Europe and Africa] and the collision of Africa with the Eurasian plate is what caused the formation of these mountains". If we want to relate to Tibet, as you referenced in your question, that was caused by the Indian subcontinent pushing into the Eurasian plate.

As for D2: D2 has a climate closer to Northern US. I would think this would be a bit like a large valley or basin near D1's mountains, but interestingly enough the Dfb climate type doesn't exist near the US's mountains. It does exist near the Himalayas though. From this link (please don't laugh at it) it states that this climate type is wide-ranging in temperature and is mostly found inland. One way to make this sort of climate 'happen' is if the tectonic plates we mentioned for D1 pushed a) towards the top right of the image, or b) pushed up, and then a little to the right in one order or another. The reason I recommend a) or b) is because of the inland nature of D2 - we can make D2 'sheltered' from its north and eastern regions by a mountain range. Dfb regions experience a wide range of temperatures as well as some degree of humidity. This can be caused by a combination of a monsoon in a 'rainy season', warm air rising up the mountains and settling down the valley, cooling the area down in falls/winters and heating it up at other times.

Region A - we should have started with this: From this link, we can see that the Cfb region is forested and fertile. A nice thing about this region is that it has humid air flowing through it and this air is stopped from continuing further thanks to the mountains of D1. This area (like northern Europe) can also be low-lying. So I'd like to add to the tectonic plate history here by saying not only did T1 and T2 collide, but T1 also 'rose up' a little while pushing against T2. At the same time, sea levels receded. This would mean that although region A is forested now, it was at some point at least a shallow sea or a series of lakes millions of years in the past.

Region C: C is made up of cold hills/plateaus. So this complicates the tectonic plate thing slightly. So although the T2 and T1 definitely did collide, there was a bit of a rotation taking place, with region C acting as a 'pivot' around which T2 collided with T1 in a counter-clockwise manner. This is why region D1 has a mountain range, while C only has cold hills. The lower temperature of C than D2 is caused by cold mountain winds flowing down from D1.

Region B: So this region is very very fertile. In real life, a good chunk of China lives and eats from here, and this is where a large number of Brazil's population lives, as well as Uruguay, Paraguay, and most of Argentina. Cwa climates are noted by warm temperatures. Earlier I mentioned wind currents from the mountains freezing up region C. But where do these winds come from? I'm thinking that the air in this island flows from right to left: ocean winds from the right side of this map go up the mountains, cool down, and flow down the the cold steppes of C. But regions A and B don't have a mountain ranges blocking the path of the ocean, so instead the winds go straight through. But not exactly - thanks to region D2, some of the wind ends up 'settling' and circulating there, causing the sea winds I'm referring to to kind of travel from the right and split into 2 parts - one part providing warm air to region D2 and the rest flowing smoothly through region B. This 'fork' in the windstream carves out the land in region B, creating a large hill or mound, referred to by your Blue Star. This won't be a proper mountain, but kind of like a plateau of sorts. Also (if you like these ideas) this plateau would have to be bigger and located a little more to the north compared to where it is on your map now.

Finally, we have your Red Star freshwater caldera lake (crater lake as you called it earlier). Search up Lake Toba - it's a beautiful place is also an extinct supervolcano comparable to Yellowstone. Maybe this place is like that? Search up other supervolcanoes while you're into it. Supervolcanoes are made when a lot of magma gets piled up between the crust and mantle, and that's mostly what I understand about them. If you don't like the idea of a volcano, maybe you'd prefer asteroid impact, like this one. The link I shared refers to an impact on a coast, so if you want a more inland example, perhaps this lake would interest you.

I realize that my descriptions are a bit vague and hard to follow, so I decided to get on OneNote and do some drawings on your map. 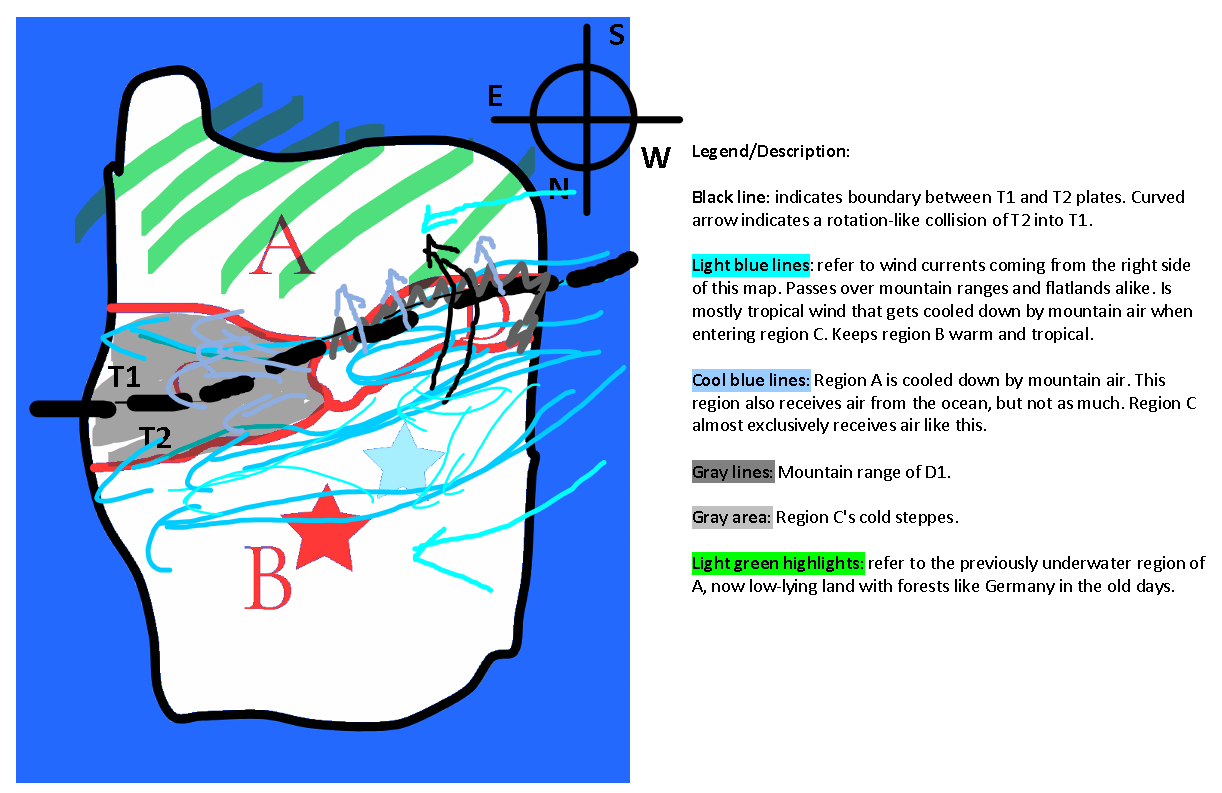 Now a final note about the location of this island. Not too many places fit the region of the world where such conditions are possible, but you were right about picking the big oceans. I personally think that this island's southern half would fit really well in the Pacific Equatorial Current or its nearby countercurrents. More specifically, I would center the Pacific Equatorial Current on your island's lower half, allowing its upper half to not be as windy. So the region I suggest can be seen in yellow below: 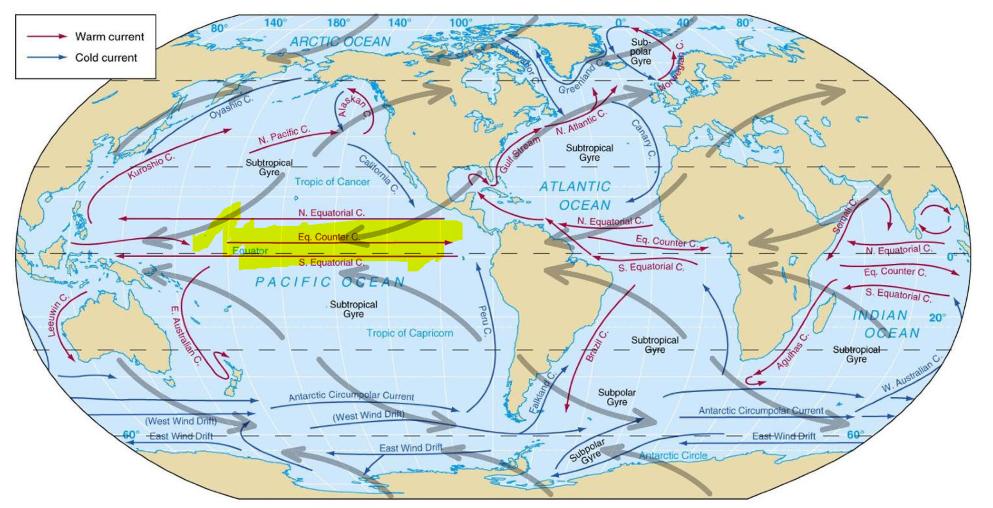 Problem with this is that the Pacific Equatorial Current flows the exact opposite direction of what I described in my answer. There's a simple solution for this - your map is upside down! So, the upper part of your map is actually pointing towards Antarctica, or South Pole, in real life. That's why I have an upside down compass in the drawings I made on your map.

I hope this helps!!!

You can have an island on Earth with these climate types. Here is Hawaii. 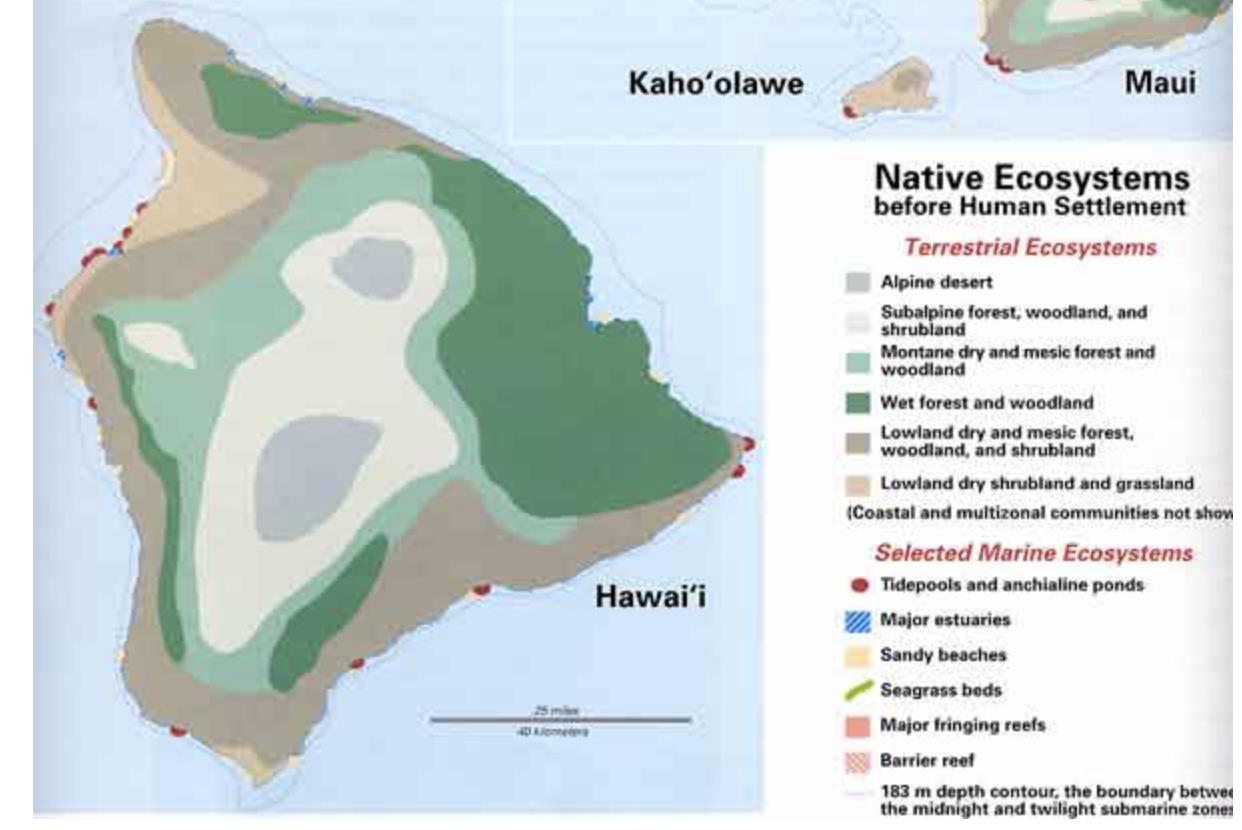 Here is the Big Island of Hawaii, at 10,000 square km a tenth the size of your island. The rain shadow of the mountains and altitude combine to make the ecosystems you want. Moisture laden air comes in on the wet side and drops rain to make the rainforest. On the dry side is grassy savannah. Lowland forest is up the mountain from the rainforest and the high mountain areas are alpine.

You are pretty close with your island. Moisture laden air is coming from below, creating rainforest (B) as it drops rain when it hits the mountains (C and D). Your alpine region is the middle and then you have dry forest / savannah (A) at the top of your island the the rain shadow of your highlands.

Hawaii is a volcanic island. You could do worse than to just scale up Hawaii for your RPG. You could an the actual map of the island. It an active volcano you did not know you wanted until now, and also has all the things you want except for Crater Lake. Which you can make - one extra caldera would not be out of place.

Sector D sounds like the least plausible one as far as I know. For that to happen, the island would need to be located at the borders of at least 3 tectonic plates, with 2 of these converging towards one another and both sliding laterally with a 3rd, relatively straight one (which would contain half of the sectors A and B and roughly the entire sector C). It's not impossible, but not that probable, and it will also mean earthquakes will be very common in your island.

Sector A doesn't seem too bad, if the island is close to the tropics (Brazil during the 1500s had dense forests covering all the way to the beach, so not unlikely).

Sector C is the second main problem, because of the location for sector A to exist. To get the colder climate while still being in the tropics (not invalidating A), the only way to get colder is up. Sector C will have to be decently elevated, likely not as much as sector D, but it will need to have an altitude of at least 3000 meters if you want it to be cold (the "Pico da neblina" is located near the equator, yet can reach temperatures around 0 celsius at its peak, at 2.994 meters).

On sector B I have the least to say, since I know very little of the requirements for a wetland to occur, but my main assumption is that it'd be similar to the swamps of central tropical Africa. It could've formed due to the land being relatively low and having wind currents which concentrate clouds in the region, replenishing the water, but I won't say I'm sure, as I haven't found data to back these assumptions.

Blue star isn't that impossible. Maybe an ancient high elevation which suffered heavy erosion till it became a hill (it's base should also face a fair amount of chemical weathering, being in a swamp).

Red star could be possible if my wind currents carrying rain clouds assumption isn't too crazy. Maybe Have a slight elevation at the borders to keep it isolated from the swamp (easiest solution since it's a crater) or simply have different densities between the swamp water and the lake water and done. A variation of the density solution can be seen in the gulf of Alaska: 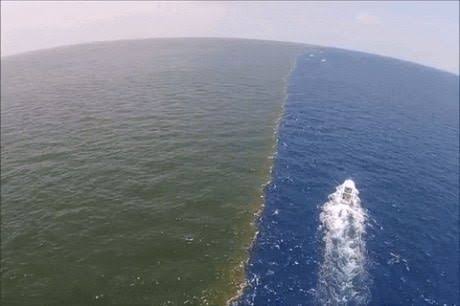 Now on the formation of the island: most likely tectonic activity. Your island could likely have originated by the lifting of the ocean floor, along with potential magma extruding in the process.

To other users: if you're more knowledgeable in the subject (which is very likely) and noticed mistakes in my response, please let me know, so I can also learn on this subject and fix my response.

Not the answer you're looking for? Browse other questions tagged climate geology tectonics or ask your own question.

5
Sunrise and Sunset In a Ternary/Trinary Star System