How can I explain a device that blurs vision within a localized area? 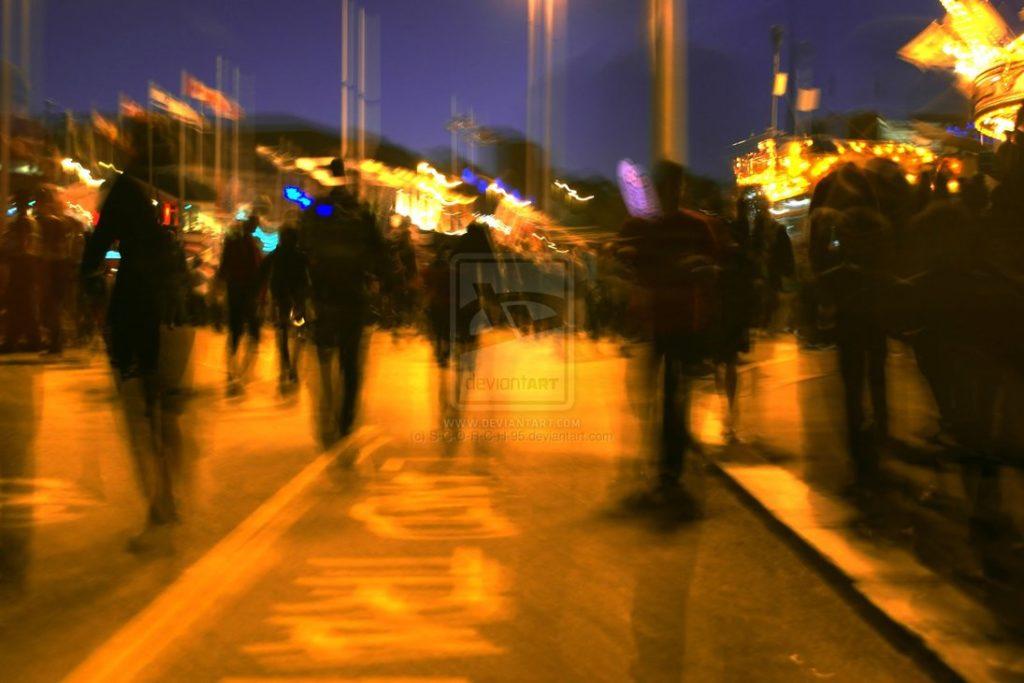 For context a person has stolen a piece of junk military equipment that can allegedly "warp reality". Turns out to be a false rumor, the device actually has a limited ability to alter/warp visual perception within a localized area.

With context out of the way the device would work by scattering tiny particles into the air resulting in a very warped sense of vision. It would affect the human eye and other optical instruments used to record images such as cameras in the same way.

Vision would be blurry/smeared making it very difficult to do things like aim and/or walk properly for everyone (except the user of the device who is shielded from it's effects and can see normally).

It wouldn't completely obstruct vision as people within the area would still be able to distinguish faint shapes and colors, they just wouldn't be able to see properly enough to avoid confusion, nauseousness, dizziness.

My question how can I explain this in a semi-plausible fashion ? (be it in scientific or pseudo-scientific manner, if all else fails I have no problem with just going with magic)

(...) the device would work by scattering tiny particles into the air resulting in a very warped sense of vision. It would affect the human eye and other optical instruments used to record images such as cameras in the same way.

You would be surprised to learn that this device already exists. It has actually existed for quite a while.

It's called a smoke grenade. You just need to find the right smoke for the job.

This is a picture about France's national sport, protesting. The game consists of one team of civilians trying to break stuff on one side and one team of police on the other side trying to disperse the former. Often one team, usually team police will use smoke grenades to make the game harder for the other team. It makes the playing field look like the picture below. Notice how some people in the background are harder to see than some others, and how objects behind the smoke are harder to see than those closer to the camera. 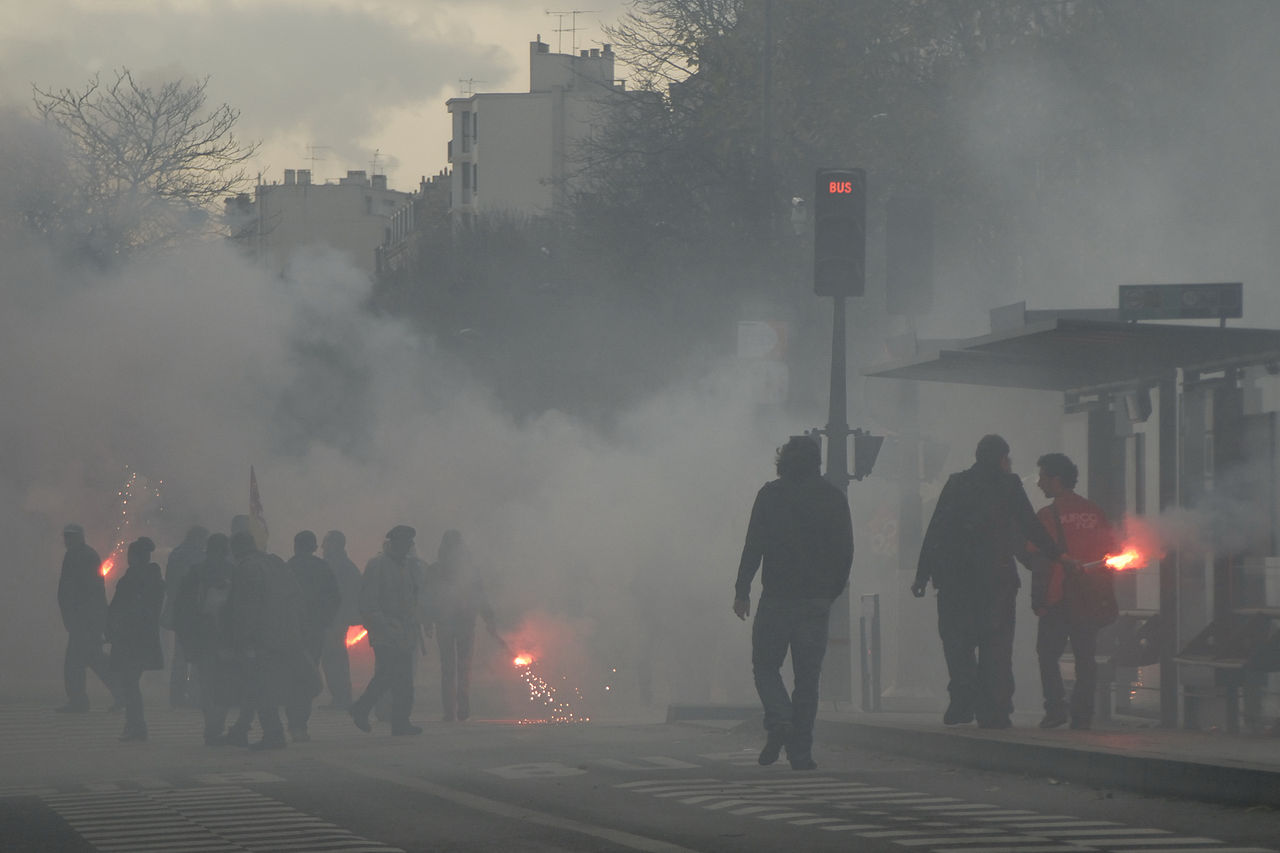 Even completely translucent smoke will do, because as long as its refraction index is different from regular air, you will notice a distortion.

You could also use burning methanol. Its mostly invisible flames will look like very intense heat haze, but will have the advantage of also physically hurting pesky onlookers.

It's an Ultrasound standing-wave generator.

Sound is a longitudinal wave. This means that, as it travels through the air, it will compress and stretch the air - increasing and decreasing its density.

The density of air has an impact on its refractive index - this is how a mirage or "heat-haze" works, like looking through a wobbly lens.

Creating a standing wave means that you will have points which maintain normal air density, and points which have high or low density, creating a mirage. This will effectively cause double-vision, which will even appear on camera: 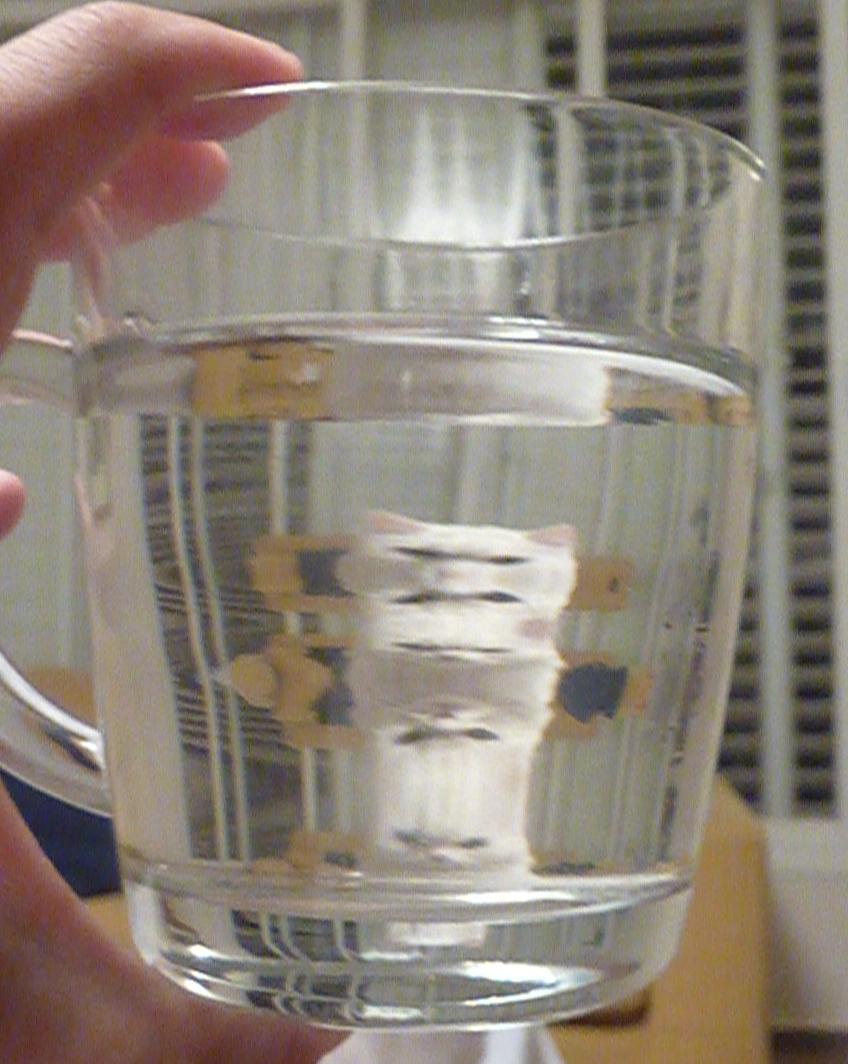 It does warp reality.

Your characters figure out all the thing does is make things blurry. But it is actually a reality warper. It is just badly broken.

On turning on the device, weak channels from multiple nearby parallel dimensions are opened. Only particles traveling at light speed can traverse these channels. The result: an image composed 80% of light from our dimension (some leaks out) and 20% of light from other dimensions.

Most of the adjacent dimensions are parallel universes almost exactly like ours with slight differences. The result: superimposed images of most things, which we see as blurry. If there should happen to be something in our own dimension which was uniquely here or quite different in other dimensions, it would be dimmer but less blurry. Such objects in other dimensions appear as vague ghosts. Certain bright objects, like a fire, would be seen more fully.

When the machine is working well, channels are more fully open. You can spy on the blurry majesty of all the adjacent dimensions while your own is dark and barely seen. Which makes it hard to get around, but very nice if a nuclear weapon goes off in your vicinity. You will know it is coming because the flash from explosions in the other dimensions will happen slightly before and after the one in your own.

The most similar purely physical effect is heat haze, the effect of a blurred picture behind a source of heat. 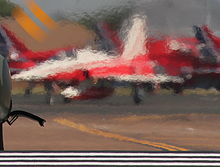 So, your device could just set the surroundings on fire. Same effect. However, people might find it difficult to appreciate the visually reality-warping effect when they are burning up.

For a less damaging solution, the device could instead expel a gas that has a different refractive index from regular air. It should be inert (so you don't get any violent reactions with any object in the vicinity), and it also should not be vastly more or less dense than regular air, or it would just sink to the ground or float to space.

Honestly, I am not versed enough in the physics to just point you to a gas and a temperature. If you're fine with pseudo-science, then you can say: "the device violently expels a warm gas which strategically-placed fans stir about the room".

The person shielded from it could be wearing goggles which record a different kind of light; one which passes through air without doing any refraction to begin with. Radio waves, with a wavelength between ~5 cm and ~10 m, do that. Though a "radio wave camera" is still pretty experimental (and might not work on a goggle scale), if pseudo-science is allowed, this would be your solution.

Your device seems to have many similarities with a sonic weapon made by the Chinese.

"“vertigo, imbalance, intolerable sensations, incapacitation, disorientation, nausea, vomiting, and bowel spasm; and resonances in inner organs, such as the heart.""

These are the possible effects of said weapon, with the eyes also being possibly affected, should the frequency be at around 18hz (eye resonating frequency), causing the victims to "see ghosts" and other effects, due to their eye changing shape slightly and triggering their cones and rods by pressure.

This seem to be the closest thing I know that resembles your machine, with the blurry vision probably being just a side effect of the natural dizziness and vertigo caused by the weapon. If you're willing to assume that then congrats! Your machine is not only completely scientifically plausible, it's a variation of technology existent in our own world.

Regarding interference with electronics though, that becomes difficult, unless it emits some sort of electromagnetic field that disrupts electronic devices or uses other times of frequencies like another answer suggested, I'm not sure you could.

Though on a side note: Not that a camera would make much difference when you're in no conditions to use it, and it would look like everyone within the sonic attack is going crazy for anyone watching a recording, making your device harder to figure out for those merely watching a footage.

I wrote about a thermal laser weapon which did this for New Scientist magazine - article is called "Blinded by the heat: The laser weapon you'll never see"

It works by selectively heating part of the eye to cause temporary and non-dangerous (they reckon) blurring.

Obviously this targets individuals rather than an areas, so you'd need a turret with multiple weapons (disguised as CCTV?) to zap everyone in a given zone.

If you don't mind a little scientific hand-waving — 👋 — I'd suggest a device that emits particles that interfere with photons. This would create less a classic blur and more of a diffraction pattern, like concentric circular rainbows or grid patterns, but it would get the job of obscuring details done. Connect that to a visor that cancels out or compensates for the effect (a critical polarization angle, maybe?), and the person wearing the device ought to be able to see well enough.

Focussed ultrasound is proposed as a way to treat migraines see here thereby having an effect on the region of the brain responsible for these effects. So a wide-band sonic tool of the right frequency could produce the visual distortion of an migraine in a crowd of people
A user could have a "noise-cancelling" tool that blocks those particular sound levels over a much smaller area, giving an oasis of clarity.

Sonic / noise devices are very prevalent already in our society, so the military could have disguised the device as a cellphone, and put the noise-cancelling tech into what looks like blue-tooth headphones. Good luck to the authorities in spotting the user in a crowd!

Not the answer you're looking for? Browse other questions tagged internal-consistency magic science-fiction .

9
How do I explain that crystals/gems and precious metals are magical
16
How to realistically explain a creature that eats dreams and nightmares?
4
How does a sighted species explain that they can see
0
How would a device that can send text messages into the past function?
6
How can I explain rainforests in a world with little, localized rain?
5
Can a Robotic Eyeball Be Created that Perfectly Replicates Human Vision?
0
Implanted device in human body that can transmit over long distance