What might be the climate inside a "sky abyss" on a tidally locked planet? 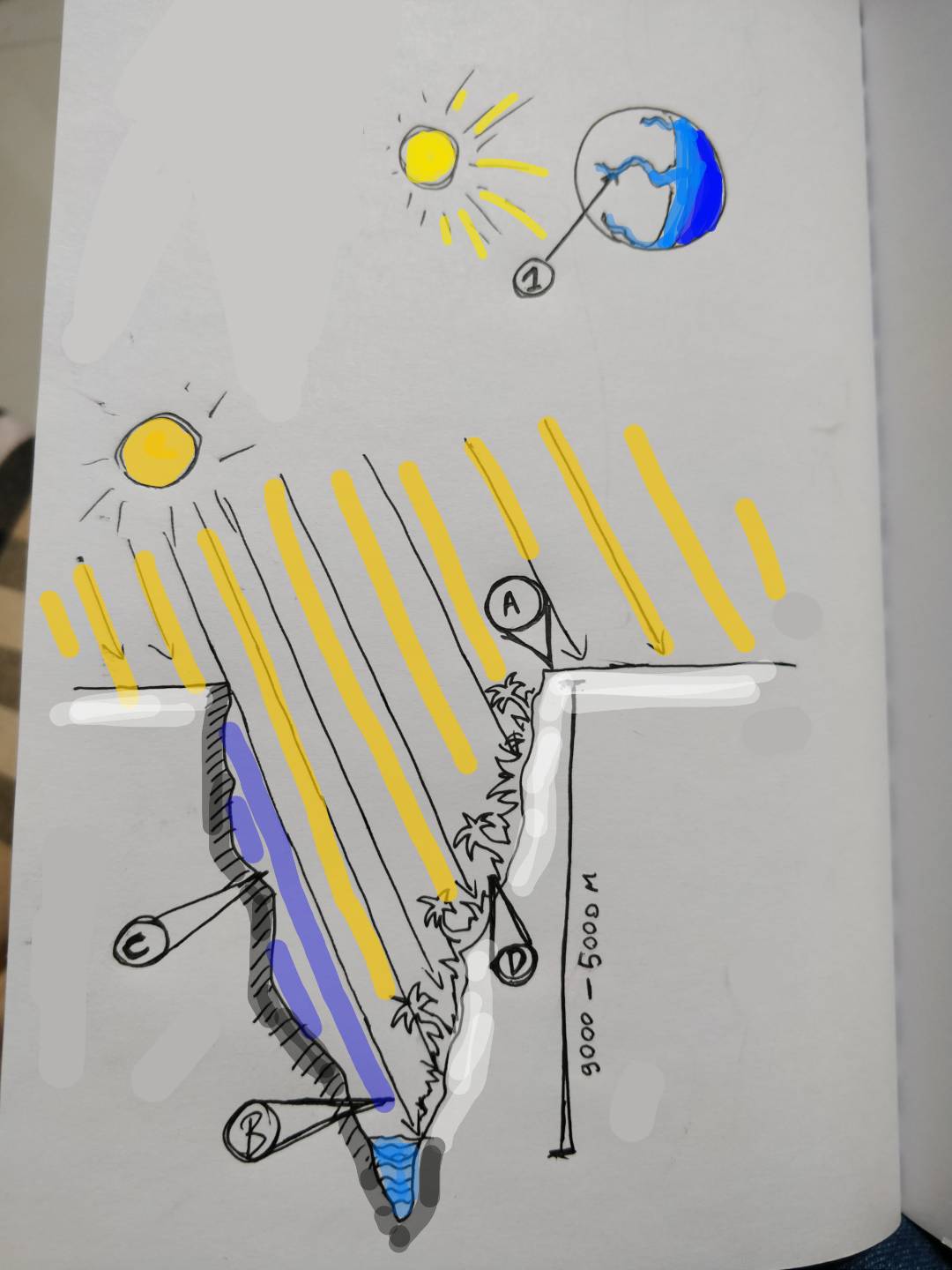 Ok, assuming a planet that's tidally locked to its sun, but is otherwise roughly similar to earth in gravity and atmosphere. Classic tidally locked planet: one side is covered in ice, the other is a scorched desert. And there's water flowing from the glaciers of the dark hemisphere, towards the zenith pole.

I assume that, because of the intensity of evaporation, on the light hemisphere the "sea" level is much lower than on earth, and there exists very deep sky abysses that are the equivalent of our earth's oceans or even deep sea trenches in depth, but mostly filled with air (as opposed to water on our Earth). (see 1, in the drawing) I guess that at the bottom of these abysses we will find the glacier water flow previously mentioned.

My question is: How might the conditions down these abysses be? Assuming an abyss that's comparable in size to one of Earth's deep sea trench (between five to nine kilometers deep and a few kilometers wide) More specifically: 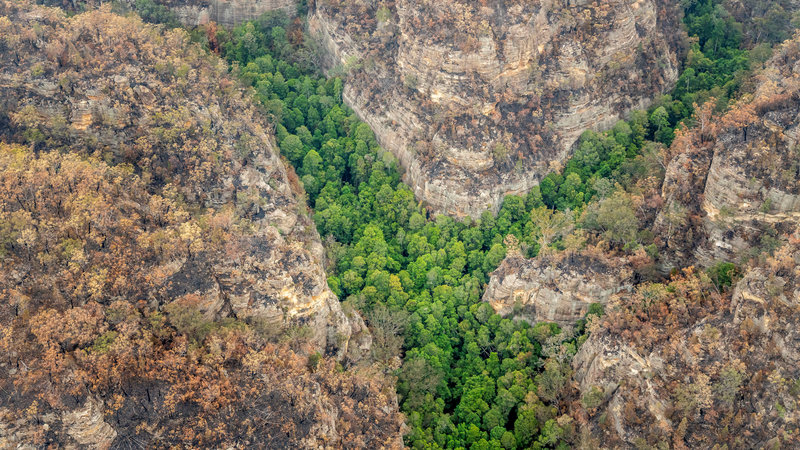 I envision your sky abysses to be like the canyon where the Wollemi Pines were discovered - a wet dark refuge in a hot, dry landscape. Do read the whole article if you are into this!

The helicopter was now a tiny speck between the 400metre-high walls of a gorge filled, right to the base of both walls and off in a ribbon towards the horizon, with an almost unbroken carpet of rainforest canopy. David Crust, a senior NPWS ranger, pointed to the spear-like crown of the biggest Wollemi pine on earth, nicknamed "King Billy" and known to science as "tree one". Scientists estimate that King Billy first began poking its head above the canopy about the time of the Norman conquest in 1066. Images of King Billy travelled around the world when the discovery of the Wollemi pines was announced in the Herald in December, 1994…

Crust and a Royal Botanic Gardens horticulturalist, Graeme Errington, immediately began draping ropes into the canyon for two abseils that would take us through the rainforest's canopy and into a fairyland of ferns, fungi and a gloomy impenetrable darkness. The scientists who prepared the draft Wollemi Pine Species Recovery Plan estimate that the amount of light reaching the base of the cliffs where the Wollemi pines live is less than 10 per cent of that above the canopy levels. Some areas receive less than one hour of direct light per day.

As regards weather, I was thinking about air movements on a tidally locked world. Air from the hot side would rise and expand, including expanding over to the cold side. Air from the cold side would be smashed underneath that hot air and roll out, hugging the ground. There would be a strip between the two sides where it was bright but wet and that strip would be loaded with life.

The cold air entering the bright side would hug the ground and so track along the clefts in the earth that your world has. It would be dark down there but a gradated darkness. At the very bottom would be only the most dark tolerant plants - ferns, algae but also loads of decomposers feeding on materials from above - mushroom forests. Plants needing more light might send long roots down into the dark to get the water there.

Cracks in the earth can open because of gradual desiccation of the land below.
This is an earth fissure in Arizona. 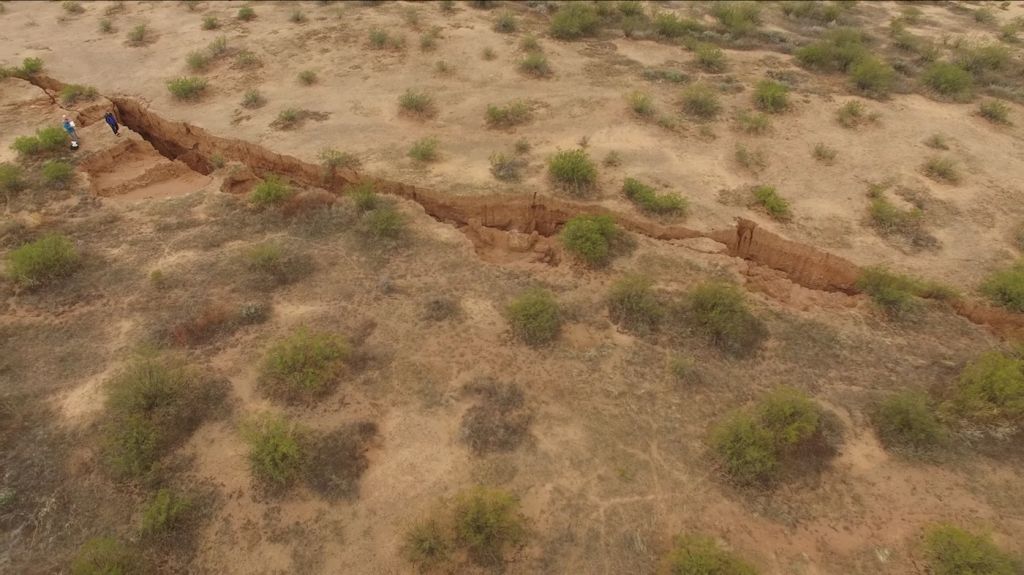 Once something like that opened, cold moisture laden air would enter it and the moisture would keep it open and gradually widen it, carrying away debris that falls to the bottom. A problem is that the narrowest steepest canyons also have hard substrates resisting mass action and crumbling, and those substrates are harder for plants. But a canyon like the Wollemi one is steep enough and clearly it is fine for life in the shady bottom.

On thinking about your world I was wondering about a world which was not quite tidally locked. Rotation is very slow - a day lasts an Earth year but it is still slowly turning. The day side gradually encroaches on the glaciers, turning the green strip into savannah and then desert. The night side and its glaciers gradually darken their side, claiming the life under the wall of ice.

Not the answer you're looking for? Browse other questions tagged science-based biology climate tidally-locked .

4
Could life exist on a tidally locked planet?
5
Flora in permanent twilight/night