I'm planning a Dungeons and Dragons 5E campaign for my friends where they're going to take on the role of divers who use magic to explore the ocean's depths in search of sunken treasure and they need a ship to take them from one dive site to another. While I could easily use a generic 'sailing ship', I thought this might be a fun educational opportunity for both me and my players.

You see, the campaign is going to take place in a fantasy version of renaissance Earth - all the land masses are the same, with the difference being the preponderance of magical monsters and phenomena (both on land and sea). Sailing in this world is much more dangerous due to the probability that some deep sea beastie is going to look up and see something big and decide to see if it's edible. As such, ships should be f a s t.

To be guaranteed to outrun these monsters, they should be able to maintain a speed of 12 knots in most weather conditions. I know modern trimarans are capable of those sorts of speeds, but they also benefit from modern engineering and material technologies. And this ship needs to be big enough for ocean crossing with a crew of about 15-20 people (call it a displacement of about 50 tons, about what a caravel would be capable of). It should be able to remain on station in the middle of the ocean for days at a time. Can a wooden hulled triamaran achieve the desired performance? Or would there be a better alternative?

The use of minor magic is allowed, for instance:

Anachronistic technologies are also allowed as long as they can be manufactured with the approximate technologies available (ie: solid wing-sails, crank driven propellers instead of oars).

You have a bigger monster. 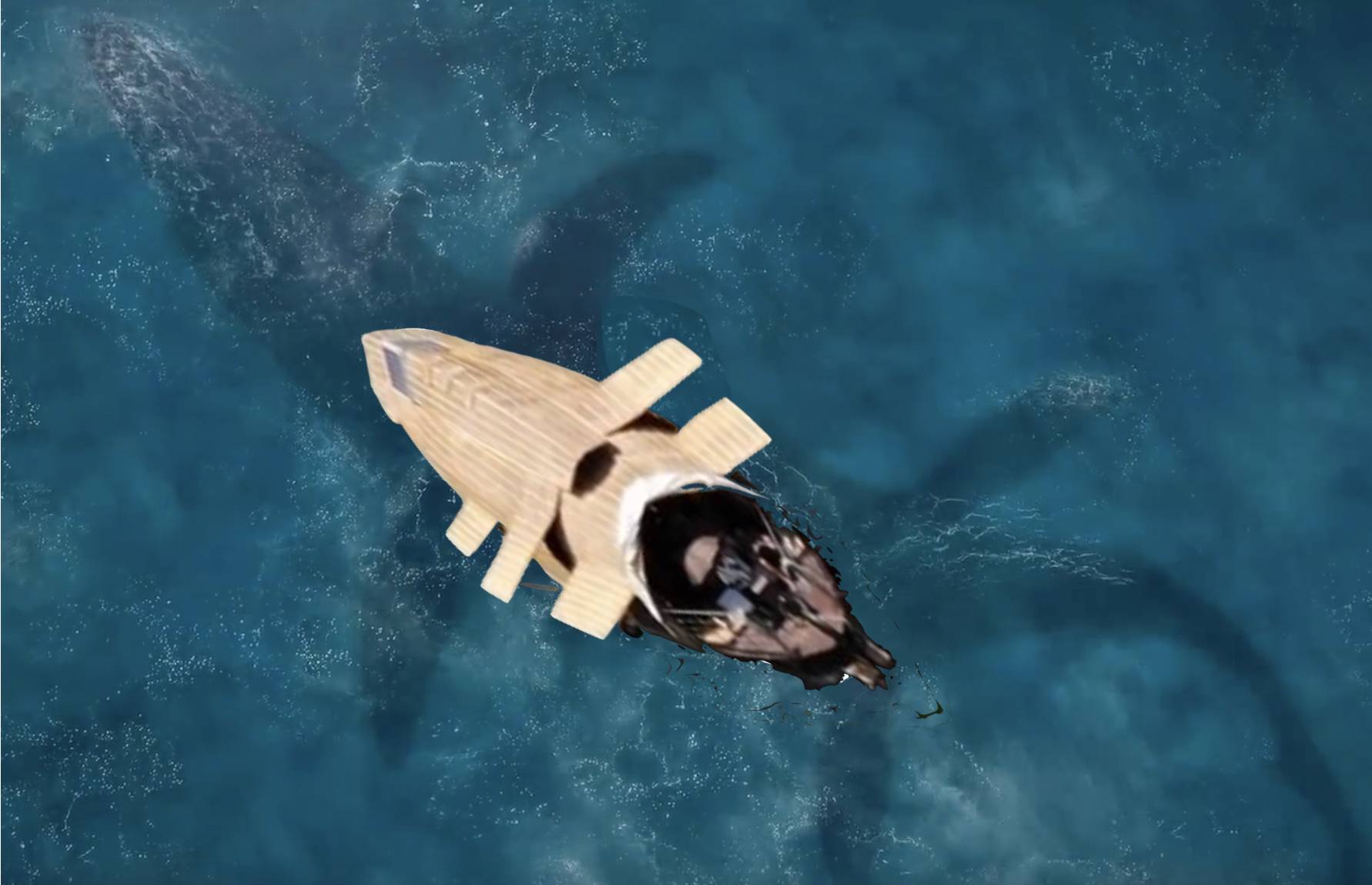 Inspired by this answer: What attributes and how big would a sea creature(s) need to be to tow a ship?

Your players contract with a large sea monster to carry their boat. This NPC monster is ferocious enough that lesser monsters will not want to risk an encounter but smart enough to understand what your players can buy for it: land meat and lots of it. A monster like this might also know where treasure is, but because of its physical limitations be unable to get it. If I were the monster I would bring your players to a small score first to see if they kept their side of the bargain.

The monster can talk, and would communicate with the players thru the hull of the boat. Or in the water, where it is phenomenally loud. They might not initially be aware that it can also hear them very well, on and off the boat.

This set up will sidestep the boring business of trying to actually get where they are going. The monster takes them there. It will also allow fun role playing when players fight beside their chartered monster - something shows up that is ready to take on a monster of this size, and their monster needs help.

Why not try a sailing hydrofoil catamaran or trimaran. Such a ship can easily sail at speeds of twice that of the wind or more, and can easily exceed the OP's required minimum speed of 12 knots, and can in fact easily reach speeds of 35-40 knots, and specially constructed hydrofoil sailing ships have reached speeds in excess of 65 knots.

While most of the vessels mentioned in the Wikipedia link above are small craft intended to be sailed by minimal crew, a 60' trimaran has been recorded with a speed of 50 knots. There is no reason why a larger 50-ton vessel could not be built with hydrofoils, and still achieve a speed on the order of 35-40 knots in 16-20 knot winds.

Additionally, a larger vessel may be large enough to mount a number of ballistae on its decks, conceivably one fore, aft, port and starboard. Each ballista could have a firing arc of 200° or more, allowing up to three to be brought to bear upon a single target. The ballistae could be loaded with a variety of ammunition, from simple huge spear-like bolts, to harpoons that can be tied to the ship, poison-infused bolts for dealing with very large monsters, or incendiary ammunition for combat between ships.

As a DM, I always felt the details of a campaign should be flexible enough to do what was fun and to not obsess too much on detail. As a Worldbuilder, we can get bogged down in realism. While I love fantastical, realism can be more satisfying. Although it's a little outside the period, I'd suggest clipper ships.https://en.wikipedia.org/wiki/Clipper They're still sailing ships, and have the right feel, but they were really fast and had a lot of cargo capacity. Early ones were smaller, but later ones got quite big and were sometimes even made of iron! They were sometimes armed, but not heavily, so the ship wouldn't be a battleship. In the non-starjammer campaigns I've had on ships, these are the qualities I've found best. Add an unnaturally strong wood, spells to drive sails in dead calm, and harpoon firing ballistas designed to fire downward and it makes me want to play it!

Perhaps you could have the underside of your ship plated with bronze and hooked up to some kind of electrical charge, possibly via some variation of a Baghdad battery. In real life, sharks are believed to be repelled by electromagnetic fields, and it's not a huge stretch of imagination to think that fictional sea monsters might be similarly affected.

Other strategies are viable

Being fast enough to outrun sea monsters is only one possible way to avoid trouble. There are other viable strategies, and mariners will have hit upon many of them. They will be highly motivated to adopt the most successful techniques in order to protect themselves. Ships are an expensive investment. Losing one to dire krakens really sucks.

The point is, people in a business like your players' would not be content to rely on one strategy, because the consequences for a single screwup are catastrophic. They'd likely employ a mix of strategies.

Normal divination magic is fairly short range. But these monsters are huge (because you only care about ones large enough to threaten shipping in the first place). So make custom divination magic that has a much longer range, but only detects creatures of Gargantuan size or larger.

Even if the magic only gives a vague sense of the detected creatures (say rough size & shape and speed) a trained arcanar operator can likely tell what kind of monster it is, much of the time, and then a course can be plotted to avoid going near them in the first place.

Major naval powers will find it in their best interests to spend considerable resources managing their monster problems. Coastal waters are relatively easy to keep clear. Colossally huge monsters are unlikely to like being in the shallower water to begin with, and they make nice siege engine targets.

But important shipping lanes are also worth keeping clear-ish. If there's a lot of traffic between, say, from Not-Britain to Not-Greenland, then it will be worth the while to arrange for fleets of ships to patrol the route, and keep it reasonably clear. That can be mercenaries or the Not-British Navy.

No, this won't make the seas safe. It will make them safer. Often, that's enough. And the monster hunters don't even have to kill all the sea monsters; all they have to do is convince them to stay out of the shipping lanes.

Seems pretty self-explanatory. Each type of monster would likely require its own specialized repellent. Spells that repel 'sea monsters' generically might exist, but are probably relatively high level (and thus far less economical), but a stock of repellent against the types of monsters common on your projected course is likely to be much cheaper.

This provides protection for the same reason prey animals often travel in herds. But more than that, military escorts and/or ships using powerful magic are expensive. And it's not that much more money to protect a large caravan, as it is to protect a single ship.

There's a lot of information generated by all the sea traffic. If you crunch the data, you can get a spotty but still useful picture of what's where. Crunching that data without computers will be a nightmare, but even stale and incomplete information is better than none.

This info can be compiled in many ways. Perhaps the captain of every voyage that's not a military secret makes reports to a central compiling authority every time they dock, and captains about to embark on a voyage can get a summary of what's been reported recently

Every time a ship never makes it to port, that's another piece of useful information. Perhaps every ship is legally required to report an itinerary, so when one disappears it will be known roughly where it was.

You want it to look like nothing special. Pirates aren't going to bother raiding you for a load of sardines.

It's what you do with the boat that makes it special. Firstly use an Ironwood spell to make the boat hard and strong as iron. Fit a decanter of endless water at the rear in a hidden compartment with a rear port. Say the magic word and you have a jet boat.

A Mordenkainen's magnificent mansion can be enchanted on the cabin so you're not living on a stuffy boat. A liberal helping of animate object spells can make the boat virtually sail itself. Finally the immovable rod fused to the keel means the boat can be stopped dead in it's tracks. No monster can drag it under.

With a iron boat that can't be moved and maybe a wizard with lightning bolt, any sea monster will quickly move on to easier targets while your players live in luxury on the high seas.

Not the answer you're looking for? Browse other questions tagged ships shipbuilding or ask your own question.

10
What attributes and how big would a sea creature(s) need to be to tow a ship?
4
Sea-monster resistant sailing ship design