I would appreciate your advice on the climate of my world

There are some things I don't understand. So far I have my map pretty developed but I think I made some mistakes and there are places I am not sure about. I know I made some mistakes with ocean currents. Also I am not sure how to tackle the sea similar to the Mediterranean. It opens to ocean at its own northeast, 30° north, but I flipped the rotation of the planet because I wanted there to be a Mediterranean climate.

I do have one mountain range that lays between 0° and 20° north, which divides that Mediterranean sea from the ocean on its southwest, and basically has a similar shape to Central America. Normally I would consider it to be desert or semi-desert but with those features, I am not sure if there should not be a more diverse region with savannah and Mediterranean micro-climates. Also, I am not sure if I should not make those mountains lower, since although they are mountains, they are mainly underwater and they may not reach as high altitude. 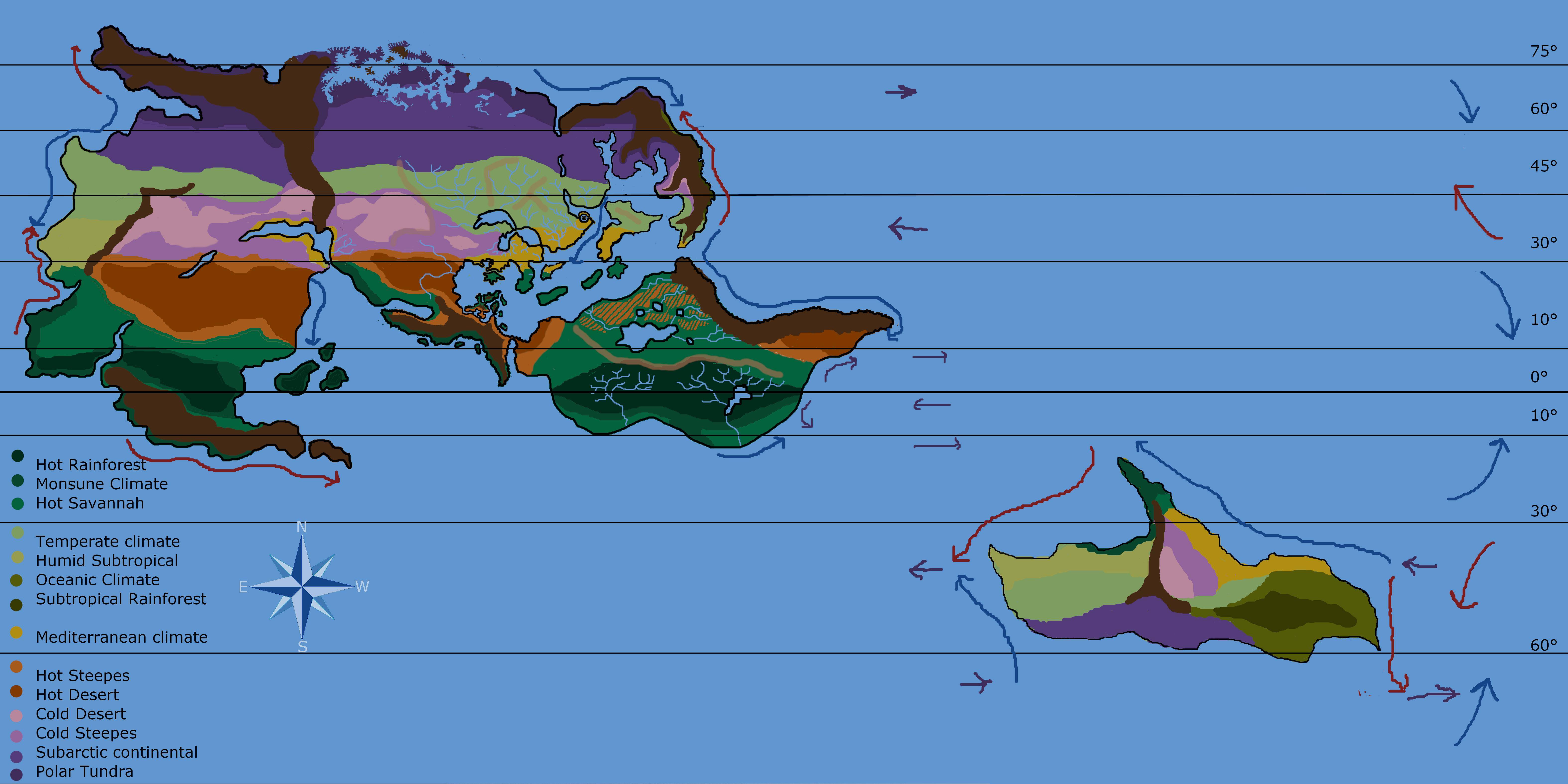 climate weather map-making
Share
Improve this question
edited May 7 '20 at 9:46

well, the world you have a relatively unchanging climate. My guess is the planet has little to no axial tilt, and what caused the mountain ranges on this world was the tidal forces from both the Sun and the moon. So the moon of this world sounds like it's at least half the size of the one here, which means the climate would be milder still.

so weather would be tamer here, and rather uneventful on this world.

also, with mono climate planets, the environment tends to be very uniform throughout the planet with brief to no seasons. given such planets have little to no axial tilt whatsoever.

the means there's areas that'll have an eternal ice-sheet at the poles, and arctic and antarctic regions of the planet.

all in all this planet would be a thing of beauty.

do hope this was satisfactory an answer

Not the answer you're looking for? Browse other questions tagged climate weather map-making or ask your own question.

6
What is the climate of a mountain range at the border of the polar front?
9
Where are the wettest and driest places in this world and why
5
How would a large arctic mountain range affect the weather?
13
Are these climate zones somewhat realistic?
2
Does my climate map work?
6
Advice on accuracy of world map
3
Help with Pressure, Winds, Precipitation and Climate Zone
5
Is The Climate Map for My Alternate Earth Accurate?
3
Climates of a Eurasia-like continent in the tropics