Is there a feasible setup where the Sun has expanded enough to make the Earth uninhabitable, but some of the other rocky bodies in our solar system (past Earth) become more reasonable colonisation prospects?

For the purposes of this hypothetical, let's hand-wave the why and focus on different solar radii and what they do for habitability through the system. I suspect most of the useful range sits between what we have now and substantially less than red giant, but let's work that through!

Let's take an example: Mars. Mars lies 1.52 AU from the Sun. If we plug that in, we see that it could reach Earth-like temperatures (assuming identical albedo and greenhouse effect - more on that later) when the Sun reaches $L\sim2.3L_{\odot}$. That's going to happen at the end of the Sun's subgiant phase - a portion of time after it's left the main sequence but before it becomes a red giant. To take another example, consider Europa, an oft-discussed place for life to arise in the future. Europa requires the Sun to reach a luminosity of $L\sim27L_{\odot}$, in the early stages of the red giant branch. The same holds for any of the moons of Jupiter, and Saturn wouldn't be too far behind.

Towards the far end of its life, when the Sun ends the red giant phase and enters a brief portion of its life we refer to as the asymptotic giant branch, it will reach peak a peak luminosity of $L\sim5000L_{\odot}$. That's . . . well, large. At this point, a body about 70 AU from the Sun would receive roughly the same flux as Earth does right now, and therefore have a similar surface temperature.

The point is, if you wait long enough, virtually any body in the Solar System you'd want to colonize will reach Earth-like temperatures.

Up to this point, we've ignored two things: the albedo of the planet (how well it reflects and absorbs light) and the greenhouse effect. Thinner atmospheres mean less of a greenhouse effect, so for many bodies, our estimate is a little bit off. Still, it's a decent enough approximation, for our purposes - give or take a factor of a few.

In the red giant future of our sun, the habitable zone will expand to include Jupiter. 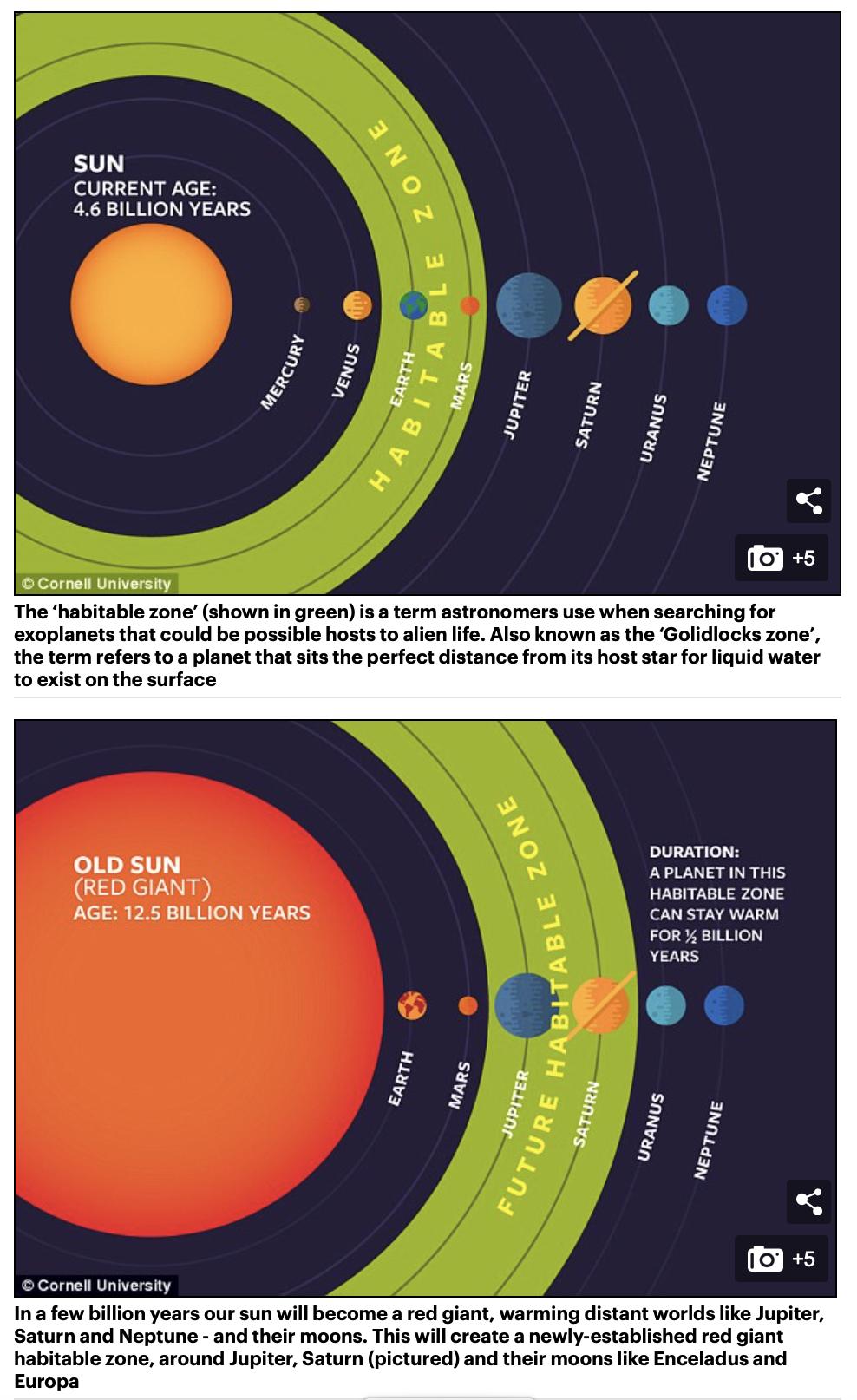 These scientists modeled what would happen with a "hot Jupiter" - a gas giant with moons in tow migrates closer to a sunlike star. In your scenario it is the reverse - the star expands outwards, but I assert the net effect is similar enough for fiction.

The longevity of such an atmosphere depends strongly on the distance from the host star, and the mass and radius of the exomoon. The smaller the star–exomoon distance, the warmer the icy exomoon will become. As an icy exomoon approaches a distance of ~1.1 au around a Sun-like star it will enter a runaway greenhouse state when the surface melts. However, this cutoff is dependent on the albedo of the moon, which was set to 0.2 in this paper...

If the exomoon sits beyond this runaway limit the surface water may persist much longer. Beyond the star–exomoon distance of the runaway limit, there is an exponential relationship between mass and water longevity. For an icy moon of Ganymede's size around a Sun-like star, surface waters will likely persist indefinitely. Large moons of this size will maintain their atmospheres for long periods in the habitable zone and could potentially maintain a liquid surface for timescales greater than 1 Gyr. Thus, such moons could be habitable...

Ganymede! It is earth like in several respects - lots of water and a fair bit of rock. It is almost as big as Mars. When it melts it will get an atmosphere, and will be an ocean planet with salty seas and we are familiar with that.

Your feasible setup can simply be our sun entering its red giant phase in some billions years, nothing fancy.

As it expand, presumably some satellites of Jupiter can become habitable (Titan ? Europa ? Who know this...) also if we cannot know how they will look like.

Not the answer you're looking for? Browse other questions tagged science-based science-fiction space-colonization solar-system or ask your own question.

5
Effect of red giant phase on the Solar System
31
How to effectively slow down a ship about to shoot through the Solar System at 0.6c?
10
How would the 2016 human scientific community react if a massive space-faring alien “whale” entered the Solar System?
3
Colonization via artificial wombs and AI?
3
How do I explain the formation of my world scientifically?
12
How close to each other can Earth-mass planets plausibly form from the protoplanetary disk?
2
How would an AI divide its physical sphere of inflence into a “grid” of sectors?
2
Is it possible to make a stable planetary system like this, and what would the orbits have to be?
9
How can an Earth-like moon meet these angular diameter conditions?
1
The major effects on the habitability of exomoons orbiting this Brown Dwarf