Giant caves. How do they form?

In many fantasy works, the world typically has giant caverns that house entire civilizations and ecosystems that are (mostly) disconnected from the world above. However, this concept, at least in an earth and non artificial setting, is practically impossible.

With that in mind, what I'm asking is:

How can a system of large caverns form?

Some requirements to base our assumptions on:

Big caves on earth are usually in limestone. The limestone is a sedimentary rock that then slowly is worn away and dissolved by water. Caves open up. 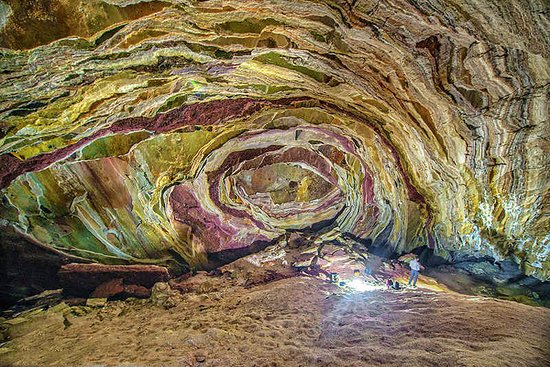 When ancient oceans dry up the salt is left behind. Salt deposits can be hundreds of meters thick. These salt caves are immense, forming in solid salt domes that extend several kilometers.

Salt domes can be very large structures. The salt cores range from 1/2 mile to 5 miles across. The parent rock units that serve as a source of salt are usually several hundred to a few thousand feet thick. The salt domes ascend from depths of between 500 and 6000 feet (or more) below the surface [2]. They usually do not reach the surface. If they do, a salt glacier might form.

Salt deposits are a trip. Some are apparently really old - from the Cambrian! Before there was any life, water and earth were doing their dances.

How big could a salt deposit be? What if the whole ocean dried up?

By some estimates, if the salt in the ocean could be removed and spread evenly over the Earth’s land surface it would form a layer more than 500 feet (166 meters) thick, about the height of a 40-story office building

We have to assume that the composition of the soil is solid enough to support giant cave systems across the entire pangea for this to work. The natural formation of such caves seems unlikely. They would be too localized. So how about a semi-intelligent way to build these caves?

Coral reefs are build out of the materials surrounding the life there. With each lifecycle they create a larger structure that supports itself. Something like this could be extended to this world of yours.

Imagine if a similar lifecycle existed in the ground. They create airways to the surface in order to receive oxygen, but grow towards the nutrients and materials they need to survive. These airways are kept open by the life itself as it creates a layer of materials on the edge of the airway they create for themselves. The creatures living on the edge can keep living as they leech nutrients out of the still undisturbed ground, but the things living in the middle aren't that lucky and will die off. These dead parts will then degrade and eventually be consumed by the creatures on the edge which creates a hole in the middle, a cave.

As long as this "coral" is alive the creatures inside it can gather data from the coral. When we put stress on our bones theres a teeny tiny little electrical difference which our bodies can pick up on and through that guess how much stress the bone undergoes. This information is then used by the body to determine where and how more bone needs to grow to handle these stresses, and where bone can be taken away because it's not used that much and the body wants to be efficient. If this type of land-based Coral would use the same they could keep an eye out for structural collapse. Since a cave-in would kill the creatures living on the cave-in structure and it would potentially cut off a large section of creatures from oxygen they would evolve to prevent this. This causes them to create support structures when they detect a certain amount of stress on their coral structures.

A bit wall-of-texty but I hope it'll give you food for thought.

There are a few ways in which large caves can form.

The first one is lava tubes

A lava tube is a natural conduit formed by flowing lava which moves beneath the hardened surface of a lava flow. Tubes can drain lava from a volcano during an eruption, or can be extinct, meaning the lava flow has ceased, and the rock has cooled and left a long cave.

A lava tube is a type of lava cave formed when a low-viscosity lava flow develops a continuous and hard crust, which thickens and forms a roof above the still-flowing lava stream. Tubes form in one of two ways: either by the crusting over of lava channels, or from pāhoehoe flows where the lava is moving under the surface.

Lava usually leaves the point of eruption in channels. These channels tend to stay very hot as their surroundings cool. This means they slowly develop walls around them as the surrounding lava cools and/or as the channel melts its way deeper. These channels can get deep enough to crust over, forming an insulating tube that keeps the lava molten and serves as a conduit for the flowing lava. These types of lava tubes tend to be closer to the lava eruption point.

The other is through karst

Karst is a topography formed from the dissolution of soluble rocks such as limestone, dolomite, and gypsum. It is characterized by underground drainage systems with sinkholes and caves. It has also been documented for more weathering-resistant rocks, such as quartzite, given the right conditions.

The development of karst occurs whenever acidic water starts to break down the surface of bedrock near its cracks, or bedding planes. As the bedrock (typically limestone or dolomite) continues to degrade, its cracks tend to get bigger. As time goes on, these fractures will become wider, and eventually a drainage system of some sort may start to form underneath. If this underground drainage system does form, it will speed up the development of karst formations there because more water will be able to flow through the region, giving it more erosive power.

In both cases mind that it's very hard for an ecosystem to form here, since there is poor to no access to some energy source. Typical ecosystems forming in such places rely on wastes being carried through flowing waters, nothing too big or fancy.

Same goes for their extension, they can hardly span over extended areas.

Coral reef formation over what was once a large, shallow sea, later uplifted above sea level

What you're describing is almost word for word what happened in the east-central united states, in an area that extends from Missouri and Arkansas in the west to the Appalachians in the east and as far north as southern Indiana and Ohio. What happened was during the Paleozoic this area was a shallow epicontinental sea similar to the present-day Caribbean around the Bahamas, a vast, mostly shallow region about 10-30 feet deep. This was largely because the region was a partially submerged craton, rather than the oceanic shelf.

The buildup of coral reefs in the region due to the widespread, shallow seas resulted in huge amounts of limestone being formed. Eventually, due to falling sealevels and the buildup of this rock, the area rose above sea level, but this large area of limestone remained. The limestone was very fertile (becoming the backbone of the Kentucky-Tennessee "bluegrass region"), but it also meant that it was riddled with caves due to acid rain, and as a result this part of North America is known for its karstland (including very large caves like Mammoth Cave). Karstland is still being produced even though the rock is hundreds of millions of years old, and has been active for at least five million years if not longer (some fossil sites in the region are filled-in sinkholes and cave systems).

If you have a Pangaea-sized region that was once a shallow sea that gradually became uplifted, it would produce a similar effect. Additionally, the high production of limestone might push down on the crust, allowing for thicker limestone over time.

Not the answer you're looking for? Browse other questions tagged reality-check geography geology or ask your own question.

4
How could a mountain range naturally form in a roughly clean, complete shape?
14
How could a planet have zero surface caves?
16
A blue flamestorm blasting through a system of big yellow caves?
10
How might a mountain bowl form?
5
Giant, Periodic Geysers?
3
How to form a huge natural plateau with a slope?
3
How could a "Lonely Mountain" form?
19
Could terrain like this form on Earth? If so, how?
8
How Would the Mountains Form in This Supercontinent?
2
How realistic is finding ore veins in natural caves?