Could a regularly erupting volcano create fertile soil for a fantasy empire to thrive?

I have recently learnt about the flooding of the Nile and the irrigation around it, enabling plentiful crops by depositing nutrient rich silt during bronze age Egypt. I have also learnt about volcanic ash improving soil fertility as well. Is it conceivable that a fantasy empire could be built around this fertile soil? How would they survive the frequent eruptions that regenerate the fertility?

Yes but not really.

What did the floods do?

They replenished the soils depleted of nutrients by agriculture and limited salinity caused by irrigation.

In the Nile valley this is very useful because the soils are brought by previous floods and have a structure that is not particularly suited to retaining its fertility. You can think of the soil as fine sand or clay or mud.

This is obviously a simplification, especially in ancient times when extensive wet lands had accumulated highly fertile soils, but you can fairly say that the particular soils that had been farmed for centuries and were subject to floods had this issue.

Similarly hot and dry climate and easy access to the Nile meant that extensive irrigation was used. And because of that same climate lots of water evaporated on the fields and left behind lots of salt in the soil. Salt in the soil reduces the ability of plants to draw water and nutrients and thus reduces fertility. The water from floods makes the excess salt dissolve and essentially resets the salinity back to a base "after flood" level.

So floods in the Nile valley and Mesopotamia could be potentially very useful in replenishing fertility reduced by agriculture.

Why are volcanic soils different?

The volcanic soil has different composition and structure and only coincidentally happen in river valleys so their agriculture tends to rely on rain water.

The structure of the soil is a big differentiator. The bubbling of gasses during the eruptions produces grains with large surface areas. This makes them suited for making concrete. It also makes them excellent places for nitrogen fixing soil bacteria to live in. And boosts their ability to retain nutrients or water.

This means that volcanic soils not only retain more nutrients, they can naturally recover the crucial nitrogen. In addition volcanic soils can be very thick and extensive. If the soil gets depleted, you can dig or mine more, you do not need to rely on new eruptions.

You can boost this by spreading agricultural waste and ash from fires back to the fields which even "primitive" civilizations can do. This is effective in replenishing nutrients other than nitrogen.

Fertile volcanic soils also often happen on sloped or elevated areas. This is simply because the process that creates them is additive and associated with a process that often creates mountains.

This means that agriculture in volcanic soils often relies on either directly on rain water or at least on water that comes from rains relatively close by. Either case it will carry less dissolved salt than the Nile in Egypt. The climate is also generally not as hot and arid as in Egypt, which has after all essentially a desert climate. And the slopes and the composition of the soil mean the water does not pool and evaporate on the surface.

These factors mean that accumulation of salt is much less of a problem than it was in the Nile valley or Mesopotamia. At least until pumps allow extensive use of ground water or water piped from more distant sources. There simply is neither the same rate of evaporation nor the same volume of salt carrying water to use. Abundant water would have to come from rain which does not cause a salinity issue.

So there is no need to replenish the soil with new eruptions to control salinity.

Is it conceivable that a fantasy empire could be built around this fertile soil? How would they survive the frequent eruptions that regenerate the fertility?

It depends on the frequency of the eruptions.

Look at Etna and Vesuvius, for example. They were known since ancient times for the fertility of their soils, boosted by the volcanic material deposited there.

If the eruptions happen quite spaced in time, say once every hundreds or thousands years, they cause temporary havoc and then allow for settlements.

If they instead happen more frequently, like with some Hawaiian volcanoes, there is no time for proper settlement as long as the volcano stays active.

In 1740 a series of huge volcanic eruptions devastated the island of Lazarote in the Canary Islands. When the volcano settled down, the little rocks that had spewed out and landed on the ground hugely improved the fertility of the fields. 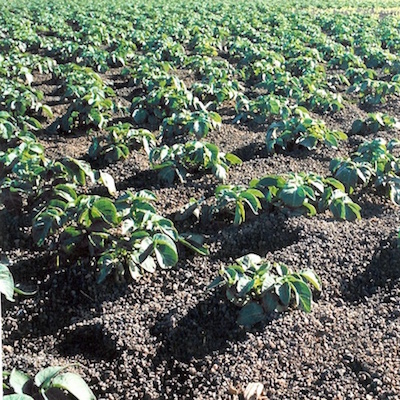 FATHER Andres Curbelo, a priest in the small village of Yaiza in the centre of Lanzarote, provided the only surviving chronicle of the massive eruptions of the 1730s in a report to his bishop in Spain. He described how “on the first day of September 1730, between nine and ten at night, the earth suddenly opened; an enormous mountain emerged from the ground with flames coming from its summit. It continued burning for 19 days…Then a new abyss developed and an avalanche of lava rushed down, running as fast as water, [before] a great rock burst upwards with a thunderous sound and the pressure of the explosion forced the lava to change direction, instantly destroying two villages.” …The geological mayhem continued…

The few thousand residents, a mixture of indigenous Berbers and Spanish colonists, were in grave peril from the explosions and the lava flows and, so it seemed, from famine. Their dry fields, which had once nurtured grasses and meagre crops of grains, were now covered with a layer of black volcanic stones. … As they returned to their wrecked fields across the lowlands of central and southern Lanzarote, looking for anywhere with soil that they could plant their crops in, they discovered something odd. Parts of the island had indeed been obliterated, mostly by lava flows. But in the areas that had become blackened fields of stone, the crops had not died, and in many places they were bursting forth between the stones with renewed vigour.

It didn't take the farmers long to discover why. The black stones shade the soil from the glare of the sun, reducing evaporation. Recent hydrological studies have shown that they cut water loss by around 75 per cent compared with uncovered soils. The pumice-like stones are porous and trap moisture, but they also provide a sterile barrier or “mulch” that stops weeds growing and makes ploughing unnecessary… … (F)ar from destroying the island's agriculture, the stones – which the local people called picon – were instead nurturing the crops… (T)he farmers began to dig small holes through the picon to the soil beneath and to plant crops. They diversified from their usual grains and grasses to fruit and vegetables, having discovered that they too would now grow on the island, provided there was a layer of picon at the surface.

The stones revolutionised agriculture on Lanzarote… By 1776, an anonymous chronicler was recording a “prodigious mutation” of farming on the island. “Marvels abound, with the land being more fertile, becoming fruitful and bearing fruit two or three times a year. Like sponges, the picon soaks up the water, and the crops receive a delicate, gentle watering,” he wrote. “Before the eruptions in 1730, the most the island produced was bread and beef; now on the strength of the picon, it produces grapevines, vegetables, maize, potatoes, pumpkins and other produce.”

So too your land. The volcano spews out stones (bring the kids inside during the stone rain!) that shower the fields. The farmers rake them into organized plots. With the stones and naturally occurring dew, they do not need to irrigate.

People are burning down the Amazon forests to create fertile farm land to grow crops to feed cows to make burgers.

So yeah a never ending fire can have its uses in a modern society as demonstrated by the Amazon fires continuing over the course of 20 years of man made deforestation.

McDonald's and Burger King would benefit a lot from such volcanic activities.

The same is happening in Australia but for similar yet different reason, they don't care about burgers they just want to boost the economy with agriculture... Most of Australia land is infertile.

Humans have practiced arson for agricultural reasons for millenia.

Also, if you think no human being would be stupid enough to settle and make farms near a volcano, then obviously you've never visited Italy. In Naples people literally live inside a volcano.

Not the answer you're looking for? Browse other questions tagged magic civilization agriculture volcanoes empire-building or ask your own question.

7
How close is too close for a human habitation to be near an erupting volcano?
8
How could a world develop where it was necessary to mine all soil for agricultural use