In RPGs, "tanking" is where one heavily armored character forces a monster to attack him or her, permitting the rest of the party to attack and kill the monster without fear of taking damage.

Is there a plausible way for this to happen without arbitrary video game mechanics? In other words, are there any real-life techniques to force an animal's attention on oneself?

Assume this is a low-magic, medieval setting -- your typical fantasy genre world.

The line between "arbitrary video game mechanic" and "magic spell" can be blurry, so for clarity's sake, I'll lay out an example scenario:

Suppose humans are low on the food chain, and therefore hunting extra-large animals has become a squad-based military endeavor.

I'm not talking dragons, but creatures about this size: 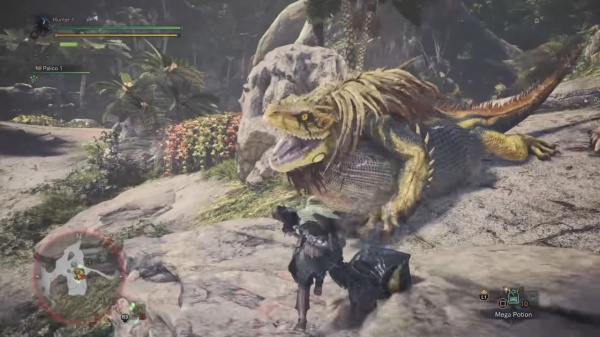 Let's say some hunters want to kill a monster using an RPG-style tanking strategy: Team A reliably holds the monster's attention, keeping it from noticing Team B who circles around and severs its arteries, maybe mounts it and pierces its spine or brain.

Is there a way for Team A to reliably (not perfectly) hold the monster's attention? (In other words, is there some plausible way that RPG-style tanking could exist?)

The good news is that wolf packs basically do this in real life when they hunt large prey (or fight with bears): Surround and jab. This grounds the idea in reality.

The bad news is that I don't know how one wolf could hold the prey's attention the entire time. If another wolf started climbing on the prey, you can bet the prey would switch its attention to the climber, and not the aggressor in front of it.

I'm speculating that, if the "tanking" hunters use some flashy, shocking, painful weaponry -- maybe a small fire spell that's high in pyrotechnics, or a magic whip that delivers electric shocks -- then they can reliably hold the attention of this ferocious, desperate, giant animal (that probably wants to run for its life). That the shock and pain and noise of a bombastic frontal assault will keep the beast's attention off the speedier, stealthier hunters nipping its arteries or crawling on its back. Something like:

But that's pure speculation, and I'd really like a concrete precedent, if one exists. Is there a plausible way to do this?

The monster decides whether to turn, so any tactic that relies on it not turning implicitly gives the monster an unnecessary advantage.

You still get attacks from behind regardless of which way the monster turns and it is distracted from effectively dealing with people in front of it. This is more reliable since it does not directly depend on an monster cooperating with your tactics and safer since it distracts the monster from people it could effectively attack instead of trying to get it to focus on them.

So you want your tanks to surround the target and cooperate in stopping it from focusing its efforts effectively in any single direction. Just like the wolves do.

This would actually probably be sufficient. Blood loss from the spear stabs and arrows would eventually kill the beast. And just like wolves you can target the hind legs to hinder its ability to attack, defend or flee. You can kill it safely once its too weak to move. Going for a spectacular killing blow before its safe is not really hunting.

Since you are not actually wolves, you can supplement this with archers. You already mention using poison arrows to slow it down but using bows to attack it has value beyond that. You can use them to supplement the spears in the "attacks from behind". Basically the archers will draw and aim and shoot whenever the "tank" between them and the monster attacks.

This keeps them reasonably safe while contributing to the battle since the tank is between them getting aggro for the attack from behind. It makes the tank safer because he can focus on the timing and defense instead of trying to reach a critical target. Because the arrows have better reach and speed than a spear the archers can worry about accuracy and vulnerable spots. As long as the tanks do their job they have the time to think and aim.

So narrowing down the question to just what will make a large beast (predator?) attract to an individual and not the potentially more dangerous group:

Not the answer you're looking for? Browse other questions tagged reality-check warfare medieval fauna or ask your own question.

9
How will military be modified if a warrior power could continue growing far beyond human limits with experience?
5
How do you keep magical creatures trapped in a closed village while allowing for expansion?
1
How large could a frog be?
5
How would an RPG style job or class system work?
11
How could a medieval fortress manage large groups of migrants and travelers?
6
How large could a giant turtle get?
1
How effective could a dragon be in wwII style warfare?
5
How large could an aquatic humanoid get?
0
Figuring Out Monster Ecology
3
How could very large (but not that large vehicles) be used in combat?