How would you capture deer alive in a medieval setting?

A medieval kingdom needs to capture deer, both male and female, alive and uninjured. How would they go about doing this?

By using deer traps, like they did in medieval Europe:

A Deer hay wind, Deer fold or Elrick is an artificial, natural or modified natural feature used in the culling, capture or management of deer in relation to deer parks or natural woodland and open countryside. These structures have existed for many centuries... Evidence that during Saxon times deer hunting was taking place in this fashion survives in a tract written by a 10th-century monk called Ælfric who wrote "I weave myself nets and set them in a suitable place and urge on my dogs so that they chase the wild animals until they come into the nets unawares and are thus ensnared and I kill them in the nets."

Persistence hunting means running the animal down; chasing it until it cannot run any more. It is a human superpower. Our ancestors could do it. We still can.

Back in 1978, Michael Baughman wrote an article in Sports Illustrated about how he outran a deer. The deer is more of a sprinter, than a marathon runner. On a warmish day (around 27°C) it took him about four hours to run down the deer over a distance of 24 kilometres, across the open range lands and orchards near his home. He got to within a few metres of the exhausted animal, talking quietly and soothingly, and then touched the deer's sweaty flank. Unlike our primeval ancestors, he let the deer escape.

The deer you catch this way are going to be exhausted and are not going to be able to walk back to the castle once caught. They will need to be bundled up and carried back, or tethered where they are caught and allowed to recover.

Easy, without killing anything, if you have the time.

Ask your local game keeper when the fawns are born. When that time comes, take the sweetest hunting dog you can find (a scent hound works best). Then go out and find the fawns; they will be tucked away and will not move when you come close.

The fawn stays hidden in the grass for one week until it is strong enough to walk with its mother.

Pick it up and take it home with you. Rinse and repeat until you have a half dozen (just to make sure) of each gender. Feed these little ones on cow's, sheep's or goat's milk. You might even find surrogate mother that will nurse the fawns for you.

Make sure you, and other people who are good with animals, spend a lot of time with these fawns, as they will be skittish animals and you will have trouble keeping them safe. But you have access none the less.

Nets work. Hunters have been using nets for thousands of years. You might injure a few, but keep trying, soon you'll have a good breeding colony for the King's Forest. 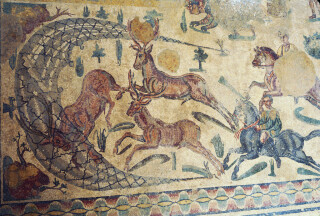 Using the most ancient hunting method that left traces visible to the archaeologists. Create a big enclosure with dry stone walls and landscape features. Add two V shaped walls leading to the entrance. Chase a herd with a group of people and/or dogs pushing the entire herd towards the enclosure. Traces of such enclosures dating to the stone age have been found in the Syrian desert.

Otherwise it can be even easier, kill the adults, take the calves, cubs, pups.

Kill the doe and take it's young while they are still helpless, bottle-feed as necessary. Capturing young is still the main way in which many types of wild animal make it to the pet market.

Yes, it's horrendous but it happens.

There have been small or large scale exotic animal trades all over the world and all through history.

For example, there was a particularly large scale exotic animal trade in the time of the late Roman republic and the Roman Empire, dealing in exotic animals to fight or be exhibited in the areas in Rome and other large cities.

I believe that in the later middle ages, the Norse colonies in Iceland and Greenland exported live falcons to Europe.

In the medieval era, the gyrfalcon was considered a royal bird. The geographer and historian Ibn Sa'id al-Maghribi (d. 1286) described certain northern Atlantic islands west of Ireland where these falcons would be brought from, and how the Egyptian Sultan paid 1,000 dinars for each gyrfalcon (or, if it arrived dead, 500 dinars).[28] Due to its rarity and the difficulties involved in obtaining it, in European falconry the gyrfalcon was reserved for kings and nobles; very rarely was a man of lesser rank seen with a gyrfalcon on his fist.[29]

When the Norse first colonized Greenland, gyrfalcons were a valuable "export" and were in great demand by traders who dared to venture out from medieval Europe.

Greenland gyrfalcons were so valuable that, in 1396, just twelve of these birds were enough to free the Duke of Burgundy's son after he was captured by the Saracens during the Crusades and held for ransom.

It has been claimed that a cockatoo from Australasia is depicted in Emperor Frederick II's 13th century book on falconry. The bird would have been captured in or near northern Australia or New Guinea and shipped to Egypt and then eventually sent to Europe in trade or as a diplomatic gift.

So Emperor Frederick II could have had birds from as far apart as Iceland or Greenland and New Guinea or Australia at his court.

In Gaul in 613, the child king Sigebert II of Austrasia and Burgundy was deposed and killed, and his great Grandmother Brunhilda was also killed:

Then the army of the Franks and Burgundians joined into one, all shouted together that death would be most fitting for the very wicked Brunhilda. Then King Clotaire ordered that she be lifted onto a camel and led through the entire army. Then she was tied to the feet of wild horses and torn apart limb from limb. Finally she died. Her final grave was the fire. Her bones were burnt.

So there were at least a few camels in Gaul in 613.

Empress Theophano was regent of the Holy Roman Empire from 983 to 991 for her young son, Emperor Otto III.

Even though he was only six at the time, Otto III personally participated in these campaigns. During the expedition of 986 against the Slavs, Otto III received the homage of Duke Mieszko I of Poland, who provided the Imperial army with military assistance and gave Otto III a camel.5

So in 986 the ruler of Poland had a camel to give as a gift.

What is more, I have heard of a few elephants present in western and central Europe between about 500 and about 1500.

The Annals of Innisfallen record that King Edgar of Scotland gave a large, exotic animal to Muirchertach Ua Briain in 1105, possibly an elephant but more probably a camel. (Annals of Innisfallen, s.a. 1105; A. A. M. Duncan, Scotland: The Making of the Kingdom (1975), p. 128)

The elephant which King Louix IX of France gave to King Henry III of England in 1255. Note that the picture indicates it might have been an African Elephant instead of an Asian Elephant.

The elephant given by Afonso V of Portugal to René d'Anjou about 1477.

Since the Portuguese didn't reach India until Vasco de Gama's expedition in 1497-99, this elephant would probably have been African.

The merchants of Cyprus presented Ercole d'Este with an elephant in 1497.

And after the Middle ages ended about 1500 it is said that at least 13 Asian Elephants were imported into Europe by the Portuguese.

So these examples show that during the middle ages people did transport flying creatures like birds, and large exotic animals like camels and elephants hundreds and thousands of miles from their homelands into various parts of Europe.

So captive deer could have been transported as far as your medieval kingdom needed to transport them.

The question about how to capture the deer in the first place is more difficult, but if medieval Europeans, Asians, and Africans could capture flying birds and huge elephants alive, they could figure out methods to capture deer alive.

Is it ok for them to have a small dart wound? If so, then a good way to go about it would be to create a simple sedative, and throw short tipped darts (As not to go deeply into the deer) at the deer. I am going to assume that this civilization is advanced enough to create a sedative powerful enough to temporarily incapacitate those deer.

A different option that has less of chance of working is to make a line of food that the deer enjoy going into a small stable. (1 per deer) The deer might follow the food, go into the stable, and the door can then be shut.

Not the answer you're looking for? Browse other questions tagged medieval medieval-europe middle-ages or ask your own question.