What would one experience travelling through an invisible Krasnikov tube, and how much could they be used to cut travel times?

Effectively what the title says; What would different observers experience while travelling through / seeing one travel through the tube, and how could they be used to cut travel times? (Just answering one of these questions is ok)

Within my world, I have no "proper" (causality violating) FTL travel; only Wormholes, subluminal warp drives and Krasnikov Tubes. I had the idea that a very large line-layer ship with 2 wormhole mouths could travel to a system, lets say 10 light years away. The ship could then break in twine and send one of the wormhole mouths back through the tube while expanding the other on site. The wormhole mouth sent back would appear after I had originally left, as far as I'm aware, the ship-time it took me to get there. So assuming I was moving at highly relativistic speeds so that the 10ly journey was 1 year, the wormhole mouth would arrive at Earth 1 year after I had left, effectively acting as if my linelayer ship could travel at 10c, and massively increasing the amount of systems I can colonise within a certain timespan. I just wanted to know if this could really work without causing causality issues? (CTC's destroy causality violating space-times in my universe)

Okay, even if these are in fact three highly connected questions I'll try to answer them as good as possible.

What would observers experience while seeing one travel through the tube?
A Krasnikov tube is in the end nothing else then a wormhole with some special settings and abilities, so traveling trough or into one is not different for the observer. In theory a wormhole is not that much different from a black hole regarding effects of gravity and matter with the special difference that where we can see nothing in the center area of a black hole we see the area of the universe where the tube Ends in a wormhole . So watching someone enter a Krasnikov tube is like watching him entering a black hole. As even light is bend by the gravitational forces, in the view of the observer the object entering the hole gets elongated and deformed until it seems to vanish in the circular border of the hole.

What would observers experience while traveling through the tube?
According to Luke Butcher, theoretical physicist at the university of Edinburgh (in an interview concerning the movie 'Interstellar'), their presentation of wormhole-travel is highly realistic.

"Things will look a bit like you're traveling down the center of a wide tunnel. Directly in front of you you'll see the region of space you're heading to, and behind you is the region you've left behind. These views would be surrounded by concentric circularly-distorted repeats of the same view, a bit like an Einstein ring, with the whole sky (of one end of the wormhole) wrapped into a series of rings that get more and more closely packed together as you move your line-of-sight from the longitudinal direction, to a perpendicular direction." (L. Butcher) 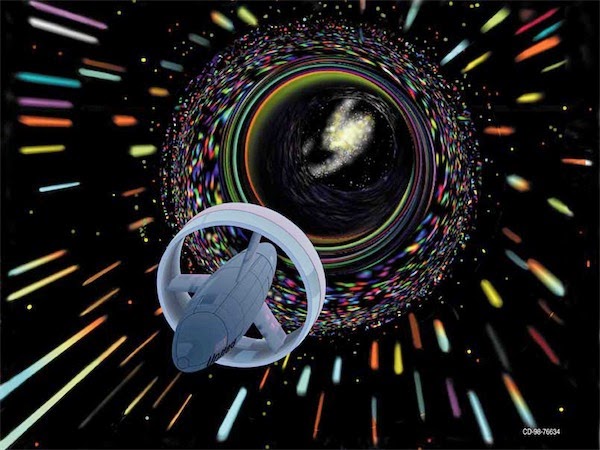 How can it be used to cut travel-times?
I'm not realy sure what you want to do here. As stated above, Krasnikov-tubes are already special cases of wormholes so 'bringing a wormhole through it' will not change anything as you had to implement the Krasnikov tube in the first place. The cut in travel time will depend on the structure of the wormhole/Krasnikov tube and can not be answered in general.

So 4 Dimensional space is super hard to express in a 2 dimensional diagram, but here is the best way I can think to show it: 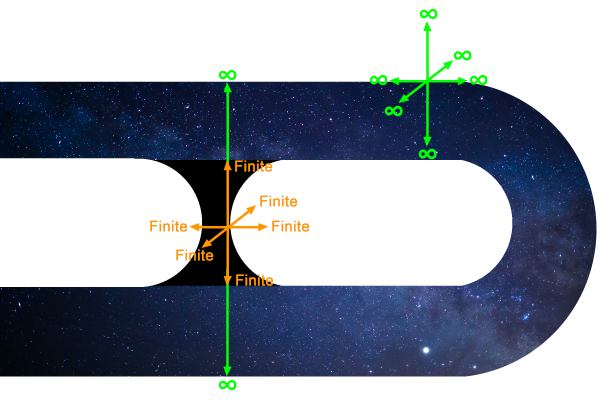 We are used to thinking in terms of infinite space where you look in a direction and there is something to see/somewhere to go as far as the eye can see, but this is not the case with finite space. Now how finite space expresses itself can happen in a few ways:

Option A - Reality has a vector terminating edge: In this scenario, the edge of reality resolves itself by looping perpendicular movement into parallel movement. Much like your mouse cursor being stuck inside of the workable area of your monitor, there is a point where there is literally nowhere left to go. When the light from your ship hits the edge of the tube it will simply not have anywhere to continue going along that vector so it will bend to follow along the edge of reality. When you look around inside of this version of finite space, you will see only darkness with the exception of the points of light entering at either end of the tunnel.

Option B - Reality has a vector reflective edge: In this scenario, the edge of reality resolves itself by looping perpendicular movement back into itself essentially reflecting any light or matter that touches it. In this model you could see the edge of reality by the light it reflects back at you. Traveling in a wormhole that does this would look like flying through a cylindrical mirror.

Option C - Reality is wrap-around: In my opinion, this is the most likely scenario for a wormhole. In this situation, you could never actually hit the edge of reality, but you could see yourself and the light that you are radiating. Here you would see infinite versions of yourself spreading out into space to every side. You could fly left right up or down as far as you want, but you will always end up just circling back to your original location in that dimension, but forward and backwards do not loop because they let off into regular space when you hit thier boundary.

A few things that will be true of all three versions of finite space:

While a few solutions have been suggested to say that they don't "necessarily" violate causality, their basic concept is almost impossible to justify in a world where causality violation is actually impossible without hand-waving in a bunch or rules of physics just to control for such exploits. Since you don't want to challenge causality, I would just stick to normal wormholes if I were you.

Using normal wormholes, the expansion of you empire would be limited to the speed of light, but once you have a network of wormholes, you could quickly move new line layers to the edge of your expanding empire from inner worlds to start laying new lines from the outside of your sphere of influence. It is also possible that your civilization will occasionally hook up with alien civilizations (living or dead) that have already built thier own networks of wormholes. When this happens you could very quickly expose large new areas of space for exploration, colonization, and conquest.

A Krasnikov tube differs from a wormhole in that the "throat" of a Krasnikov tube actually occupies normal space, and the mouths are effectively two dimensional.

The wall of a Krasnikov tube is formed from extremely distorted space which compresses a huge distance along the outside surface into a very small distance along the inside surface. Unless the spacetime of the tube is additionally specially engineered to bend external radiation around it, an observer traversing the interior of the tube would see pretty much the same thing they'd see traversing normal space... but with the side view longitudinally compressed, thus increasing the radiation intensity. This might end up putting a practical limit on the amount of travel-time reduction you can get with such a tube, since you wouldn't want your travelers to get fried by amplified star light.

An external observer would see right through it, possibly with some radial distortion from light being bent by its passage through the tube walls. A vehicle passing through the tube would appear externally to accordion out as it enters, with its image stretching by the spatial compression ratio of the tube, and then collapse again as it exist the other end.

Unlike a wormhole, the space inside a Krasnikov tube is not cyclic, so you would not be able to see yourself, or ring echoes of the surrounding environment, looking off to the side, nor can you move an arbitrary distance off to the side while inside the tube. Rather, the walls of the tube would feel much like regular solid walls; any matter that tried to force its way through from the inside would be violently torn apart, while matter impacting the tube from the outside would be compressed.

and how could they be used to cut travel times?

By reducing the distance you have to travel. That's the whole point.

I just wanted to know if this could really work without causing causality issues? (CTC's destroy causality violating space-times in my universe)

If you build your network carefully, yes. You will be restricted in the order in which you build a cyclic network of tubes to ensure that no lightlike paths through the network end up being closed, but that is certainly doable. If you end up running into the borders of some alien civilization's independently-constructed tube network, however, you may run into problems.

Not the answer you're looking for? Browse other questions tagged science-based space-travel faster-than-light or ask your own question.

11
What if time travel had to take into account spatial distance?
6
Can this version of the Alderson Drive be used to violate causality?
4
How far can space time be warped, twisted, and pulled?
6
How does space between ends of a wormhole work?
6
Avoiding Violation of Causality with Stable Wormholes
5
(Please Someone Explain) Is time travel using wormhole as portals possible logically?
27
The worlds between, the consequences of instantaneous FTL
14
Could you carry a wormhole through another wormhole?
1
How Long Would Interstellar Expansion Take at Our Current Population Growth in This Circumstance?
8
Can we safe FTL from paradoxes by using a Multiverse?