What could have been the history of a world where programming skills are considered to be basic literacy?

There are lots of efforts for better connecting to customers, like developing good functional languages for requirements, but then we have got non functional requirements which still need to be clarified with customers, and again the gibberish problem.

Then I have thought, what could a world look like where creating code is something considered to be literacy?

Or, nevertheless interesting, what could have been its history and how many centuries might it realistically take between the event of writing the first digital computer code and say 95% of adult population have programming skills at the level compared our society is capable of reading and writing?

We do not have to start from zero, I am still collecting facts for reality check if such society could indeed be possible, as constraint based on free will (more or less).

So these are my considerations so far:

What are basic programming skills in this context?

Image: development of world literacy (as seen on History SE). 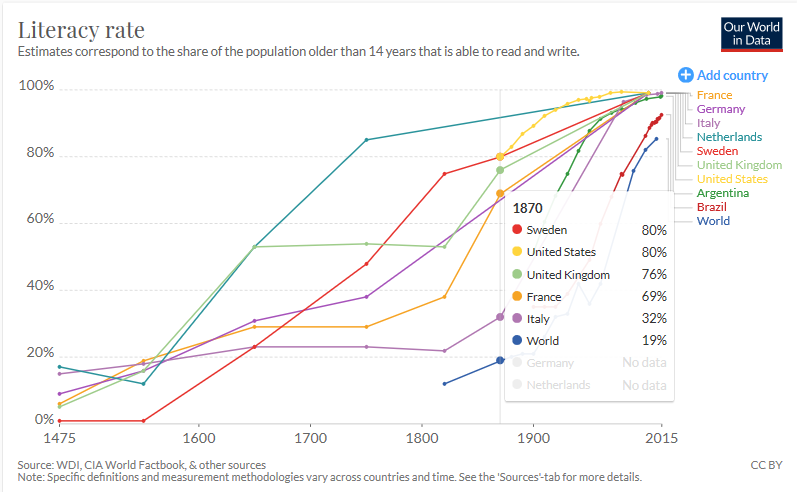 Give us a few decades and we will probably get where you want to go. Already, our children are playing with programmable toys, competing in toy robot wars and instructing their evermore powerful cell phones to perform automated tasks. As this trend continues and as those simplistic programming skills become more helpful in attaining career and life goals, the knowledge of how to program will spread out across the populace.

We are becoming a tech-literate society. Few of us know anyone under 70 who doesn't know how to email, text, twitter and chat. And most of those fledgling tech-literates know how to customize their computers, phones, etc. Programming is just the next step on a path they are already on.

Programming languages are not practical in any day-to-day capacity for 99% of people. Because we call it a language people assume that it could be an analogue to spoken languages but it is not. Communicative literacy is universally learned because it is a skill that all people in all industries need. Programming literacy however is more comparable to a tradesman skill like carpentry or plumbing. It takes a LOT of work to get good at, society only needs a few people to be good at it, and amateurs often do more harm than good.

For this reason, treating programming as a basic form of literacy is actually detrimental to society. The thousands of manhours everyone would spend in a lifetime trying to become computer programming literate for the 3-4 times they might ever need it instead of paying someone for a few hours here and there would cause all of thier other industries to stagnate for very little benefit.

What are basic programming skills in this context?

Have you ever used Microsoft Office?

Chance are that if you:

Then you probably used Microsoft Excel, or an open source equivalent.

If you did, you probably used formulas. The simplest, most used one is the summing one, which can be written as:

Not everybody will have used the IF function, or the more accountancy-intensive ones. But in my opinion, if you used a function at all, even the basic four math operators (syntactic sugar for the actual functions), then you are a programmer by the criteria set by the question.

If you did use a formula, congratulations, you match the criteria for having basic programming skills. That is a huge lot of people. You claim there are thirty million coders nowadays, but Excel users reached that amount in 1996. Three years ago the estimated number of people using Excel was half a billion, or about one in every 14 humans.

Now for a little bit of history. Before being used for machines, the word computer referred to humans. A computer was someone who would perform complex calculations for someone else. Don't trust me just because I am saying it, go check it out. So people are able to compute as much as electronic computers do. The only skill you needed to excel in that field was being good at math.

Math is a universal language and even your browser console will understand things like "2 + 2". Press F12 and try it now ;) If you take a few minutes to learn how to do a condition, or how to code a small function - congratulations, you pass the question criteria to be a coder.

Now, one thing is knowing how to do stuff. Another is knowing how to do it well. Yet another is making a living off of it. Everybody in this site knows how to read and write[citation needed], but I bet most of us don't make a living of writing, specially writing about fictional worlds. And nobody here will starve and be unemployed BECAUSE they can't code.

Maybe your question was more about a world in which most people would have enough skill in coding to be able to do it professionally, even if they chose not to. My bet is that such a world would be to our real world, what our real world after mass literacy is to our world before mass literacy. There is no way to make an accurate guess, but my two cents are that:

I'm going to offer an alternative thought/answer and state that a society that had near universal code literacy would historically be extremely litigious, overly formal/ritualistic and over-governed. It would also highly influence thought and the ways people would express themselves over time in vocal language. Note that I am speculating about a far-future society.

Let me explain: Code is, a highly formalised language set that is simply math & logic. The formal nature of code means that over an extremely long period, this would highly influence other attributes of society. As a practical example, today we have more and more people looking at "Code as Law" (e.g. Look at this and this, plus googling will bring up a myriad of thoughts on the topic). Beyond this, you now have blockchain-enabled contractual agreements. If you look any law set from your country, you will see how they are laid out very similar to code (which, and this is opinion here, I think is the reason the parallels are drawn): You have "if" conditions, "and" conditions, calls to other functions (regulation or other legislation), exceptions etc. etc.

Speculating, you could evolve a society from such bases into a future state. You could rightly speculate that there would be major influences in:

Not the answer you're looking for? Browse other questions tagged reality-check computers futurology education .

6
What would the world be like if computer software did not have any "undo" feature?
62
How can there be different religions in a world where gods have been proven to exist?
8
Can we have a world where bacteriophages are the main treatment of bacterial infection?
23
Could a supertall building have been built in the 18th century?
5
Could a magic-filled world have religions that are unrelated to magic?
32
At what point in European history could a government build a printing press given a basic description?
37
What non-electrical, basic tool from today, could be made that would change the world in ancient times?