What aquatic life would utterly deplete the soil of a specific nutrient?

In my story an area was formerly beneath an ocean or lake. Some form of life leeched the soil of a specific mineral or substance.

Technology level is that of ~1700 Spain.

Now that the water has retreated over a geological timescale and this lifeform is gone, the soil is still so deficient that crops cannot grow on the land, even with typical fertilisers. The only thing that does the trick is fertiliser made from the life form that originally depleted the soil, as it obviously has a high concentration of this mineral.

The soil actively supports large scale agriculture but only when continuously supplied with a specific fertilizer. This situation has persisted for decades and will continue for the near future at least. The fertilizer is a single point of failure without which agriculture would start to fail.

What form of life would be capable of leeching a lake/ocean like this? Plant, animal and otherwise are all acceptable. Extinct or current makes no difference.

Your missing element is sulfur. 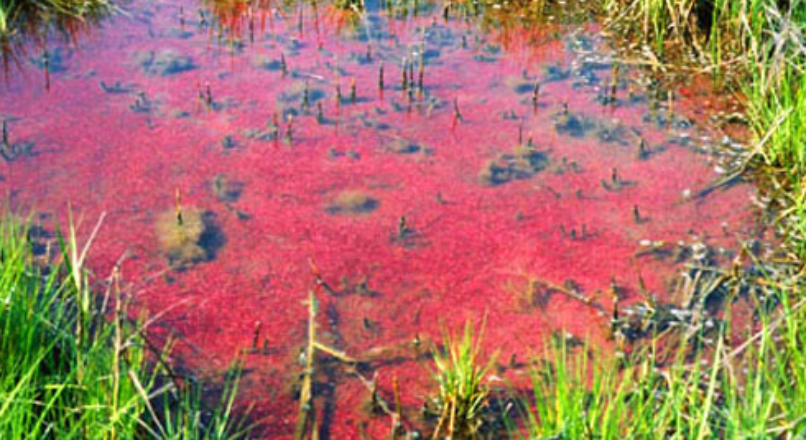 A closeup: you can see the granules of sulfur these organisms accumulate within their bodies. 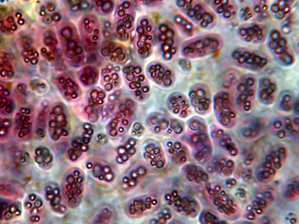 These bacteria belong to the purple photosynthetic sulfur bacteria that oxidize sulfide into sulfur which is deposited in intracellular granules in their cytoplasm.3

Sulfur deficiency is a real agricultural problem. It is not hard to deplete some soils of sulfur. 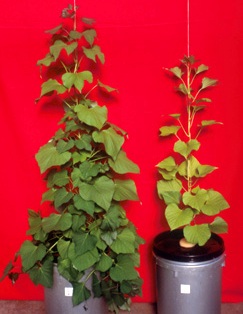 Sulfur deficiency in soil is more problematic in the US over recent years because of the phase out of high sulfur coal. Burning that coal caused acid raid but the sulfuric acid in the rain helped replete soil sulfur.

This is what you wanted - an organism which collects a nutrient. I will assert here that the accumulated bodies of the purple sulfur bacteria dried up and blew away when the water dried. Maybe they had a burst of growth right at the end and the water turned red.

Now the soil that is there has no remaining sulfur and crops are stunted. If this red growth can be skimmed from other waterways, the sulfur in the bacteria can relieve the deficiency of the soil.

You may have the opposite problem.

Land "reclaimed" by nature from shallow, low- or non-flowing water by a natural process called eutrophication (filling in with vegetation that forms mats and eventually replaces the water with vegetable matter) may be poisoned with hydrogen sulfide or other sulfides. Hydrogen sulfide trapped in the soil would make the land stink, but it might also reach local concentrations that could be lethal to animals who graze there, or farmers who attempt to till the area. Hydrogen sulfide and other sulfides, in an oxidizing environment, can form sulfates when rehydrated, leading to acid soil that inhibits growth of many crops.

Acidic soil can self-renew acidity, especially if it's porous and has some circulation of ground water. In this case, it might be impossible to raise some crops without continual addition of a buffering agent like chalk or soda ash.

The soil actively supports large scale agriculture but only when continuously supplied with a specific fertiliser. This situation has persisted for decades and will continue for the near future at least. The fertiliser is a single point of failure without which agriculture would start to fail.

Apart from calling it a fertilizer, you are basically talking about water. Since the beginning of agriculture, no crop can grow without water, and this situation will last probably as long as we human will be on this planet.

We can grow crop without soil using hydroponics, but as the name suggests we need water for it.

And plants/trees, with the humidity they release through their leaves, are an important part of the water cycle. And by doing it they deplete the soil from water.

Not the answer you're looking for? Browse other questions tagged biology geology chemistry agriculture zoology or ask your own question.

5
What would cause plant life not to spread onto land?
6
What is the range of lava/magma viscosity on exoplanets; what conditions would have the least viscous lava lakes?
4
Could plants absorb ice dust from the soil?
9
What would be the most efficient way to farm humans?
10
Would A Biological "Cold Haber" Process Deplete an H2/N2 World of its H2 or N2?
3
What special attributes would a specific age range possess making it preferrable for exsanguination and life force transference?
1
How would aquatic life adapt to the oceans becoming highly corrosive?