In my story, I would like to have a contemporary Mars Rover find not only evidence, but a mostly complete skeleton of a homo sapiens that perished around 50,000 years ago when it was exposed to the surface (due to a misguided, childish experiment by aliens).

As much as I do love Curiosity, Opportunity, and others; their abilities can barely scratch the surface (literally) of Mars. Although I'd entertain a near-future rover that can, say, explore the polar ice caps for a frozen skeleton, I'd prefer it to be one of our current champs.

So, how can a 50,000 year-old skeleton (or body) survive the elements to be found by our robot pals on Mars?

Mars has excellent conditions for mummification.

There isn't much you actually have to do except leave a body on the surface. Mars will do the rest. The corpse will desiccate fairly quickly and will then hardly decompose over the centuries. With the very cold climate, minimal and dry atmosphere, and no microbial life there isn't much that will be able to decompose it.

The main issue will be wind erosion, but it's minor, and mummies have been found in less ideal environments. An example of these is seen in Antarctica, some seal mummies have been found on the surface that are as much as 2,600 years old. It's worth noting these are accidental mummifications, the animals simply died there and mummified naturally. They still have skin after all that time, the bones will last much longer.
As mentioned by Jake, the Atacama desert is another excellent example as it's used by NASA to simulate a Martian environment. Some of the mummies found there are almost 9,000 years old. Granted, those mummies were intentionally prepared, but clearly the environment is highly favorable for mummies.

Earth mummies have active microbial life chipping away at them, Mars won't have that. The only microbial life will be that which was brought in the gut of the human, and it is not suited for survival in those conditions. The gut bacteria will be the last thing in the human to die, but it will die.

Aside from the small amount of wind, it's pretty similar to being a corpse in space. Finding a 50,000 year old skeleton or mummy on Mars would be shocking indeed, but not because we would have expected it to decay. If a human died on Mars in the distant past, it would actually be a surprise not to find the body.

It was all my fault. I sat frozen in my chair as the cameras swung widely around. Dr. Hoover had told me to stay away from the edge, but I'd seen something glitter and curiosity (no pun intended) had gotten the best of me. And now all I could do was pray and hope as I watched the rover roll and bounce down the hill.

Dust and rocks filled the camera, and I winced as I realized I'd caused a landslide as well. My hope that the rover would land miraculously upright and be recoverable seemed more remote than ever - it would almost surely be buried. My heart rose as the camera came to a stop, but then sank down again - the rover was at a nearly 90 degree angle, and was almost certainly stuck.

I sat forward and took in the scene carefully. It appeared now that a cave had partially collapsed - I wondered if maybe I hadn't actually gotten too close to the edge, that the weight of the rover had caused it to crumble. Maybe it would have happened to anyone. Dazedly I watched the camera pan around, and then focus near a white rock...

My shriek filled the room, and I fell out of my chair, gasping on the floor. My heart pounded in my chest and blood roared in my ears. It was impossible. My mind was playing tricks on me.

I stood back up on unsteady feet and braced against the desk, staring at the monitor. And the skull staring back at me. I lifted the phone with a trembling hand to call Dr. Hoover.

I imagine the rover noticing a small rock coming out of the ground with different looks and different chemical composition, it analyzes and then discovers its just a small part of a bigger solid object just barely underground, then depending on what you want, the rover can see the skeleton through it and/or earth can sand a machine just to take it out from the ground, I picture something like this: 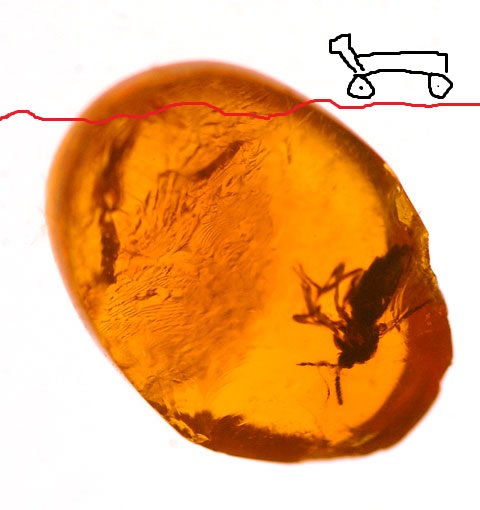 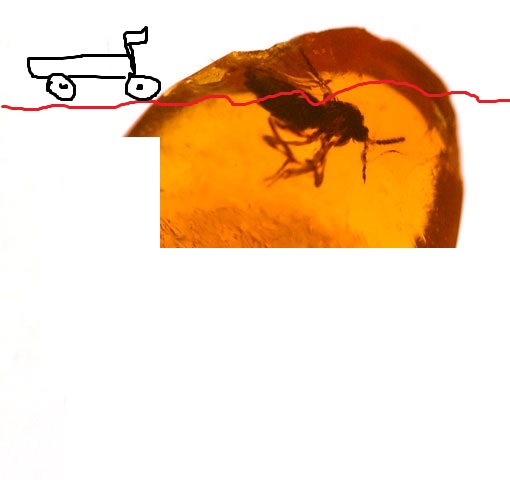 just imagine a skeleton instead of a mosquito

Not the answer you're looking for? Browse other questions tagged aliens mars proto-human skeletons .

16
OK, I cannot fake the Mars landing. Can I fake Martians?
3
How can future Mars colonists combat intelligence loss?
9
How to prove Mars landing
14
Designing a flag for Mars: drag and proportion
7
How can the army government ensure Mars mission success?
43
How do I keep my remains safe from being summoned as a skeleton?
6
Terraformed Venus and Mars
10
How can I change Earth to become like Mars?
3
What if Mars and Venus switched places?