Is mining the riverbed in a Venice-like canal city for metal ore feasible?

In a city built on a swamp, composed of many islands linked by canals, like Venice, would it feasible or cost-effective to build sealed tunnels down to the riverbed to mine an expensive metal ore?

reality-check economy cities
Share
Improve this question
edited May 16 '15 at 12:59

The answer is ultimately yes...with the value of this metal as you state, it becomes worth the risk. People will die...mining under a river is not a simple task and history is littered with instances of drowning miners. Risk to reward of course.

The first thing to note is they aren't exactly modern here, so surveying is not a simple task and it makes it challenging to figure out how deep the mineral seams run and the make-up of the ground between the mine and the river. The second is water is outright heavy and water volume will vary. What might work under normal circumstances might become a disaster during peak flow periods into the swamp. And third...we're talking a swamp, so most likely it's clay formations (which tends to 'flow') and some sedimentary rock which lacks in strength. One wrong move and you get a crack to the surface and the mine floods. I honestly have no idea how a Victorian era people would remove water from a flooded mine either.

For this type of endevour, I believe you'll want to leave somewhere in the range of 60m of solid land between the river bed and your mining operations, however thats kinda asking for a major issue...over 100m is probably best. Bord and pillar mining operations would work here (start on shore and go from there), though the distance between the pillars needs to be left to a minimum. This does greatly impact the amount of the mineral that can be extracted, but some is better than nothing.

Something to this extent, replace coal with whatever other seam you might want: 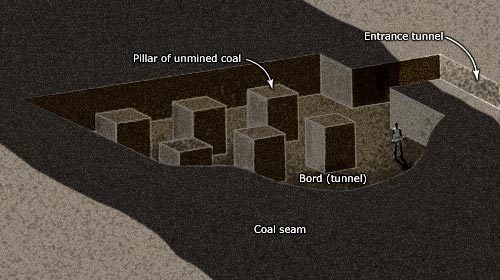 If you want some other examples...India coal operations is actually a good place to look as much of it is happening under their water ways. It's also a good example of how many casualties can come from these operations. Odds are your city will have a few memorials to the floodings of these mines and the people lost.

Mining here would require the genius if a Leonardo if it was done in any pre industrial age setting. As noted, the overburden is soft and would not provide any sort of support or "sealing" of the mine, any tunnel wold have to be essentially sealed and strengthened to prevent water from getting in and the tunnel itself from getting crushed.

It may be necessary to build cassions to protect the mining site as the mud is extracted, and now you have the extra issue of pressurizing the volume to "push" out any water that wants to seep in as the casino is driven down, as well as setting up a staging system so the miners can depressurize without getting the bends.

If the ore is valuable enough, the "simple" solution might just be to dam the river mouths that lead into the swamp and dig a channel to divert the water away. A secondary system of dams to seal off the mining site allows the water to be drained from the site, and then a massive program of digging the overburden away to the rock face allows the actual mine to be built. Since the mine is essentially in a huge hole surrounded by water, monitoring the dams and pumps would be a critical part of the mine management's job. Any failure there would allow the mine to be rapidly flooded.

Generally for mining a river bed then your best approach would be to divert the river or somehow seal off an area and pump the water out of it. If the ore is valuable enough then even a substantial amount of drainage work like that that would be worth doing.

So long as the ore is not too deep underground then a simple open cut mine would be plenty to reach it.

Alternatively just dredging the bottom could be effective, remain on the surface in boats and send down scoops and buckets to haul mud up then filter out the ore from that.

Not the answer you're looking for? Browse other questions tagged reality-check economy cities .

18
How much stuff could we get into Earth orbit for the start-up cost of initiating asteroid mining?
9
Space wizards city : Is it sustainable?
3
Creating toxic-gas-proof trade routes between cities
2
Mine easily turned into underground nuclear shelter / city
8
Geographically, how large would a very populous city during the 16th century be?
8
Hanging city on Europa, is it feasible?
9
Underwater city sanitation
19
How big could a space-ship get while still being plausible?
30
If I build a railroad around the edge of a supercontinent, will that kill the oceangoing shipping industry?
6
Underground Cities