The economics of laser sails vs fusion rockets

What would be the economic trade offs of building fusion powered rockets vs building laser relays across the solar system? What assumptions would you need for each one of these to be the superior option?

There are two different determining factors to consider here.

For any sort of rocket, even a fusion rocket, the main issue is going to be the rocket equation. Essentially, the farther or faster you want to go, the greater the fraction of the rocket becomes fuel and energy source and the smaller the fraction of cargo. Since the rocket owner is being paid to carry cargo (including people), the cost goes up with increasing distance or demands for speed, which also increases the prices which must be charged to the customers.

Fusion rockets will likely be very expensive to build and operate (think about the implications of all these devices aboard a ship with a real life "Epstein drive", for example. Fusion drive spaceships are likely to be used as "packets" to carry premium cargo rather than "tramp steamers" carrying whatever cargo the captain and crew can scrape together.

This also means they are most likely to be only found on profitable routes, so between Earth and the most densely settled planets or moons, where there is not only enough volume of cargo and traffic to warrant fusion packets, but the expectation that the docks at either end will have the technical staff, fuel and other materials needed to keep the ships in operating order and good repair. Given all the associated costs which go with the fusion ship, there will be a limited number in relative and absolute terms across the solar system, and they will only be owned by governments or large corporations capable of making the huge investments needed.

Sails have a different economic incentive: throughput. Laser sails will require one laser at each end of the trip (for acceleration and deceleration). If photonic propulsion is the chosen system, savings will be made in the size and power of the drive lasers, but there will be additional costs in the corresponding reflectors needed to "recycle" photons from the laser sail and back. This is another large fixed cost, but since the devices are essentially planted on a moon or asteroid, the cost can be amortized over tens, hundreds or even thousands of launches. 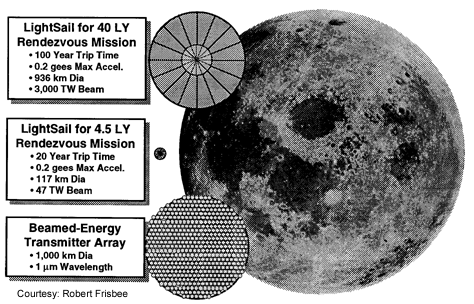 You also need to pay for all this as well...

Laser launchers have an additional advantage over a fusion packet in that they are not tied to a particular type of fuel for the reactor, but can use any energy source to power the laser. Grids of solar cells, nuclear fission reactors, fusion reactors that use different fuels than the packet's reactor or even billons of monkeys on treadmills could be conceptually used to power the laser. In a fully developed polity, the laser probably draws from a grid with multiple energy sources, and launches are scheduled to take advantage of off peak rates whenever possible. Ownership of the ships and the laser can be separate, ship owners can purchase time on the laser as needed.

So if the "throughput" is high enough, a laser system will be far more economical, and can amortize the costs over large numbers of launches. Bulk cargo can be sent since there is no "rocket equation" penalties associated with speed or distance (indeed, the velocity of the laser launches can be adjusted to reflect this as well, low cost launches using minimal energy if there is no demand for the cargo to be delivered urgently, while high amounts of energy can be delivered to priority cargos).

Overall, the photonic propulsion system provides the means for a much larger and more flexible system of transportation across the solar system.

Bigger than economics, I'd see the primary decision factor as this:

Can you trust the people you leave behind to maintain the laser array and turn it back on at the right time for your deceleration (assuming you'll use a Rocheworld style two-part sail)? I wouldn't -- if you're going to be in transit for a couple centuries, who knows if there will still even be humans back home when you need to slow down?

That leaves either decelerating the slow way, using only the light of the destination star, or taking your power plant with you, meaning fusion rockets and a good sized comet to supply fusion fuel and reaction mass. You'll cut years (decades?) off your travel time with a fusion drive, compared to microgravity deceleration under natural emission on a light sail.

As a bonus, you can take a great deal more ship than you could reasonably launch with a laser sail, and avoid leaving your home system full of immense laser cannon (this improving the odds of still being humans back home when you arrive).

It depends primarily on the payload

While the available technology will undoubtedly dictate what propulsion systems one uses, the mission will be the stronger factor. Even when fusion drives and laser beams are available, it is quite probable that they will still be outperformed economically by chemical (LOX + LH) rockets in the moon systems of the giant planets. This is just meant as a reminder that even old technology can outperform the fancy, futuristic stuff given a favorable resource situation.

For interplanetary travel, you got many options beyond laserbeam and fusion drive. Chemical, ISP-Family, Fission, Particle Beam, Electromagnetic Launcher, Trochdrives, Fusion, Light, and Lasersail would be my, most likely not comprehensive list. I'll assume that your fusion drives are economic engines, not torches.

For an economic analysis, we must, as I said consider the mission. I believe that splitting missions into bulk, value dense and express transport is sufficient. Bulk are industrial feedstocks like ore, ices and organics. Value dense includes manufactured goods, whose markets might fluctuate a bit more, so that timely delivery becomes important. Express goods would be people and military. Anything that should arrive at the destination as quickly as possible.

Efficiency and travel time are somewhat related. Fusion drives require fuel and ejection mass, but give the vessel a lot of autonomy and agency. Laser beams can circumvent the tyranny of the rocket equation, but the spacecraft loses a lot of autonomy and agency. However unless the fusion drive is incredibly efficient, even it won't give the crew as much control over their navigation as one might think. If a spacecraft has accelerated it can only change its trajectory by so much. It might perform an abort burn, but a laser craft will probably have some means of maneuvering as well. Aborting and going elsewhere or rendezvousing with a rescue mission should always be possible. The main difference is that the stations sending out the laserbeams will have a lot of control over the spacecraft's in the system. A laser sail setting will have very few unofficial spacecraft. Only big cooperations and nations will be able to maintain a laser web. If your protagonists do something in a laser sail setting that the people in power dislike, they will be in much bigger trouble than in a fusion drive setting.

A fusion drive is good for lots of things!

If you can make a laser sail, you can laser sail away, yes indeed. And you have a giant laser pointed at space that might be useful for other things. Maybe writing things on the moon.

But a big laser will never as useful as a fusion rocket! Aside from the fact that it will propel your ship no matter what is going on back home, a fusion rocket is a versatile tool. A fusion engine capable of being a rocket can be a weapon; ask the Kzin about that. But there are also prosaic workaday applications for a tractable fusion engine. It can generate electricity to purify the air and regenerate the carbon for your people on their ship. Once they get to the destination it can keep the lights on in their colony and supply the radio station with power. Also desalinate the water and produce fertilizer from the air. Maybe even fly your DeLorean!

Not the answer you're looking for? Browse other questions tagged economy space-travel .

3
Creating toxic-gas-proof trade routes between cities
4
How big would a fusion reactor need to be to produce a constant triple digit terawattage?
16
A clock for interplanetary travel
7
Is this a plausible interstellar propulsion system?
8
What is the most plausible way to lower cost to orbit?
3
Is delta v relevant for interstellar travel for generation ship?