How would one detect a black hole when there are no more light sources for it to refract?

The universe as we know it has ended. The concept of “natural” illumination ended when the last red dwarves and quasars died out. Now, only brown dwarves and blackholes dot the empty void that was once the universe.

Life, still exists! Though, only in big self-sustaining space stations that are running out of fusion fuel. These space stations drift through the void, blindly grasping through the darkness, collecting every atom of hydrogen they could find.

Every now and then, these stations send out manned spaceships capable of FTL. Their mission is to find the few pockets of hydrogen to power their space stations.

Their FTL, isn’t really FTL. It’s more like moving at “normal” speeds (Normal as in .20c). The way it works, is it “folds” the local space-time so the distance they have to travel is much shorter, giving the effect of moving faster than light.

The remaining bits of hydrogen is usually found near blackholes, their gravity-well actually collects them over vast distances. The problem is; There’s literally no point of reference. Since there’s no light, there’s also no way of knowing that a blackhole is there.

Another species however, the Humans, need a blackhole for another reason. These plucky little humans, they made up a competition of who can survive the longest. They went and built a station and filled it up with the best of humanity. Once complete, they want to toss it to within the event horizon of a supermassive black hole. (What they don’t know however is that a new universe is coming, they just need to last long enough, so yay!)

You can very easily detect the presence of a black hole by its gravity. Have an array of sensors deployed in a cubic configuration for redundancy, and measure acceleration in all eight points. That will give you the exact position, distance and mass estimate for the black hole.

(Acceleration cannot be told apart from gravity in a single point, but experiments can be designed to tell them apart if more than, if I remember correctly, three non-aligned points are involved).

Folks have suggested Hawking radiation; I don't think that's a particularly good idea. If you run the numbers, a black hole would need to have a mass of $M\sim10^3\text{ kg}$ before it reached a luminosity of $1L_{\odot}$, and would have only about 10 nanoseconds before it finally evaporated. If you're okay with a dimmer source - say, $0.0001L_{\odot}$ - then you've got about 9 milliseconds, which still isn't much. Any black hole luminous enough for you to effectively detect from interstellar distances won't live long enough for you to manipulate it.

However, you can still use a twist on the idea microlensing. This is a technique used to find dim, compact objects and exoplanets (though it's increasingly found more use when it comes to exoplanets than when it comes to black hole detection!). If you have a dim object in front of you, and there's a light source behind it, the foreground object will bend the light from the background source. This should be detectable, provided the foreground object is within the galaxy and provided you get the timing just right. In your universe, the lensing object can be one of these stellar-mass black holes wandering around. They can act as lenses while still having plenty of time to go before that evaporate.

Finding a black hole is tricky. It might be easier to find two black holes. 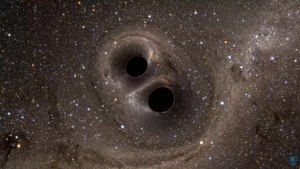 For many years, proving the existence of binary black holes was made difficult because of the nature of black holes themselves, and the limited means of detection available. However, in the event that a pair of black holes were to merge, an immense amount of energy should be given off as gravitational waves, with distinctive waveforms that can be calculated using general relativity...

Binary black holes or any asymmetric rotating object will give off gravitational waves, or gravitational radiation. You can use that radiation to find the site of the black hole binary generating it. The most radiation is given off when they merge but the precursor to merger should also give off detectable amounts.

If one black hole has accumulated hydrogen, two should have even more!

The closer an observer is to a gravitational body, the slower they experience time with reference to an observer that is further away. For example, here's a graph that shows the effects of time dilation on satellites orbiting the earth, with the blue line showing the effects of the Earth's gravity on time dilation. By having a sufficiently long ship, and placing an atomic clock at each end (or placing one of the clocks on a very long rod that sticks out from the front of the ship), comparisons can be made between the rates at which they run to determine if you're getting closer to or further from a large gravitational body. The longer your ship/rod is, the stronger the effect will be. Getting closer to the black hole will also have the same effect of increasing the time dilation. While this may not help you find a black hole a very long distance away (as there will be effectively no measurable time dilation), it will help warn you if you're flying directly at one.

Gravity produces acceleration. If you detect a suspicious source of acceleration that shouldn't be there, you have your answer.

Not the answer you're looking for? Browse other questions tagged science-fiction space space-travel spaceships black-holes or ask your own question.