An Aztec ship sails east - where does it land?

He sets sail from Haiti, the latest Aztec tributary. The season is undetermined. He has no knowledge of what he'll find on the other side, other than vague records of mythical place called Hindustan.

Where will he land?

Both the prevailing winds and the ocean currents (gyres) suggest a somewhat northerly course to be "ideal"; going parallel to the North American coast for a bit and ending up in Europe.

But if you look at Columbus' travels, and specifically the return trips, only on his first journey does he curve northward significantly before heading east, and it looks like he was specifically aiming for the Azores that time. So it is definitely not against the laws of physics to sail a straight eastbound path, which would have our brave Aztec land in Cape Verde or Mauritania.

So I wonder if there's an argument to be made that given a sailor with a suitable vessel but little knowledge of the deep ocean (just like Columbus) and no known destination to aim for, that a spot on the Atlantic coast from Senegal to Portugal is most likely to be hit?

Or are those prevailing winds/currents so strong and noticeable that any reasonable sailor encountering them for the first time would be compelled to adopt a more northerly course, and end up somewhere between Tanger and Scotland?

Or is it all so dependent on the season and weather conditions of the time that any destination between those northern and southern extremes is at least plausible?

So I did some more research and I made a map. 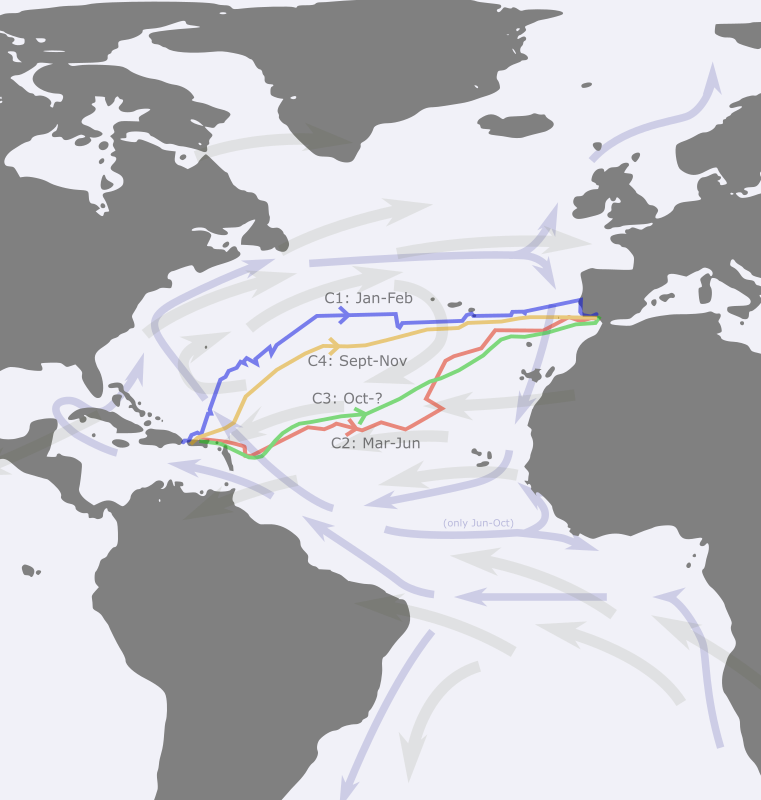 Fat arrows are winds, thinner arrows are ocean streams (of which the equatorial counter-current is only active in the late summer and autumn, apparently). The lines are all the west-east Atlantic crossings I could find the routes and dates for; just Columbus' four journeys. Don't really know where else to look.

It's... not that helpful in the end. Columbus crossed the Atlantic in basically every season, and he only followed the currents or winds twice.

Safe to say that I'm starting to lean towards any landing site for my Nahuatls to be plausible. If Columbus could take those routes in spite of wind and currents, couldn't my expedition do the same?

They would sail straight east and end up on the coast of Africa between Cape Verde and the Canary Islands.

They do not know the winds, the currents, or the geography on the other side. And more importantly, most importantly for your question, they know the do not know. They have no specific goal they can aim for.

With the navigation available to them this means they can only sail along the coast, north or south to reach a latitude, or east or west along the latitude. Sailing east along the latitude of their origin is the only one of these options that is useful for the initial crossing towards the old world.

You'll note that when Columbus went to Americas he first sailed to the Canary Island the westernmost Spanish holding and then sailed straight west along the latitude. On his return trip he went first north then north-east until he reached the latitude of his destination then straight east.

Later trips when he was more confident on the distances and had specific goals in the new world the routes become more precise and less angular because he, and your Aztecs, would have fair ability to estimate the distances sailed.

You cannot do this on the first trip over so it is not really relevant to the question but it is useful to note that on his first return trip Columbus was already confident he can sail north-east part of the way and that on his second return he already hits Spanish territory instead of Portugal. And felt confident to cross to west south of his initial trip to more or less continue his exploration where it ended on the first trip. (And knew which direction to go when he found islands.)

If you want them to sail straight to Europe.

Have the trade from China come via Japan and let your Aztecs know its latitude but nothing else about the geography. They would then start by sailing north along the coast to that latitude, then sail straight east. They'd probably end up somewhere in Iberia or France in this scenario.

And obviously knowing or guessing the latitude of part of China or Korea on that same latitude is just as good and Japan is just an example. I have no idea what port the Chinese would use.

The north-northeastern route would probably be the easiest, especially if we're assuming the ship's navigators are roughly as skilled as those on the Santa Maria, et al. This would take the ship, ultimately, to either the Iberian peninsula, or the British Isles, depending on whether the ship ended up following the Canary or Norwegian current, respectively. However, this also puts the ship at the mercy of North Atlantic storms, which, given the Aztec's unfamiliarity with such weather, might be a serious problem for the mariners (this is assuming the Aztecs haven't expanded further north than, say, the Carolinas, which seems unlikely given that Haiti is their newest tributary). Depending on the time of year they set sail, it's a roll of the dice whether they land at all.

However, there is a safer, and potentially more lucrative option (though the mariners wouldn't know it when they set out), it just requires a little more navigational acumen and seamanship. Polynesians sailors developed a method of sailing in which they would actually sail against the prevailing winds and currents, which meant that if they became lost, they could just grab the prevailing winds and sail back where they'd come from, almost like a kind of navigational save point. If your Aztecs developed this technique (maybe they got as far south as Peru, either conquering or trading with the Incas, and learned the technique from Polynesian sailors there), then they could sail "backwards" along the Atlantic North Equatorial Current, and end up in west Africa. Now, circa 1492, this brings them to the west African shores right around the time that the Songhai Empire is reaching its height. This could introduce your Aztecs to the pan-Islamic trade network, which would, in this writer's opinion, be of far more economic and cultural value to them than introduction to European Christendom circa 1492.

First of all Columbus knew where he is aiming for. Or at least he knew how the sky should look like there. All he needed was to close the sky map of stars. So that's why the first travel TO was in a rather straight line. They had to keep some sort of regularity while charting. So they used Sun as a reference point.
During their way back and other ones they have a rather good idea of what they need to look for in the sky to get back in both directions and that they have enouch "anchor" points to get to place where they want to land.

The thing is that distance from China to Americas is much greater than from South America (especially from Rio Grande Do norte) to Europe or Africa. A seasoned (or just knowledgeable) sailor should know about equatorial countercurrent. And they could try to find exactly the same thing on the other side of America. Landing in african congo Basin Area. They would also prepare for a much longer voyage then it would really be needed. Again, because the distance on Pacific is much greter than on Atlantic.

Also remeber that Columbus knew where he wanted to land in China/India. You have two set points, you have refrence (sun) and you have, let's say assumed knolwedge of 75% of sky above you. You know the earth is round. So you make the route the way you want.

Until the Atlantic currents were understood (well after regular trading voyages were set up between Europe and the Americas), Captains would just try to set a course to their destination and then use the winds as they could to get there.

Eventually it was noticed that voyages going to America across the northern Atlantic would take considerably longer than those on a more southern course.

So courses that are going against the currents are not impossible, but they will make the voyage much longer.

If we are talking wind-driven ships I would most definitely recommend a somewhat north-heavy route leading to somewhere between Ireland and northern Portugal. It is technically possible to go east directly from Haiti, but I don't think it reasonable to oppose both wind and water currents for no real reason, any sane sailor would understand that following those would bring you forward much faster.

Not the answer you're looking for? Browse other questions tagged ocean ships navigation currents age-of-sail .

13
How to teach the Mesoamericans seafaring?
7
What Point(s) of Departure Would the Native Americans Need to Sail Across the Atlantic and Colonize Europe?

36
Nuclear apocalypse in a nuclear submarine
6
Sea Travel Variables
12
How would a sailing ship travel on land?
24
Is it possible to bind multiple ships together on open water?
3
Are the ocean currents and climate zones of my world plausible?
13
How to teach the Mesoamericans seafaring?
4
Are my ocean currents passable?
17
A Sailing Ship With Cylindrical Sails