How could an iceberg be created quickly?

For my middle-grade science-fiction novel, I need to come up with an invention or chemical that could rapidly create icebergs to refreeze the Arctic and slow climate change. Kurt Vonnegut's Ice-9 is tempting to use, but this possibility has been debunked too many times by critics. Would any other seed crystal work? Thanks!

Well, the best way to get something to cool down is to not heat it up. The sea ice in the Arctic already melts and refreezes seasonally, so all you need to do is prevent the ice from melting in the spring and summer. There are two sources of energy for the Arctic: the sun, and warmer water from equatorial regions.

This is simple. You just need a lot of white, reflective stuff on top of the water. I'd recommend something that will break down into something safe quickly (about six months, probably) in Arctic conditions. Claim it's some sort of paper, and make a lot of paper boats. These will substitute for ice until it's cold enough for more ice to freeze, if you deploy them in the spring. 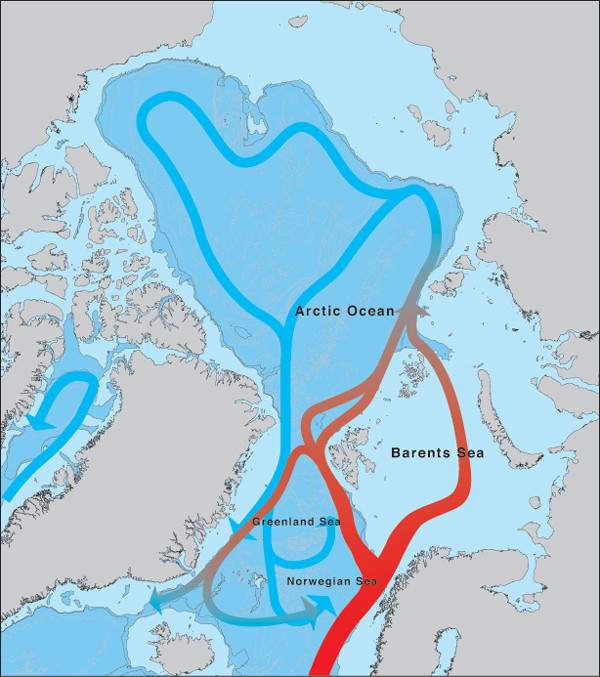 (From the Norwegian Polar Institute)

Well there's your problem. You've got warm water coming up in the form of the gulf stream. There's also some from the Bering Strait and from Canadian and Russian rivers, but it's mainly the gulf stream. You've got to figure out where you're putting that, and where you can move it without screwing up things even worse.

As for deflecting the gulf stream, that will probably be the world's largest engineering project. That's a lot of water and energy you're trying to redirect. This makes every canal ever built, combined, look like a child digging a hole at the beach.

The Gulf Stream transports nearly four billion cubic feet of water per second, an amount greater than that carried by all of the world's rivers combined.

Have a structure on surface which compresses the air. Make the compressed air go thru an heat exchanger to get rid of the heating from compression. Then have a pipe that goes sufficiently deep underwater and preferably also some distance off your structure. Let the compressed air bubble up.

When the bubbles come up they will expand and absorb heat from the water which is then lost into the atmosphere when the bubbles reach the surface. This circumvents the protection water gets from ice and freezing water forming a protective cover and makes it cool much faster and more efficiently. Which should result in faster and more efficient freezing and icing over.

Your goals do not seem to require actual icebergs just covering the sea in ice, so I skipped the part where the ice would form icebergs. Although that should be a natural consequence if the sea ice gets thick enough and my suggestion makes the ice thicken much faster. Normally the ice insulates the water under it.

Not the answer you're looking for? Browse other questions tagged science-based technology physics chemistry or ask your own question.

16
How could a Great Chasm be created?
9
How do puffer lizards puff up into flight so quickly?
4
Making a medieval smoke bomb, quickly and reasonably
30
How could indestructible materials be used in power generation?
6
How could a small civilization move about normally, tactically, and quickly in a large swamp?
1
Hidden specks will blow up the world if overheated: how bad a thing is this?
9
Substance that changes quickly from liquid/gelatinous to solid?
14
How to cool a room without a place to dump the heat