Could my Triclops exist?

Around 5 million years ago, a group of primates diverged from early Baboon ancestors migrated into Sicily becoming Triclopes (here's a rough mock up of what a Triclops skull might look like): 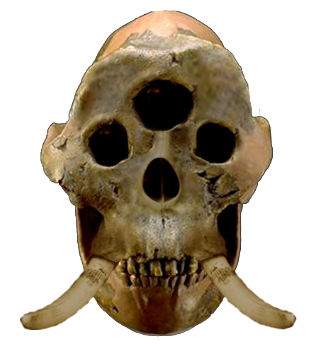 some basic characteristics of these Triclopes include:

Given these characteristics, could such a creature realistically exist, and what evolutionary pressures would lead to them? Magic does not exist in my story.

I know this question was originally about cyclopes but after some reconsideration I've decided to change it. I hope it doesn't affect things to much.

Yeah, in all honesty, cyclops as a whole are unlikely. You see, evolution favors traits that either allow you to survive better or allow you to reproduce better. And I doubt any kind of sexual selection would ever favor an eye over two. Not only you'd be reducing decently the creature's field of vision, they'd loose the ability to perceive depth, which is especially important for predators that rely on vision. It would also require for the single eye socket to be moved to the center of the face if you want symmetry and to maximize the field of vision on the front of the creature. It might be easier to simply remove both eyes altogether, or have something like 3 eyes.

Sorry, but basically it'd be easier for a creature to develop all of your other traits at once than for it to develop a single eye. I'd suggest having hippo tusks over an elephant's, unless it doesn't use its mouth to bite down on prey. Also your creature will need a decent enough ability with tool making to survive without nails, kinda like we did.

So, summing up, except for the single eye part, there's nothing too bad with your creature. It will likely inhabit more extreme climates to need such thick skin, most likely mildly colder regions to need that extra fur we lack and the tusks, in case they somehow don't interfere in hunting or feeding, are likely used during mating season and could develop as a sign of superiority among the species. But the eyes, just add one more, reptiles have rudimentary third eyes, so it's not impossible your animal once did too and it evolved into a more complex eye. it'll be much easier to evolve than it having a single eye and being viable as a hunter, unless they have something like a very, very specific case of polycoria and an incredibly large eye, and even that is way more unlikely to work out than simply sacrificing the eyes and relying on sound and smell to navigate.

6
Could a tetrapod Pegasus exist?
1
Could my Bicorn exist?
2
Could my Sirens exist?
7
Could my Ents exist?
0
Could my Cipactlis exist?
4
Could my Kangaroo-Monkeys exist?