How can my vampires hide in public?

So, my vampires are somewhat different. Here's a short summary, though it might be a lot to take in:

Vampires are created from humans by malfunctioning robotic headcrab masks. Vampires' original purpose was to be perfect soldiers, and so they possess biological immortality, perfect regeneration (no scars, regrow limbs) and peak-human physical characteristics. However, they have to eat a lot (though a lot less compared to what they can do) and can't be in the sunlight for too long without becoming significantly weakened and also risking super cancer, thanks to the designers who scrapped melanin (making vampires look albino pale) because it was "bloat" and made the synthesis of Vitamin D harder. Garlic and garlic bread works against vampires because their noses are hypersensitive.

The weak-to-sunlight thing doesn't matter for soldiers in skintight leather suits (Don't ask!), but there's this poor rich aristocrat girl (16) who just saw her parents and herself getting murdered and only survived because the blood and viscera sprayed everywhere, including the mask (tacky prop at the time).

Edit: The aforementioned mask is capable of locomotion (think of a really scary bug). It seeks out human targets and latches onto their face. Then, it wraps its legs around the head and with the help of hundreds of needles, injects nanomachines directly into the brain. These machines are responsible for turning the human into a vampire. The process finishes during nighttime and can't be reverted.

Once finished, the mask detaches and crawls away, seeking out new candidates.

And just to be clear, the masks are ancient technology if their perverted creator and being mistaken for a tacky prop wasn't a telling sign.

What is she supposed to do when Van Hellsing comes into town? "Oh don't look at me like that, I'm just your average aristocrat orphan who miraculously survived being stabbed in the chest (53 times) with a hunting knife and since then, is wearing a sombrero whenever going outside."

Sure, you probably feel sorry for a nice young lady who just lost her entire family and was non-consensually turned into Bella Swan; Hellsing doesn't.

So, aristocracy seems to be the most targeted group. A vampire usually can only rely on themselves, and we're in the Edwardian era. Also, there's Hellsing and his lackeys, who know what to look for and are above the law and money.

How can an aristocrat, who became a vampire against their will, disguise themselves when walking among humans without risking being caught?

She's an aristocrat and the only surviving scion of an aristocratic family. It's probably safe to say that she's pretty well-off.

So she can have whatever eccentricities she wants. If she wants to sleep all day and party in the evening, she can do that, and she doesn't need to go out in public in daytime because she's tired of people recognizing her with pity in their eyes or the paparazzi hounding her when the light's good.

Makeup deals with pallor, and if you're going to dance clubs, heavy makeup seems apropos.

Fake Her Own Death

If she's the sole survivor of an attack and became a vampire against her will, that carries a significant about of trauma with it. Enough trauma that a suicide would be believable. Her best shot at dodging the vampire hunter is to admit that she's a vampire to everyone in her town, declare that she's killing herself out of grief, and then promptly locking herself in her mansion and then lighting the whole thing on fire in broad daylight.

How she escapes dying from that is her problem, although I can think of numerous ways including secret passages, wells, or body doubles. Hellsing might be suspicious, sure, but vampire hunters have better things to do than going after a 16-year-old who's probably dead in the form of other vampires who definitely aren't dead.

At this point, the aristocrat enacts stage two of her plan. She flees to the largest city she can find, hoping to get lost there, and uses the remains of her family's fortune to do so. It's probably a good idea to use untraceable forms of money, like cash or gold, melted down, for this. Then, using makeup, she disguises herself by darkening her skin and gives herself a wicked burn scar across half her face, which she conceals in a hood. Now she's safe and untraceable, and she has an excuse for wearing a hood all the time.

I don't have any suggestions for diet, regeneration, or pallor. However, your joke about always wearing a sombrero isn't far off. Feminine fashion of the era would actually shield a vampire from the sun quite well. Large sun-hats were all the rage, and showing too much skin was still frowned upon.

Example from a 1911 Punch cartoon: 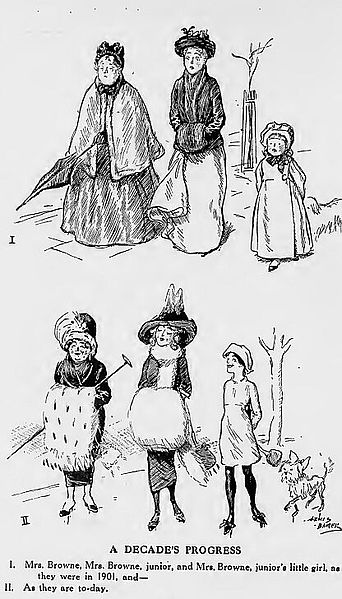 Back in the Victorian and Edwardian eras, England was still semi-feudal. As a result, you had a huge amount of nobility who didn't really do anything except sit around.

Since paparazzi was still a thing back then, a lot of these nobles were recluses; they had big estates which they practically never left, having their servants take care of things like grocery shopping. The upshot is that a young noblewoman who never left her estate would not be particularly unusual.

It appears that Solar Urticaria, a condition which causes severe rashes upon exposure to sunlight, was first discovered in 1904, which means that this was a known, if new, condition to have during the time period in which your story was set.

This means that, if one were to claim that the sun had an ill impact on their health, it's plausible that this is a story that could hold up to interrogation.

Being generally pale fits with general prejudicial assumptions about people who are ill, or have a 'condition,' and so wouldn't stand out if you could sell the first bit.

Being ill also excuses you from most social obligations, and generally at the time it would not at all be amiss that someone who was suffering from some chronic 'condition' would spend most of their time indoors, and come out only rarely at odd hours.

If there is a literal Vampire Hunter looking specifically for an aversion to sunlight, individuals claiming this specific condition would be an obvious thing to look for, however, you could probably sell a vague and unspecified illness as a reason for being a social recluse without raising to many eyebrows.

Make the mask removable. Sure her metabolism, strength and speed all revert to human-level when she is not wearing it, and she can't digest blood without its help, but as long as she wears it for a few hours every day, she can survive for intervals without it. Also, make it the mask which is sensitive to sunlight. Direct exposure to UV disrupts the delicate mechanism which then takes days to repair itself. When a mask is exposed to UV light, the vampire looses their abilities and will probably starve to death before it recovers, but they themselves can be exposed to sunlight without negative consequence.

With those changes to your definition of vampirism, your survivor can follow @Jdunlop's answer and pass for a regular, annoying human teenager.

Form a society. Basically, if you have a lot of vampires, they are going to go where food is. And most of the food will be in populated cities. Which means they might group up and start talking about what's best for survival. You say that a vampire can only rely on themselves. I say, that doesn't actually jive with the Edwardian Era. Even IF a lone vampire is unaware of it, I would think the smart ones had already done this, and it would be a help to a lone vamp, whether they knew it or not!

If it were me, the first, and stupidist thing I would do is this:

Control Fashion In the Edwardian era people wore a lot of clothes ANYWAY. It wouldn't take much to tweak that. I would be looking for fashion influencers (fashion "plates" had become a thing by this time) to either turn, pay off, or enchant. Fashion is more than clothes--it's also skin and hair care. If pale is fashionable for men and women (which, coming off of the Victorian age it WAS) it wouldn't take much to push that up to 11. Since your helmets seem to be targeting the aristocracy anyway, they are, in fact ALREADY going for some of the major influencers of the day. If everyone is using pale-faced make up and avoiding the sun, well, it's hard to tell the difference between the real and the simply fashionable.

I have one word for you: tuberculosis.

Just before the Edwardian Era, it was this disease that defined romance and fashion. There is a TON of info on how this influenced fashion and beauty. Being pale, looking consumptive, uh, for some reason, this was a positive. So look into that (there's a lot of material out there on this phenomenon) and apply it to what you are doing.

Cities already have more of it than the country so...directly or indirectly, encourage this sort of thing.

Look After Your Own

There's Van Hellsing, and then there's you, the Vampire Collector. You've been assigned to track the helmets (trapping them if possible, because the more of you there are the more likely the PR will be bad) and find newbies who you either kill (because they aren't dealing with it well and are causing a fuss) or who you teach and hand over to a city.

There is a TON more that I would do, but...just looking at the way the world worked at the time. (I know your world is... uh...different because the tech level is far beyond Edwardian, so I don't know how much this would apply, but...yep).

Run an import business based around live animals

This could be exotic pets, or livestock, or ... well, exotic livestock. Bush meat. Anything your super-soldier has a taste for.

If you need the owner of the business to hide from the sun, well, make them slightly fierce creatures. Perhaps your alternate world has gryphons (ten inches tall, but wicked claws), phœnices (fiery temper) or cats (you know what those are, we have them here, for real). Thus the keeper has to wear a lot of ... protective ... clothing.

If anyone comes too inquisitively into the area, quarantine becomes a potential excuse for not coming too close.

Not the answer you're looking for? Browse other questions tagged science-based clothing vampires .

8
How can vampire-dad be popular when he has to stay inside during the day?
20
If vampires existed in modern society, how could they not be well known by science and the public
11
Can my vampires evolve black sclera?
6
How Can Vampires Obtain Donors?
2
Hiding Vampires In Plain Sight
5
How can ungulate humanoids conceal their weird legs in public?
4
Vampires getting away with ritual murder