How could a person correct their vision with limited technology?

I'm brainstorming a character (human) and I was thinking about how they would correct their vision if they were short/long-sighted. I would assume that the poorer people would just deal with their bad vision for the whole of their lives, but what about the rich? My character is a prince so would have access to anything he wanted. Yet it's set in a medieval-like world. What kind of ways were there to correct vision, if anything?

Eye glasses, just as we use today

They had eye glasses in the Middle Ages. Here is a 14th century picture of the 13th century cardinal Hugh of Saint Cher wearing eye glasses: 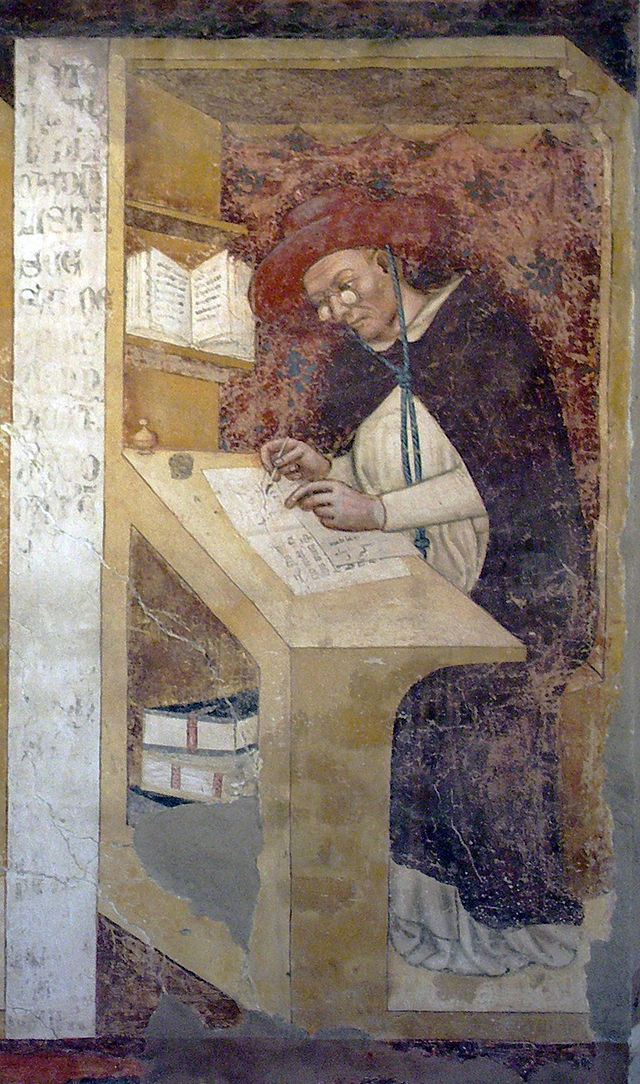 Cardinal Hugh of Saint Cher (1200-1263), wearing eye glasses. Portrait from the monastery of Saint Nicholas, Treviso, 1352. One of the oldest depictions of a person wearing eye glasses. Photograph by Risorto Celebrano, available on Wikimedia under the Creative Commons Attribution-Share Alike 3.0 Unported license.

Medieval eye glasses were of the "pince-nez" type; our more common type with temples which hook on the ears became common in the Renaissance.

By the 14th century eye glasses had become sufficiently common so that, for example, Francesco Petrarca could boast in a letter that he had had no need for eye glasses before the age of 60, showing that he expected the readers to be aware that older people needed eye glasses.

He could wear "glasses" that work by using slits or holes through an opaque material.

Quite feasible given your level of technology is a device called ilgaak, which as you can see, is a pair of slit goggles. Having no way of making clear lenses, the Inuit did the next best thing, which was to make use of the pinhole effect. Ilgaak serve as snow goggles, the narrow slit keeping snow and wind out of the eyes, and help clarify vision by darkening the inner surface and only allowing vision through a very thin opening. 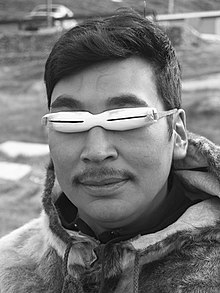 A more conventional device would be the stenopeic glasse, which as you can see, also operate on the pinhole effect. Visual acuity is (slightly) improved and is well within the technological capabilities of your culture. 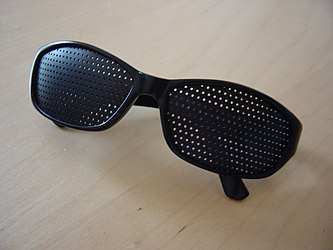 There is also the best of both worlds, the pinhole spectacle. Inuit design meets Spanish cool in the antojos of Daza de Valdés. His spectacles are composed to two opaque "lenses" with horizontal pinholes drilled through the matrix, all set into a standard spectacles frame. This article describes the effect and uses in more detail.

He can just use glasses.

Ptolemy (c. 100-170 CE) described the use of convex lenses for magnification. Reading stones were in use in Europe around 1000. Eyeglasses were being made in Northern Italy by around 1290: a sermon in 1306 mentioned it hadn't yet been 20 years since eyeglasses were invented.

Given that glass was in widespread production and use in the Roman Empire, and had been produced by humans for a few thousand years at that point, it's simple to imagine some bright spark fooling around with lenses and realizing that if you took a pair of small ones and mounted them in front of the eyes, you could help people with poor vision. Technologically, all you need is the ability to make clear glass and then grind and polish it into a lens, and skill in fine metalwork to make some sort of frame. There's no particular reason why the Romans couldn't have done it, which means there's no reason why they couldn't be available in a medieval world with similar technology.

Maybe goggles filled with a liquid. If the refractive index of the liquid was carefully chosen it could compensate for the eye's focal length. This could work because the cornea accounts for approximately two-thirds of the eye's total optical power.

Not the answer you're looking for? Browse other questions tagged humans medieval or ask your own question.

30
Does living without access to sunlight for extended periods have known physical or psychological effects on humans?
4
Is it possible to carve caves in a dormant/extinct volcano?
1
How effective is magically inflamed food in a fight against medieval guards?
60
Modern warfare theory in a medieval setting
6
How to travel between “Little Prince” style planets without high technology?
3
How to found a new independent city-state in a medieval setting?
18
What kind of materials could be made with immense heat, that weren't available in a typical Medieval setting?