I want to have air transport as the dominant means of public transportation in my fictional city. But how would such a system operate to handle many commuters with maximum efficiency? Specifically I'm asking about the topological structure of the system, like how the lines are organized. For example:

There are other important details like operating speed, capacity and frequency of each aircraft. But I won't require answers to that for fear of being unfocused (but you are welcomed to answer!).

The aircraft could take off vertically, if necessary. And boarding should take as much time as boarding the subway.

And some background info about the city: The city (consisting of 3 urban hubs bunched together geologically) is in modern Japan style, and it spreads across about 25 km (15.5 miles, greater suburb) of coast, with a peninsula and a mountain range that elevates to approximately 500 m (1640 feet) in the middle. The rest of land isn't too flat either, but for some reason it is still fairly densely populated.

I'm no native speaker of English, so pardon me if I made any mistake.

Edit: As requested I uploaded the map of my city. 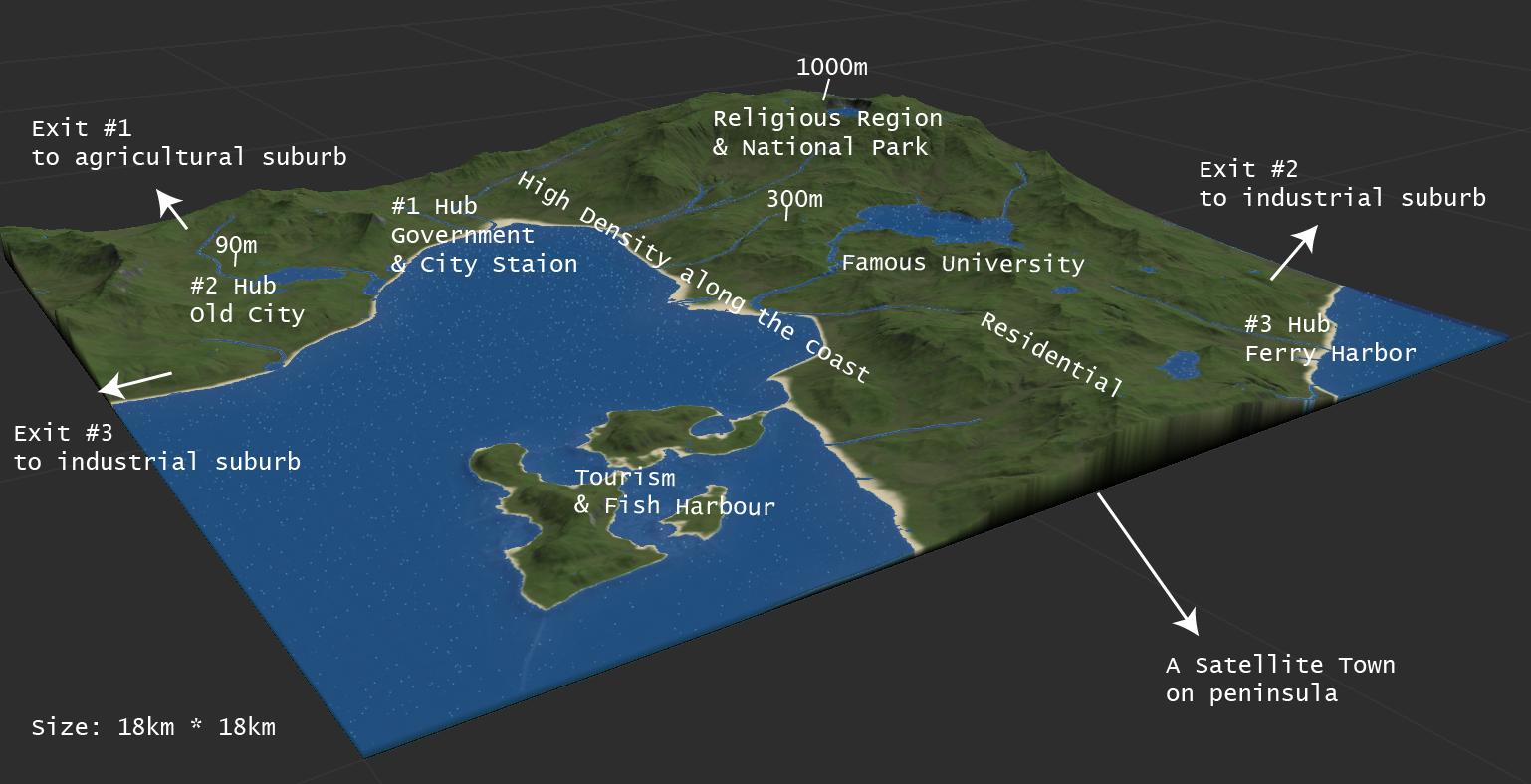 I propose that you have a dense city with considerable local political clout, and a narrow road system laid out in a different age. The geology makes subterranean travel impractical. There is too much resistance to an elevated train system which would depress property values along its route.

Your flight system will be the equivalent of a subway / commuter train system. Just as I would not own a car in New York, cars are cumbersome and impractical in your city. I would get close and walk or scooter or hail a rickshaw. This is all pretty obvious.

Less obvious is that you should have flight corridors. It is dangerous to have large machines flying over schools and homes many times a day,. Each time is a roll of the dice. Flight corridors should be areas which are either unusable for buildings (I suspect that the hills in "residential area" leading up to the university might be such) or over water, which is easy given the extensive coast. Or they can be dedicated natural areas which would be pretty too. Your air trains move over these areas to minimize the chance of casualties if there is a mechanical failure.

Different distances will correspond to different altitudes. The short hop air train along the coast will be close to the water. Longer hops will be higher and the cross-bay train will be the highest.

The reason you don't see many air-based transportation in modern cities is simply because it is impractical. Ground transportation is simply much faster for short distances, and much cheaper (uses much less fuel, and it doesn't cost quite as much to train people to drive those vehicles).

I think a better starting point would be to come up with reasons why the city has air-based transportation as opposed to a terrestrial network(that is, if you're aiming for a great deal of accuracy and realism). Maybe the ground is extremely polluted outside of small pockets, or your "city" is actually a collection of urban spots on mountain tops.

If the technology is sufficiently advanced in your city, your system could simply be something like an automated airborne taxi service, where riders can determine the landing point without any regard for pre-established points like bus stops or train stations. A centralized computer can keep track of the locations of each "taxi" and calculate their paths according to avoid mid-air collisions.

As for your English, it is very good! I had no problems understanding it.

It is not that hard. It is even achievable with our modern technology. But it is a lot more expensive than ground transport.

Firstly - all flying vehicles should be strictly robotic. There aren't as many obstacles in sky as there are on the ground. And we cannot trust human skills with such massive plane/copter usage. Some emergency vehicles (police, military, medievacs) should have semi-robotic controls (i.e. just telling robot with a move of a stick to go left/right, ascend/descend, but it is robot who perfomes the actual manoeuvres). Any electronics failure results in emergency parachute deployment (also can be done manually by an "emergency brake" button) with lights and beepers to warn people on the ground. Thus flying should not be perfomed on a high speeds - no more than 200-300 km/h and is forbidden above some sensative areas (mostly industry).

Secondly - all air traffic should be remotely and automatically controlled by a hierarchy of local/global computer dispatch systems (under supervision from human specialists). Loss of connection to the dispatch system should lead to automatic immediate landing on any nearby free landing pad. It is like obligatory "google navigator" where you are not allowed to "go off route".

So for common people it's more like a robotic flying "uber" service (even if you own a vehicle). There would not be any "busses". For average craft - no more than six persons without baggage, or 500kg of total load per vehicle (crafts for 2 or 1 persons would be more common than on land). There would be special flying vehicles able to lift up to 2-5t, but they would be rare and would be used only by organizations for express deliveres.

The main problem with such transports is cost. It requires from 2 to 10 times more energy (and thus money) per person (per kg) per kilometer on short distances. Mostly because 50-80% of that energy goes for takeoff and landing. And flying cars by themselves are 2-10 times more pricely than ground cars of the same carrying capacity. This increase the costs by a factor of 4-100 and is one of two main reasons why we have no such system now (second is fear of them falling on your head, especially during a sudden storm).

As for topology - we are in 3D space! We don't need any "topology"! We can fly in an almost straight line from landing pad (zone) to landing pad (zone) . Our only concern is the availability of a landig pad we are going to. That's exactly why we need automatic dispatchers (humans would have troubles to handle this mess) and robots (to stricly follow any commands, without "I do need land here and now! Let me talk to your boss!" stuff). Reservation, optimisation, fast reorganization and so on - would be everyday routine of this systems.

Of course there would be massive "central hubs" near trading and business centers and small, single-crafts pads in rural areas. There would be VIP crafts, wich would cancel "landing reservations" for commoners and reroute them to nearby landing pads. There would be "waiting zones" - were this aircrafts would circle around in air analog of traffic jam, awaiting their turn to land. But this is more "logical topology" than physical one.

This "logical topology" would be more or less chaotic all-to-all net. It just little sense to have something more restricting - flying crafts would lose their single major advantage over land ones.

But even the airspace might end up being very crowded, constrained between high rises and full of vertical corridors to let a huge amount of people to get in/off the system. The horizontal lanes would be divided in a big number of levels, the lower level might be reserved for multi-passenger crafts, the equivalent of today buses, the level immediately above might be reserved for short distance travels and the travel distance would increase with the height of the level.

As other pointed out the main problem would be energy. It would require a lot of energy. But another problem might be flexibility. Stopping everything in midair might be dangerous, to avoid traffic jams every travel should be planned and communicated in advance, changing the schedule, stopping five minutes somewhere to chat with a friend or to collect something would be difficult, in this way the ultra modern transport system might revive the love for walking.

Another detail. Such a system would be expensive, but the council couldn't put high taxes on it to allow access to all the citizens. To recover some funds above all the horizontal levels there could be a couple of levels reserved for people paying a higher tax. So rich people could get out of the crowd, but for a hefty sum.

Not the answer you're looking for? Browse other questions tagged science-based cities transportation aircraft .

11
How many Sovjet Era transport planes would be required to transport 30'000 Rhinocerotidae to the southern US border unnoticed?
7
Small-scale aviation without fossil fuels
7
Making airships\blimps\dirigibles the dominant form of air transport
10
Black powder machine gun in an airplane
9
Algorithm or tool to design a worldwide subway transit map?
8
Euro-American Maglev Railway - Transit without stopping
4
21st Century Intracity Train Design with These Races
26
Could a natural disaster completely isolate a large city in the modern world without destroying it?
4
What issues could multiple lanes of travel in the air pose in a city?
0
What would need to change to make living comfortable in a world with limited cars?