How would evolution be influenced by the remnants of humanities servant robots?

So let me explain the frame/world first, I actually think all of it is relevant as some details would probably have quite the impact on the outcome. I was hesitant to post the question as it's quite a long read and I tried many variants on a TL;DR but couldn't quite condense it down to my liking (there still one at the end):

It's the year XX and humanity has advanced to a type 2 civilization on the Kardashev scale. Humanity went through quite a lot during that time... unending tragedy and suffering to the individual but humanity as a whole lived on (as it did always). A Dyson sphere provides energy and materials from within our solar system can be gathered and used. In this post-scarcity world, society has changed a lot. There are far fewer people alive (population slowly dwindled). Values have changed, everybody is in tip-top shape thanks to genetic engineering there are no environmental problems any longer.

Everybody lives in lavish mansions, very close and connected to nature. Parties are everywhere and can last up to many weeks (average lifespan is ~700 at this point). Weddings, childbirth, and death (although rare) are celebrated in a ridiculous extravagant fashion. Society values are: to not impact the environment and 'perfection' which everybody tries to strive for. As nobody needs to work anymore everybody can focus on hobbies, gaming, art or advancing the various systems in place that make the way of life possible.

This automated system includes mining robots, factory robots, etc. everything can be replaced, created and repaired automatically. There is no AI in place as it got out of control at one point in the past and humanity almost lost that war, now basically illegal (if used it has to be restricted quite a lot). Food is grown in automated farms. Processed and cooked on a daily basis and then served in various locations (like the outside dining area if it's a sunny day). This system overall is built to withstand everything that can happen (except for one very important thing). So meteors approaching earth are diverted. Buildings destroyed in natural catastrophes are rebuilt, there is enough data redundancy built in to withstand extreme widespread destruction.

A nanobot agent gets out of control and instead of just keeping everything clean it decides to disassemble humans which causes them to go extinct within minutes. Although the system in place is impeccable nobody designed it with humanity gone in mind. The system bugs out and get's stuck in a 200-year long loop of just replicating everything that it did during that time (every party, event etc.) over and over again.

This keeps up ~1 million years.

All topics that are not >evolution< are taking care of, assume them being handwaved, like how about people being in spaceships not on planet earth? (nanobot malfunctioned everywhere at the same time).

I have chosen such a long timeframe as research has shown that that's the amount of time any serious evolutionary change needs. There are many examples of domestication and selected breeding that have results in a way shorter amount of time but with such a timeframe something has to happen.

No animal besides 'pests' are not directly influenced by the robo-servants.

So wild rats, mice and many different kinds of bugs are physically removed from the venues but any wild stray cat or deer could just waltz up to the dinner table and eat what's there. This is done via image recognition, something newly evolved is not in the system and gets defaulted to the next best thing (and will thusly not be removed).

How would evolution be influenced by this?

or to ask close questions to it:

If something evolves to utilize these systems what kind of being would it be?

TL:DR: Humanity creates 'perfect' robot servant system and then dies out, out of all things most notably food is still served daily in somewhat easily accessible areas, how would evolution be influenced by this?

I'm going to take a shot at this question.

First off, animals will start flocking to these mansions immediately. A large, insulated den with protection from almost anything plus free food. That's any animal's dream! Mere hours after the extinction of humanity you can expect the sad, puppy-eyed dogs and cats to let themselves in the homes of their former masters and gorge down everything they see. The robots simply replace anything they eat, which breaks the delicate cycle of supply and demand that keeps animal populations in line. What ends up happening is a massive explosion in births. Hundreds upon hundreds of feral pets just lazing around the dinnertable, eagerly watching the bots place more food on the table. Within a couple years, the more wild animals will join the party as well. Of course, at some point the houses will become full to capacity, but it still remains a great spot to sleep, eat, drink, do your business, and mate for the next million years.

Onto the actual evolution: all those dogs and cats and whatever else sneaks their way into houses will become fat. Incredibly fat. With no need to chase down prey and all the food they can eat, those animals will soon be reduced to vaguely animal-shaped blobs. They become generalists, being capable of digesting cooked food and dairies more easily. Claws and teeth turn dull, only sharp enough to scare any competitors for food away and no more. Just look at a chicken and wild fowl. All the house-dwelling birds will, similarly, become very overweight and might lose the ability to fly a long distance. Of course, all these fat creatures and little exercise means their lifespans will be decreased; expect a pattern of early births to arise. Any sort of societal structure will likely dissolve- why should the alpha eat first, if there's enough food for everyone to eat? Why should the strongest male lead the herd, if there's no use for strength anymore?

This isolated culture of births and deaths means that the house-dwelling animals might be unable to leave the mansions at all, given how harsh it is outside. Similarly, all the creatures who weren't able to save a spot at the "dinner table" might never have a chance to enter, since the mansions are already crowded to the maximum. Still, many animals will still rely on robots, just in a different way. These so-called "voyagers" will migrate from one event, party, or celebration to the next, eating like kings when they're there but having to resort to contemporary methods of survival during the journeys in between. Assuming that, just like our world, festivals happen on the same day every year, some of the smarter species out there will realize the pattern and capitalize it. Imagine massive mega-herds of animals (sheep and deer are good candidates for this role) storming their way through the abandoned streets in search of festivities. They might strike a symbiotic relationship with birds that can see the events from far away or lead them to surprise parties. Look at the Honeyguide for an example of this in real life. Carnivores might join in on the migrating; however, it's much more likely they'll just play it simple and prey on the vast herds going by. In the end, you have ultra-social herbivores following an annual cycle of migrations, likely with a vague social structure of some kind, a symbiotic bird that leads them to the festivities and feast on the remains, and solitary or small-group predators that stalk the massive herds and pick off the weakest.

Or they might just ignore the mansions entirely and go along with their animal lives. Who knows.

On one hand the question is very opinion based. Everything could happened.

I don't know if you read the news. Monkeys in Thailand are fighting because people (tourists) are not feeding them. That shows that it took few years for monkeys to learn where to find food. Those japanese deers that bow to get food wander further into very empty streets looking for food.
I have no idea how those monkeys who stole drinks on beaches act but they learned very fast where you can find food, how it influence their bodies, that they like it.

The point is - animals didn't evolved to "utilize these systems". They learned how to do that. And they do it. Without remorse. 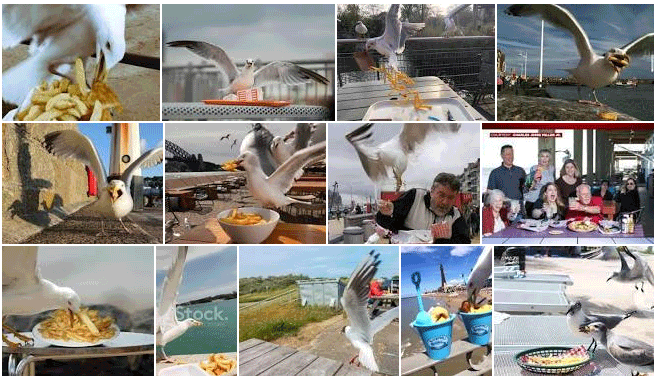 Not the answer you're looking for? Browse other questions tagged technology creature-design evolution far-future .

14
How to fight the orwellian machines?
5
Assuming AGI (Artificial General Intelligence) is possible, how would it be prevented or removed in a future world?
10
What would humans look like if their evolution had been slower?
27
What would be the most extreme form of a surveillance state? And what would living/working in it look like?
4
Building a planet favorable to the evolution of intelligent life
4
How does privacy work if govt can access every camera throughout the city?
6
Robots are superior than humans. Prove importance of emotions to them
1
How would skin tone change with distance to the Sun?
3
Lowest tech level to blow up the solar system
16
How would reincarnation affect the evolution of a species?