Procedurally generating a galaxy's worth of names

I am investigating the practical utility and limitations of a procedural-generation-based naming scheme for stars and other notable or significant interstellar structures (e.g. nebulae, globular clusters) in a Milky Way-like galaxy, for use by an expansive interstellar civilization. Hundreds of billions of names, in other words. More specifically, however, a naming system based on – and communicating – key information about the objects it describes.

25 consonants and 15 vowels. Comparable to English, more or less.

Note: These are phones, not letters.

I am hesitant to put hard limits on how long a name can be before it becomes impractical, particularly when short forms would inevitably be adopted for the most frequently used names.

Taking a cue from the world of taxonomy, the longest taxonomic name appears to be in the realm of 18 syllables (not including "subspecies" or similar designations). The average word in English is just over six letters long, factoring frequency of use, so that's a fair amount of wiggle room.

On first pass it appears to be achievable, with nearly seven and a half trillion unique names from just five syllables:

This would seem to be enough, but I'm not sure it would allow for encoding information without producing ambiguous or duplicate names, or if such encoding would eliminate too many possible combinations. Six or more syllables and multi-word names are, of course, permitted.

As above, ideally such a system will communicate useful information about the body or object, perhaps including but not limited to:

That is orders of magnitude more name space, potentially, though it would require more finessing to ensure pronounceability.

Can this idea be made to work (and if so, how), or are the numbers simply against it?

Break space up into cubes such that no cube contains more than one star. If there are 4 billion stars assume 4 quadrillion cubes. Many are empty.

Consider xyz coordinates such that each cube has an individual xyz. The cube root of 4 quadrillion is 158470. Each coordinate line would run from 1 to 158470. So each cube would have 3 6-digit coordinates. Some of these would be the name of a star.

But we have more digits to use! If the coordinate lines go from 1 to 999999 there would be slightly less than a million trillion cubes. More than enough for a measley 4 billion stars. 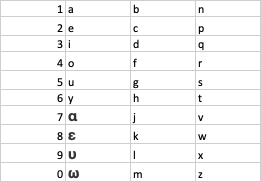 Given that each 6 digit coordinate has 729 possible names there are 729^3 = 387420489 possible different names for the same cube. Then you can choose which names you use according to other properties. For example you could have blue giants have first names with all vowels - so if 916392 916392 916392 were a blue giant its first name would be UayiUe.

You might want to take a look at what3words.com. They built a mechanism to describe any properly aligned three meter square on Earth by a set of three (English or others) words. This further has the property that adjacent squares are not named anything similar. The mapping is fully reversible. (I don't know if the mapping algorithm is published.)

This idea, combined with your phonemes and syllables, could allow for unique naming of everything. This would also let one use only one of the words as a short "convenient" name for a nearby star, though one would need a local star-chart to find it from the short name.

For one dictionary, one probably takes your table of permutations and numbers the entries sequentially. For multiple dictionaries, they would presumably go one to the first, one to the second, etc. Either way, one can translate the number to the word and vice versa algorithmically. (What3Words apparently uses tables, as they want real words.)

One advantage to separate dictionaries for each word: if somebody gets the order wrong, it still decodes properly. (What3Words uses one dictionary, word order matters.)

It is important to note that every step listed is fully reversible. This means given the name, you can get the coordinate.

Not the answer you're looking for? Browse other questions tagged science-based mathematics names terminology or ask your own question.