As mentioned in this discussion: How to keep humans pilots instead of AI in sci-fi future? the ability to handle G forces is a limiting factor on what pilots can do. Some of my solutions to address this will likely be to limit the delta V via various approaches, but I'm also looking into what I can do to make high G forces tolerable for humans.

The problem is that real inertial dampeners are rather high-tech. If you can install some inertia dampening field you have discovered a way to mess with a raw force of nature, and there have to be all kinds of other interesting technology that comes from such a discovery. I want a somewhat near-future work, advanced enough for space travel but not to the level of all tech being applied phlebotinum. Thus I don't want inertial dampeners that are some magic hand-wave field that 'just works'.

What are viable approaches that could be used to help pilots handle high G forces without full scale inertial dampeners? In a somewhat advanced future, but before we reach the point of energy fields and nano-robots what approaches may be viable that aren't, yet, viable for fighter pilots of the present?

I'm most interested in space-fighters, though I don't know if the fact that their in space really effects the issue of G force and inertia.

An unprotected civilian in a sitting position can remain conscious up to 3-5 g's depending upon their fitness level.

Some ideas for increasing this:

Pilots still need to practice the 'g-straining maneuver' that consists of tensing the abdominal muscles in order to tighten blood vessels so as to reduce blood pooling in the lower body. High g is not comfortable, even with a g-suit.

The test below shows that someone survived g-forces up to 45 g's in experiments and 180 g's in crashes but both of these were instantaneous loads. So I'm not sure what the theoretical maximum g-load is. 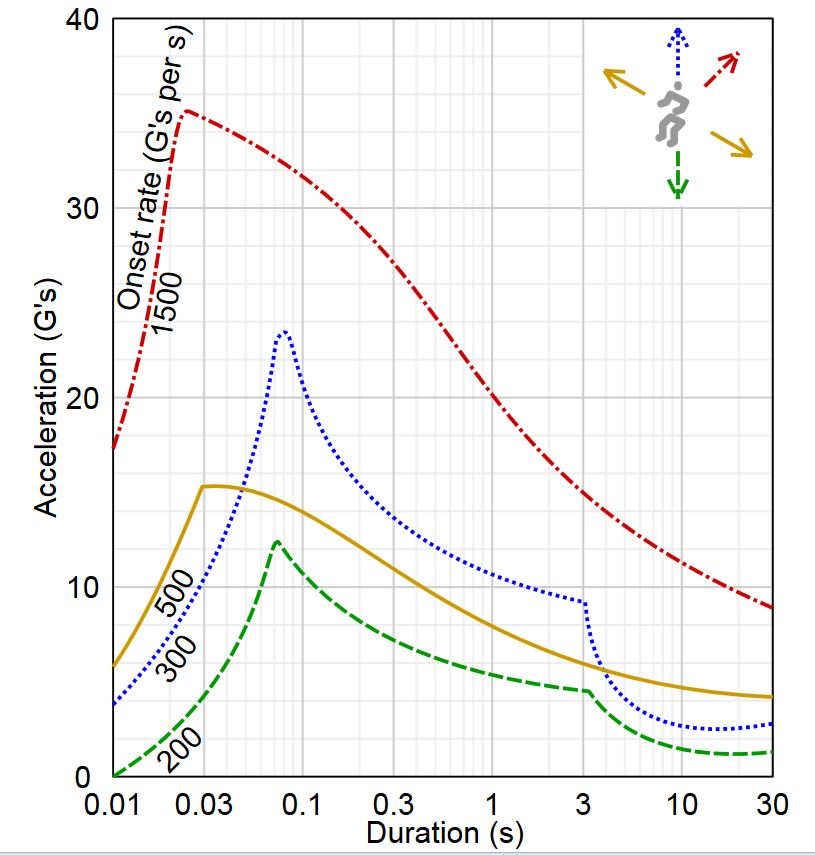 Keep your pilots on the carrier doing their flying via remote control technology. The pilots still need to be in space near the fighters because of the limits to the speed of light. Their virtual cockpit could still be just like the real thing except for blacking out, and getting hurt and killed.

I.e., just the same thing the US is currently doing as it is coming to rely on remote control drones. This is certain to be only a first step toward unmanned fighters, regardless of how much the ex-pilots in the force resist the change. Pilots in vehicles only make it more expensive to operate and much more expensive in terms of replacing lost pilots.

It occurred to me that maybe the remote pilots don't even have to know that they are remote pilots -- perhaps due to built-in VR of their fully enclosed flight suit after all, they don't actually need a transparent face shield. Let's assume that pilots perform better when their life is on the line -- actually a reasonable assumption if it reduces unacceptably risky behaviors that destroy too many unmanned fighters due to lazy piloting. And now the pilots also believe they have inertial dampening fields too. Perhaps this is now a fully legitimate answer.

Recovery from "kills" could be explained as a last resort high tech force field, perhaps a Slaver stasis field. If you need to get rid of pilots ... no problem, the field did not work for them. Or it could also be that dying in the simulator naturally results in death in a certain percentage of cases. You have a reverse Ender's Game setup, one politically dirty, one politically clean. Of course those in charge would know the truth. News organizations could be fed misinformation, etc. so only the insiders would know the deception.

Of course, some might object that remote control is subject to hacking, jamming, and speed of light delays -- all true, but the remote advantages may still be larger overall. Still not real inertial dampening though; of course Barbie says, "Gravitics class is hard."

I should also point out at that having pilots in the carrier is not the same as having them in their fighters thanks to the speed of light. If you assume max acceleration of 100 g and a battle lasting 5 minutes the fighter could reach a distance of 0.147 light seconds from the carrier by accelerating in a straight line. How you can achieve such a high rate and duration of acceleration in a fighter is a very hard problem physics problem itself too. A lot of science fiction relays on hand-wavium, esp. where the hand waving is non-obvious. We all know that 100 g's will kill you and FTL is fanciful or beyond our physics, but most SF consumers are not bothered by a fighter having advanced acceleration and duration characteristics or forgetting about the time lag associated with relatively short distances.

Leave the cockpit not fixed to the space craft, so that it can move relative to it. It could be suspended on "elastic strings" inside a huge cavity inside the vessel or similar. By delaying acceleration, you could have the pilots survive short, strong bursts in the same direction, maybe to conduct an evasive maneuver. However, it would not help you with long sustained acceleration, because at some time the cockpit will hit the rear wall and then won't be able to delay the high g force any longer. You would need to make sure to damp the system as to prevent oscillations.

One possibility is to enhance your humans.

Titanium (or carbon nanotubed?) re-enforced bones to handle the stress. Assisting pumps around the heart and major arteries, along with drugs, to increase blood flow and keep pilots from blacking out. Something similar to power exoskeleton to let them move their head and hands under extreme forces.

I wouldn't want to bet on what the above would do to your body - I'm sure the long-term medical prognosis would be bleak. It would be like profession football players, where the stress and impacts add up and make you old before your time. But if that's what you need to do to compete...

Take, for example, a military helicopter, which needs to be a rock-solid gun platform for snipers at times. No human pilot can possibly correct for wind and other outside influences fast enough that there is no noticeable movement in the helicopter, so they get a computer to do it.

This computer uses sensors such as the already-installed airspeed and altitude sensors (if they're accurate enough) to detect wind force against the aircraft, and up or down movement, to control output into the engines and the rotors to move the helicopter to counter the movement. Essentially:

Hovering → ASG (airspeed gauge) shows forward velocity → is there correlating control input from the pilot? → no - inference: wind on the front of the aircraft → pitch rotor forward to counter.

This sort of processing is incredibly simple for a computer to do, and I can write pseudo-code that describes it in few lines and not much time.

There are some differences in space, namely the lack of air resistance to measure speed by. Instead, your computer needs to know the force that the engines have put out and for how long in what direction. From that it can work out how fast the craft is going now, and apply some force to prevent the acceleration going over a preset maximum.

Cyborgzation, replace the body with artificial parts, brain augmented with microbots that, beyond the more obvious advantages, makes the brain more resilient to g forces. To me, this is probably what is going to happens in the future if we need to deal with such g-force, because it's (seems) easier.

Make their bodies magnetic so they travel fairly together with the ship. By drinking/injecting some iron-like fluid, preferably organic and non-toxic, you could make their cells easier to magnetize. The magnetic field counters partially or fully the force going to one direction, a suit might be a good idea. The problem with this idea is that at a cellular level what is not magnetic could be ripped off the cell.

An alternative would be genetic manipulation, stronger heart and arteries, harder brain and organs, etc. With things like CRISPR today I don't see this alternative that "magical".

Depending on the propulsion method, you may not need to.

A gravametric engine (maybe not as high-tech as it sounds), wouldn't produce any 'felt' G-forces on the pilot, since every atom accelerates equally, there is no strain.

It may be possible at higher tech levels, to do something similar with a non-gravimetric field instead, creating a 'inertial dampener' of sorts. Remember that they don't need to be as effective as the Star Trek ones. If you can make a body magnetic or affected simultaneously by a force, then you can apply that force to counter any acceleration.

Limitations include how quickly they can react to g forces and deal with them, they may react better to more predictable accelerations for example.

Other solutions to your problem however include: 1> Making a sufficiently intelligent computer to compete with an experienced pilot(with computer assist), makes the computer very delicate/large/expensive, giving them another reason not to be used even if they can take the G-forces a human can't. 2> Thrust to weight ratios in space aren't high enough for G-forces to matter given fuel limitations. If you are been totally realistic, then almost all battles will be fought at distances of 0.5-1 light second with large laser cannons, not close quick manoeuvring dog-fights. 3> Remote control? 4> How hard is it to disable a remote computer? Perhaps its too hard to shield them from enemy emp blasts?

Firing mass weapons would also be an issue. The recoil has drawbacks. I have thought of a way to avoid this, I think, by using a centrifuge method to accelerate the mass. Letting it fly at the target does not cause a recoil as such but does impart a twist or spin into the parent craft. Firing a second mass of equal size in the same direction (same target) but spinning in the opposite direction should remove that effect. Downside, I suspect there will be a good deal torque between the two sides of the weapon, shortening its overall life. Won't help a life form much in turns etc. but it should help out with overall fighter performance.

Bruce BBruce B
1
$\endgroup$
1
Add a comment  |
Highly active question. Earn 10 reputation in order to answer this question. The reputation requirement helps protect this question from spam and non-answer activity.

Not the answer you're looking for? Browse other questions tagged technology hard-science near-future or ask your own question.

92
How to keep humans pilots instead of AI in sci-fi future?
14
Orienting a pilot inside a space fighter
9
How long can humans survive in increased gravity?

9
Method to share genetics beyond traditional sexual reproduction
8
How would a population react to an AI made for the purpose of statewide surveillance using current tech?
5
How could earth civilizations send 2000+ humans to Venus in six years?
1
How can black holes be used for daredevil gravity slingshot sport?
8
The Diet of Space Dwellers