How to prevent the creation of the Atomic Bomb?

The invention of the Atomic Bomb changed major conflicts basically turning them into a nuclear arms race. what I want to know is what single change would have prevent the creation of the Atomic Bomb? now such a question is quite vague and would likely get closed, therefore I list a number of disclaimers, in order to make this question fit into the topic of this site.

As stated in other answers stopping the arms race from a technological point of view is hard to impossible. Making scientist and/or the general public unwilling to fund/participate in the development is probably easier. For nuclear power this has precedent in the Chernobyl accident which has had a severe impact on all research into nuclear power that still persist today.

The accidental early detonation of the (would be) first atomic bomb while still at the production facility would cause a major set back in the research since it both destroys evidence of what has gone wrong and kills a lot of the scientist and engineers necessary to build the bomb in the first place. Since it will be hard to find out what has gone wrong it will be hard for the scientist to say if it was a minor problem or a major design flaw. The effect will be that anybody will be very hesitant to continue with the project or try to start a new project.

Anything that suppressed the rise of Nazism in Germany and especially their assumption of government in the 1930s.

A specific event set the USA on the path to building the Bomb. That was the so-called Einstein letter. This was drafted and prepared by Leo Szilard and Eugene Wigner. They persuaded Einstein to sign it. Einstein said later had he known what nuclear weapons and the arms race was like, he wouldn't have signed.

Leo Szilard was inspired in realizing that a chain reaction was possible after reading HG Wells' The World Set Free (1914). This was a novel about a future atomic war in the far future of 1955. Szilard read the book in, about, 1936.

Of course, most of the preliminary work about the feasibility of a nuclear bomb was done in Britain in the early 1940s. Britain and its Allies lacked the industrial capacity to build the bombs and their associated infrastructure. They had a war to fight. The USA did have the necessary industrial capacity. So the British shared their nuclear knowledge and gave the Americans a substantial leg up.

The main impetus of developing nuclear weapons was two-fold. The war with Nazi Germany and the fear that the Germans might build the Bomb first. Remove those dual factors and the atomic bomb won't be developed. The cost commitment of funds and resources is too great for almost any peacetime nation. This would be especially in a world where the Second World War and the concomitant rise of Nazi Germany didn't happen. It's not what happens after the War that's important, it's the War itself. So that's the single event that needs to be removed.

We all know this is an impossible task. Project is too complex and has too many players for it to be derailed by a single actor.

Following from Readin's lead (excellent answer, by the way!), let's look in the other direction. What comes to mind immediately is a scientist or engineer who can somehow grasp how absolutely horrific this weapon will be. This insider will be the one to throw the game.

And lo and behold! Someone actually done it! And rather successfully. There was a short story written in 1958 and reprinted in 1986 in the anthology Hitler Victorious, called Two Dooms by Cyril M. Kornbluth.

The short version: scientist gets the news that a breakthrough has been made -- the Bomb can actually work! Maybe through some prescience or just too much bad cantina food, he withholds the information for the moment from his superiors and goes out into the desert to sort things out, because he knows what such power will be capable of in the wrong hands. To say nothing of the right hands. Basic moral dilemma. He has out there a Native American friend who feeds him some really good mushrooms and he goes on a spirit quest. There, he learns what will happen in some distant future if the bomb is delayed: obviously, a victorious Japan rules the western US and a victorious Germany rules the east. The Japanese are ruthless neofeudalists and the Nazis are wack with pseudoscience. The world is pretty much stuck with 1940s tech and civilisation is on the downward spiral. Eventually, he eats some more mushrooms that he finds in a German facility, wakes up from his spirit journey and armed with this vision of horror, goes back to his life to ensure the Bomb gets made, and the rest is history.

All you have to do is ensure that he never wakes up from his spirit journey!

Depending on how far back you're willing to go, you could simply have the Solar system be older. It could have formed a few billion years later, and then had the rest of history progress as normal. This would add several half-lives and significantly reduce the prevalence of U-235, the "enriched uranium" that they use for making many atomic bombs. This would make a bomb like Little-Boy nearly impossible to produce.

This would not however put a significant dent in supplies of U-238, which is the raw ingredient for making plutonium based weapons, such as Gadget or Fat-Man, and has a significantly longer half-life, but perhaps those kinds of bombs can be disabled for a separate reason.

As many posters have pointed out, the knowledge of nuclear physics was simply too widespread by 1930 to really obscure the idea of a nuclear chain reaction. Atomic energy was so well known that H.G. Wells postulated a form of atomic weapon for his novel "The World Set Free" in 1914, although today we would recognize this as a "salted" or "dirty" bomb.

By the time WWII is actually under way, all the major combatants have some form of nuclear program. Imperial Japan, despite its lack of industrial capacity, actually has two programs, one conducted by the Imperial Army, and a totally separate one by the Imperial Navy.

However, the biggest problem in any nuclear program is actually getting the fissionable material. The Germans seemed intent on using natural Uranium moderated by heavy water (D2O), a process similar to a modern CANDU reactor. From the various books and documents that I have been able to read over the years, it seems fairly clear that few people had any real understanding of the difficulty needed to get fissionable uranium, and fewer still had the resource base to do so.

Only the United States had the resources and ability to do so, and even then, the Manhattan project needed to explore every possible means of enriching Uranium in order to discover which one was most suitable for industrial production of enriched Uranium for reactor fuel and bomb material.

Since none of the other Allied or Axis powers seemed to have the ability to find and scale a method of Uranium enrichment, then having either the United States sit out the War, or enter a year or two later means that only very tiny amounts of enriched Uranium are available for experiments, but never enough for power reactors or bombs. This prevents Uranium "Gun" type bombs like Little Boy, but the understanding of nuclear fission exists, and the production of Plutonium is possible, even with natural Uranium reactors.

This presents a problem, since even with 1940 era technology, the various special timers, switches, detonators and mathematical and machine tools needed to create a functioning "implosion" device exist (and this was demonstrated by "Trinity" and "Fat Man", the first and third nuclear weapons ever detonated).

Here a slight hand wave could exist. If you disallow the precision timers which create the conditions for the symmetrical implosion waves that make plutonium fission bombs possible, then the various powers will try to create Plutonium "Gun" bombs. However, this configuration is impossible, since the Plutonium will start fissioning under the presence of emitted neutrons even as the two pieces are being propelled together, creating a "fizzle" yield rather than a nuclear explosion. 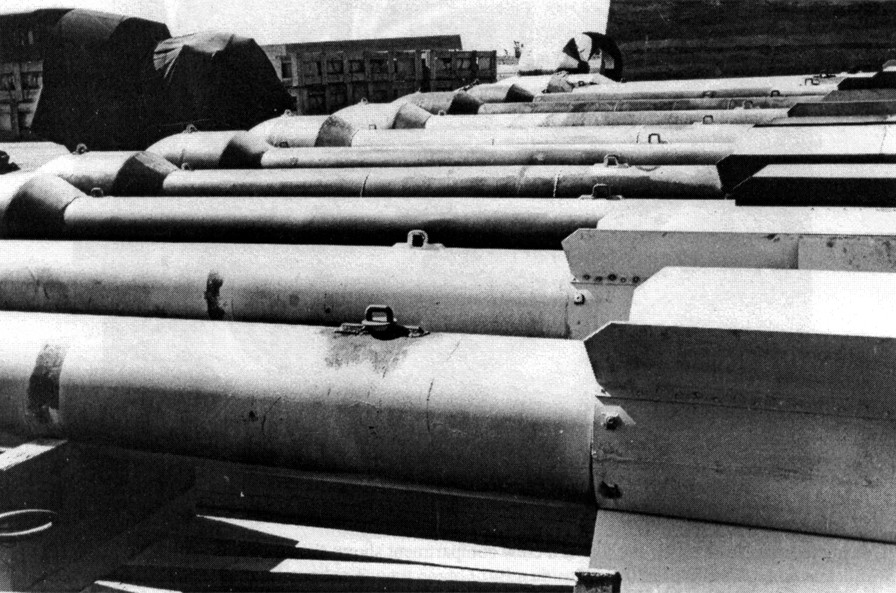 Plutonium "Thin Man" bomb casings. At over 17' long, they were only able to be fitted in specially modified B-29's. Even a 3000' second "shot" speed was too slow to prevent uncontrolled spontanious fission

So essentially, all that can be done by the 1930's is to slow down the ability to create fissionable materials, and to handwave the ability to build the intricate timing and switching devices needed for implosion bombs away.

Replace nukes with something else

Initial nuclear weapons were fairly unimpressive, especially relative to the effort expended to making them. Thus the nuclear arms race can potentially be averted if their space was replaced with some other MAD weapons system. In particular mass use of chemical weapons, or bioweapons.

For example, if the Manhattan project hit hurdles and the war was instead won by Churchill's "Operation Vegetarian" anthrax bombing campaign, the immediate impetus would be for different countries to develop bioweapon arsenals for deterrence, and once the major superpowers have various death strains ready and delivery systems suitable for this, there would be much smaller an impetus to replace the system with nuclear weaponry.

A few years before the war, a well-known and respected scientist comes up with calculations showing that an atomic bomb reaction would not stop and entire world would be consumed. The scientist is well-respected enough that no country embarks on a program to develop an atomic bomb and nuclear energy is considered too dangerous to pursue as well. The calculations are a lie.

You could toss in a conspiracy of top scientists who agree to this deception (i.e. the scientists who read the faulty paper and are smart enough to recognize the errors in the math don't say anything) because they agree that a nuclear bomb is too powerful and don't want any country developing it.