Now octopuses are quite smart already capable of camouflage and puzzle solving. 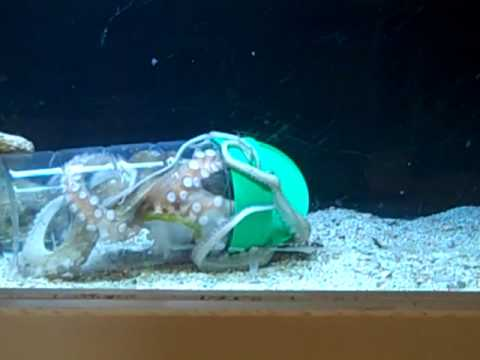 given this I was wondering whether Octopuses could Convergently evolve sapience (human level intelligence) and what evolutionary pressures would lead to them doing so?

Any potential answers to "what makes makes a species evolve sapience" currently suffer under a major limiting factor: we have exactly one (1) example to extrapolate from.

With that caveat, the current rough consensus is that the key factor is strong reliance on tool-use and social cooperation.

Physiologically, humans aren't that impressive. We don't have bone-crushing jaws, sharp claws, tough hide, horns, et cetera. Our evolutionary ancestors made up for that by living and hunting in packs/tribes for strength in numbers, and by using tools to offset their physical disadvantages. All surviving Great Apes species — which includes Homo Sapiens — exhibit this behavior, as do a large number of other species, but we've never discovered any evidence of any other evolutionary genus producing the level of intelligence exhibited by Homo.

The end of the Pliocene Epoch was marked by a series of rapid, drastic climate changes that threw ecosystems across the world into chaos. It appears that the Homo genus developed as it has because it responded to the instability by relying even more on tools and social cooperation, rather than by physiological changes like the other genera. Homo individuals that cooperated better and used tools to greater advantage were more successful at reproduction than their less adept peers, leading through natural selection to brains of ever increasing size and complexity.

Octopuses are of course known to be tool users, but they do not currently (as far as we are aware) rely on tools to the extent that early Homo members did. We also observe them to be solitary, rather than social.

Thus, for a species of octopus to follow the same path towards intelligence that humans did, there would need to be environmental pressure to change those specific behaviors. Something that gives a high reward to individual octopuses who work together and make extensive use of tools to augment their natural abilities.

Once that pressure exists, there are a few additional small but significant changes that need to happen in the octopuses themselves.

This is the most important one. Similar to the human pituitary gland, an octopus's optic glands (one next to each eye) play a significant role in sexual maturation. Unlike the human pituitary gland, an octopus's optic glands also shut down its digestive system upon sexual maturity and octopuses — male and female — starve to death soon after reproducing. However, in "Hormonal Inhibition of Feeding and Death in Octopus: Control by Optic Gland Secretion", published in Science magazine (Vol. 198, Dec. 2, 1977), it is shown that severing the optic glands after a mating event allows octopuses to live two to three times as long post-coitus before succumbing to apparently age-related illnesses. Which leads me directly to...

Currently, the longest-lived (known) octopus species, the Giant Pacific Octopus, only lives about five years. Clearly, this is not conducive to building social long-term structures. But if the digestion-inhibiting effects of the optic glands is suppressed or removed (through natural mutation or artificial meddling) without affecting fertility, octopuses might be able to reproduce more than once, which would start to naturally select for longer healthy lifespans. This naturally helps with mental and social development, and it also allows for...

Currently, octopus infants are all orphans left to survive on their own, which leads to very high child mortality. Longer-lived octopus parents could potentially help raise their offspring, boosting the odds of those offspring surviving to reproduce and pass their homemaker genes along. This can also provide additional evolutionary pressure to live longer.

A potential alternative to letting octopuses survive reproduction is having some octopuses not reproduce. A longer-lived infertile (or merely celibate) octopus could take on the role of caregiver for eggs and infants, which would be an evolutionarily beneficial role as long as some of the infants it raises also become caregivers for the next generation.

They need some kind of complex communication. Before that, they need to start some kind of social life instead of being solitaries.

Absence of an opposable thumb does not seem to prevent them from using tools.

Community behaviour is important to be able to bequeath a culture to next generations.

This is a giant problem for cephalopods as it's more a characteristic of mammals and birds.

It can't conveniently evolve intelligence. It may be able to evolve intelligence out of necessity, but not out of convenience. Evolution isn't 'I'd like to look blue because I think it makes me look better', it's 'Evolve to blue to camouflage yourself or die'. Death is one heck of a motivator. And, as it happens, I think an octopus could evolve sapience based on necessity, assuming the same rules of evolution for humans. Am I nitpicking when I say that an octopus can't conveniently evolve, but could necessarily evolve? A little bit, sure, but I think it's very important to be precise when we discuss scientific terms because if we don't, then that's where miscommunication and confusion starts. Speaking of which, what's sapience anyways? (Well, you've defined it as 'human-level intelligence, so I'm using that.)

The limiting factor here is, of course, the brain. We're not quite sure what exactly it is about the human brain which uniquely makes humans that intelligent. It probably has something to do with the brain mass to body mass ratio. There's also a minimum size requirement. Not to mention that there's a complexity requirement when it comes to the brain's design. Could an octupus ever acquire such a brain? Maybe. There's nothing prohibiting such a structure from naturally evolving in their head if such a structure naturally evolved in a human head.

In order to evolve intelligence, octopi would need two things - they would need to get bigger and need an environment which would reward intelligence. What I have in mind is suppose that humans decide to do something really foolish like melt all the arctic and antarctic ice, which floods the world. This would, in turn, create new and exciting biomes for aquatic creatures, like the new 'sunken city' biome, which would lead to new evolution as creatures that specialized in the sunken city biome came around. One of these might just be a new breed of octopi which grew larger due to new predators and smarter to manipulate the environment.

Not the answer you're looking for? Browse other questions tagged science-based reality-check evolution sapience or ask your own question.

2
How could octopuses evolve a complex society

13
Sapience Pulsar - Could Intelligence Come in Waves?
3
How can we influence our own future world by encouraging evolution of non-human intelligent species?
42
Why did dragons evolve to be smart?
5
If 50 members of a species were given intelligence, how long would it take to evolve?
3
Could a prosimian conveniently evolve sapience?
3
What evolutionary pressures would lead to fairies?
4
Could bipedal humanoids evolve from bears?
5
Anatomically Correct Grootslang
5
Could a tetrapod Pegasus exist?
1
Could my Angels exist?