How to survive a supervolcano eruption in short term and a post-apocalyptic world in long term?

A supervolcano has erupted (with a Volcanic Explosivity Index (VEI) of 8 or higher1) at Yellowstone Park. I am not in the kill zone and not in at least 300 km (~185 miles) radius so I have time to escape. I have survived the initial hazardous downfall of volcanic ash as well. 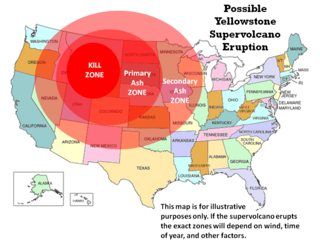 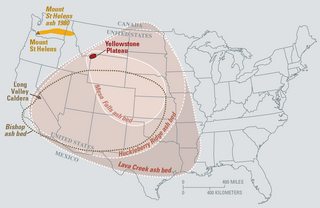 Left image: Possible zone map after the eruption from reddit
Right image: Known ash-fall boundaries for several U.S. eruptions from usgs.gov (but it would be a larger area in our case):

How to survive the supervolcano eruption in short term and the post-apocalyptic world in long term?

Related questions:
- What supplies do I need and can I get in short term?
- What strategy should I follow?
- Where should I go and settle? Should I be always on the move?
- How to find food?

Notes:
- I've tried to make the scenario realistic and detailed but you can let me know if I can update anything or if I can add more bullet points.
- I've searched the site if there is any duplicate question but I couldn't find anything similar or related to supervolcano survival. Although, there are many post-apocalyptic themed questions.

1 A volcanic eruption with a VEI higher than 8 had never happened in the history but there is a potential. In our scenario, the eruption should effect the whole world over the years.

The trick to surviving a sudden collapse of society is to get out of it as quickly as possible and to go somewhere that few others are trying to get to.

In this case, owning a thirty-foot catamaran (equipped with a water still and ample fishing gear) and having the skills to operate it, your character could head out to the open oceans south of the tropics. As long as they stay away from islands and shipping lanes, you should be left relatively alone and safe until society returns.

You face several categories of dangers. The ash is going to be a problem. It will clog this and abrade that and cause difficulty breathing for everything that breathes, organic or machine.

Conditions are getting bad quickly. Infrastructure is collapsing or clogged with refugees. The power grid is not working. Gas station pumps won't be working, though there is likely still gas in the underground tanks. Any obvious source of resources is going to get mobbed and looted quickly. So, grocery stores will get stomped quickly. As will any outlet that has any sort of portable food or water. As will pharmacies and hospital dispensaries. As will clothing and shoe stores, especially "out doors" type stores.

Refugees will be getting more and more desperate for a variety of resources, food, water, shelter, transportation. This will result in, at first, riots, then pitched battles with whatever is available. In the US mid west, that means guns aplenty. Rifles, shotguns, hand guns, maybe some more esoteric and extreme weapons that somebody has in their private stash. Maybe the local police station has some interesting hardware. Maybe even the occasional military weapon, depending how far the local military base is.

You need transportation that will use small quantities of fuel, will be flexible as to surface it travels on, that can go around blockages of various kinds. And that you can improvise some sort of filter over the air intake for the engine. Motorcycle is popping up in my mind. Possibly ATV. It may be better to travel quickly away from the most intense ash fall rather than trying to acquire any resources. Maybe you can siphon fuel from vehicles with compatible fuel, so you want a motorcycle that takes "regular."

You will prefer a bike that is robust and rugged rather than pretty. But you will need to take what you can get. The dealership won't be open. Unless you already have a bike you will probably have to break into someplace that has them. You will want to do that early rather than late, since there will be many people with the same thought.

You will want a few buddies. Alone, you don't have any possibility of guarding your sleep. You will find places where you may need to lift the motorcycle over some small barrier like a wall or a rock fall or some such thing. Other situations call for backup. Four to ten people seems about right.

First priority is fuel for the bikes. Then food and water. And some camping gear of some kind. A water treatment kit would be good. You will want some kind of weapons, though you should not over do that.

Your first priority in a confrontation is avoidance not fighting. If you have a huge pile of guns it will tempt you to fight instead of run, and that is a mistake nearly all of the time. If there's a road block with people on it, you want to go around. Maybe the next road over, maybe through farmer's fields. But you want to avoid confrontation if you can.

If you can repair the easily predictable things that is good. Punctures in the tires. Broken wires or fuel line. If you get a major failure ride double until you can find a replacement rather than spending days trying to fix it. Spare parts are likely to not be available. Another reason you don't want to go alone.

You will need to suspiciously check the terrain ahead. Maybe "back roads" are better in some places as compared to the highway. You want places where there are unlikely to be gangs of people waiting to take your bikes, food, water, guns, etc.

Once you get out of the ash fall area it's a question of living as a refugee for a year or maybe two. Ash will, with rain, work itself into the ground. The ground actually comes back as better farmland in a year or two. So after about that long, everybody is moving back into the ash fall region and resuming their lives.

There will be many dead, and much damage to buildings and infrastructure. This is strongly localized near the center of the event. You basically lose all buildings and bridges and such in what you called the "Kill Zone." Since this area is a less populated area to begin with, the damage is far less than it could be. Outside that, the ash becomes mud on the first rain, and starts to work into the ground.

In 20 years, people will be resettled in the ash zones and moving back into the kill zone. They will reminisce about "The Big One" or "The Day It Happened." And the farm land will be a little greener.

You must always be on the move. There is no way that order would ever recover from such a catastrophe in any amount of time relevant to your survival.

The Volcanic Winter will bring crop failures, and the cities will be guaranteed death traps in a societal collapse purely on how many desperate people would be there. So you must trek through the wilderness seeking food that other humans won’t be immediately accessing and won’t be destroyed by the winter. This food source is wild animals. While ecosystems will be in a state of disruption if not collapse, you have far better chances hunting animals that survived the last ice age (elk, bear, deer) than subsisting on scraps or highly modified organisms that are dependent on a narrow temperature range and human care.

You should seek to move south and towards the coastline, but avoid cities and towns at all costs. Your goal is to move through undeveloped land, as you will encounter less raiders and more wild sources of food. Don’t bet on anywhere actually being a safe haven.

You should be equipped with a rifle, ample ammunition, warm and water resistant clothing, fire starting equipment, knives, hand saw, a pot for water and food, water containers, a purifier, wool socks, first aid kit, more socks and most importantly the skills needed to actually survive in the woods for the rest of your life.

Pack like you’re going on a hunting trip that will never end, because that is your life now.

Not the answer you're looking for? Browse other questions tagged post-apocalypse survival volcanoes .

10
Geopolitical and Economic Implications of a Large Eruption at Yellowstone
4
Californian Yellowstone
1
Benefits to Yellowstone Eruption today?
25
What could cause a post-apocalyptic, rapid desertification of vast areas of the world, similar to the land in Mad Max: Fury Road?
2
Could a supervolcanic eruption in the Phlegraean Fields be triggered by detonating a 1-gigaton nuclear bomb and then fracking the resultant salt dome?