Quick! How far away is that asteroid?

How might an enterprising spacer, mining the rings of Saturn, go about quickly measuring/estimating the velocity of and distance to a nearby moving object (asteroid, habitat, pirate, etc)? Bonus points for measuring acceleration.

The lower tech, the better! The Saturnians would rather a microprocessor not be in the loop at all. They are a tough bunch, and would prefer a more reliable method with less electronics/moving parts, even if it meant lots of training or practice. Human>mechanical>electronic.

Note that this is more for quick maneuvering, rather than plotting trajectories that will be accurate over long distances/times (though if the method works for those, that's great too). Distances are tens of kilometers (maybe 150km at the outside), and the relative velocities are on the order of 100km/hr.

Coincidence Range Finder Since we understood optics and trigonometry, we’ve been able to estimate range to far away objects.

This is a schematic of a range finder that mechanically computes the distance when an object is clearly viewed in the objective lens. The operator adjusts the compensating mechanism to overlay the image from the left and right prism.

This diagram gives a clear functional statement about the operation of these kinds of devices. 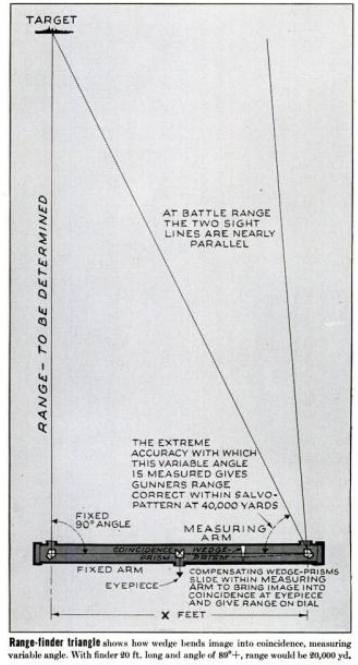 Once you have an estimate of the range, and you know your velocity, you can use Time Motion Analysis (TMA) to quickly derive the asteroid’s velocity (speed and heading). One method that is performed by hand, as a back up and sanity check, by submarines tracking targets, is Ekelund Ranging. I did this during battle station drills using a sharpie, graph paper, and a ruler, and was expected to nearly as fast as the analog computers we used for fire control.

One of the best known Time Motion Analysis techniques is Ekelund ranging. It is a method that is specifically designed for a 2leg-1zig scenario. This method works by first estimating the bearing rates during the first and second leg ($BR_1$ and $BR_2$ respectively)

Secondly, one calculates the speed of advance (SOA) along the line of sight with the target on the first and second leg ($SOA_1$ and $SOA_2$ respectively

The rule then states that the range of the target at the moment of second leg is given by:

Not the answer you're looking for? Browse other questions tagged science-based space navigation or ask your own question.

6
Fake Apocalypse - asteroid
58
How far away would an alien civilization need to be for us to not notice them?
12
Can asteroid fields exist in local systems?
3
How far away would the moon need to be to not be visible anymore?
8
How do I actually mine an asteroid?
1
How would a steam powered machine in one place provide power to towns that are far away?
9
Asteroid thicket dogfight in Saturns rings
14
From how far away can it be deduced that there is sentient life on earth?
10
Proper combat distance scaling for a sci-fi space opera tabletop setting