Though this applies to lizardfolk and most creatures with a snout as well, I'm having trouble giving more facial expressions to dragons. Sure, they can wink, bare their fangs and laugh out loud and that sound is literally roaring laughter. They also have tails and wings, but the face is easier to read for humans and can convey more complex messages without having to say a word.

Plus there's that a bit too toothy smile might end up giving the wrong message and before he knows, the entire city watch has surrounded the dragon.

So, how can I give facial expressions to dragons?

Note: While rumaging through my folders I found this picture: 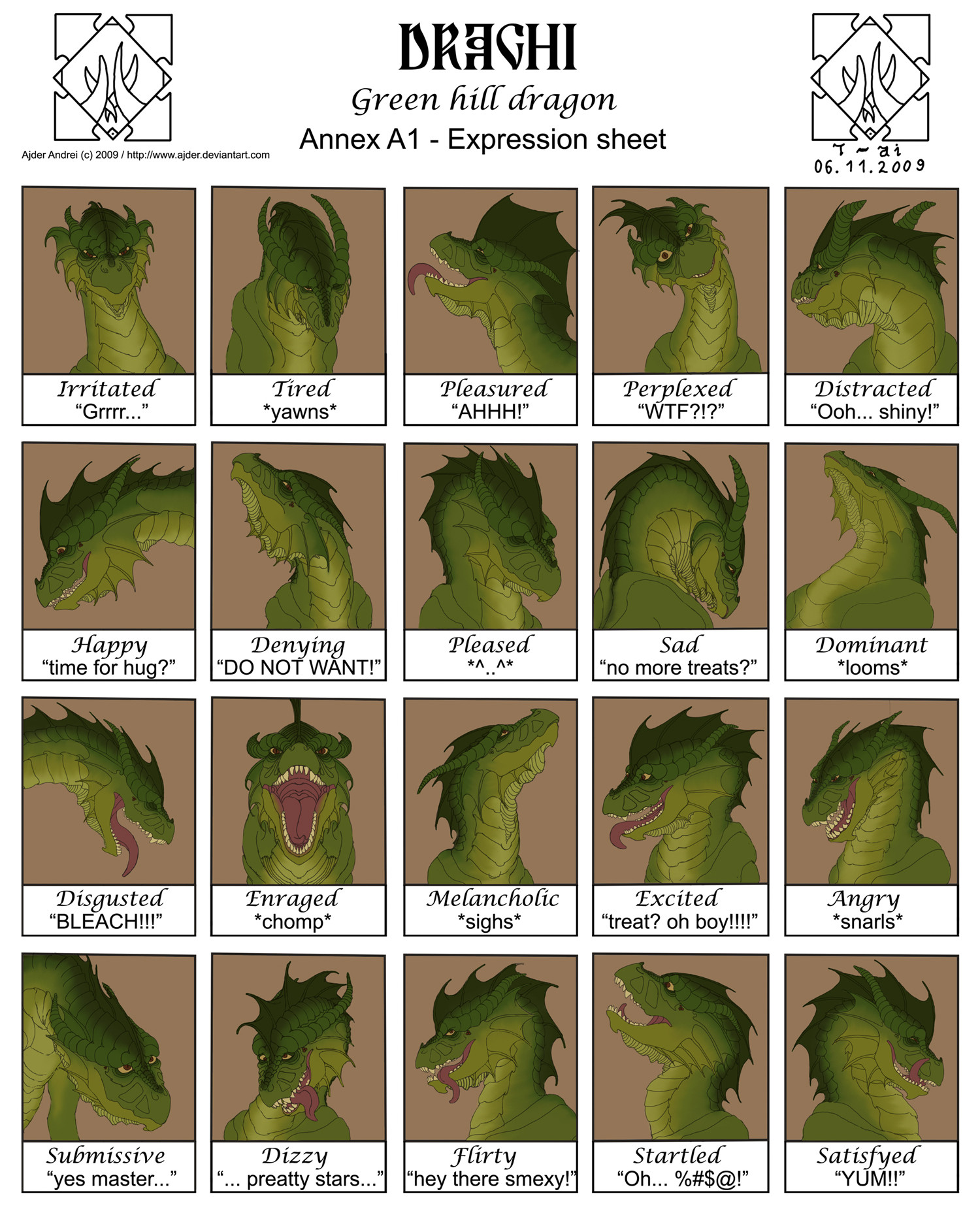 Look at dogs and cats for inspiration. Besides doing things with their tongues (as CaptainSkyfish suggested; good suggestion!), think also about angle of their head. Do they have mobile ears (or ear-like fins)? If so, these will almost certainly be expressive. It's not much of a stretch to give them moderately expressive lip muscles, that will allow them to raise or lower the corners of their mouths (for a smile or frown), raise their lip over a single canine (fang) vs. their whole mouth (a sneer vs. a smile/grin), or make an 'o' at the tip of their snout (surprise). Even whether or not they pull their lips back, which many animals can already do, can be the difference between aggression and happiness.

Realistically, though, you should also be thinking about whole body expressions. A lashing tail can mean anger (cats) or happiness (dogs). A raised tail can mean contentment. A tucked tail can mean fear / submissiveness. An arched back can mean a number of things. A low sternum with raised hindquarters can mean playfulness or... er, 'mature playfulness'. If you look to existing animals for inspiration, you will find there is plenty of room for expressiveness.

p.s. Another question just posted this, which may give you some inspiration.

If you are trying to anthropomorphize them, they could just have more muscles in their face than lizards and have the same expressions as us.

But perhaps more fun is to consider them as the alien beings they are. In which case, a lot of their expressions could be made with the tongue. A quick flick for humor, a curling for distain, a left-right loll for a shrug, hanging out the side of the mouth for boredom or laziness.

Also, their eyes could dilate like humans when they see something they like, and the reverse when they don't like something. If it is more pronounced, it would be easier to notice.

People often describe the face of dragons as a horse-like face or a lizards face. I never understood why as the european dragon mostly has a canine face in shape and jawline. They are scaly dog faces, but dog faces nonetheless.

And just some google searches that show similar faces: https://www.google.com/search?q=european+dragon

Just try to describe the faces of dragons like this: https://www.dailymail.co.uk/sciencetech/article-2294813/amp/Study-reveals-humans-read-dogs-facial-expressions.html

Humans arent 100% capable of recognizing all dog emotions (and many dogbreeds handle emotions slightly differently from other breeds or even depending on the emotions they emulate from their owners), and that could be a nice way to still convey emotion while simultaneously making them still alien enough as mighty dragons.

Not the answer you're looking for? Browse other questions tagged science-based creature-design communication dragons or ask your own question.

2
I want my gryphons and birdfolk to have facial expressions. How?

10
Wingless Dragons?
6
Methane Dragons
9
Why bother programming facial expressions for artificial intelligence if humans are bad at recognising them?
7
The right size for dragons
1
Evolutionary advantage for recurve fang in dragons
2
I want my gryphons and birdfolk to have facial expressions. How?
7
How can I make phonological constraints without strangling myself?
3
Increased flexibility for dragons?