Could I observe the black hole that created my area of space/universe?

My story has some very advanced robots that have spread throughout the galaxy. Their advanced technology has developed to massive radio and optical telescopes to view unexplored areas of space. When I heard about black holes that can reach enormous proportions, I wanted to explore the idea of viewing one before its end and the thought of what its remnants could create, which lead me to this question.

Is there a way that a civilization from a galaxy that was formed from the exploded remnants of an enormous super massive black hole could view that black hole before it exploded?

Could the energy turned to matter with the speed of the explosion and the expansion of space get far away enough to see this happen? Hawking radiation will allow the black hole to evaporate, leading to of energetic bursts of gamma rays, meaning that in its final stages, the black hole be much less massive in its final years.

Is there a possible way for the supermassive black hole to be viewed while it is still enormous, or even at all, without wormholes and faster-than-light travel?

(If my understanding that energy could be turned into matter with the right conditions for this setting is incorrect, the giant black hole can be surrounded by enough dust and gas to fuel the creation of galaxies.)

I am going to look past objections regarding black holes, them blowing up, proton death, the age of the universe. All valid objections; yes yes, all true.

I take from the OP that he wants his people to be able to watch a very large explosion that occurred in their vicinity in the very distant past.

They could use a gravity time mirror.

Using a very powerful telescope, we could look right at the very edge of a black hole where a light path made it 180degrees around the black hole due to the slingshot effect of gravitation. If the black hole were, say, 1000 light years distance from us, we would be looking back at ourselves 2000 years ago, a gravitational mirror to the past. — BruceRH90, Dec 03 2004

To view your ancient explosion, you would need to identify a very massive and very distant object, and you would need very precise telescopes to visualize just the light that had been hairpin bent around this object. If the distance is right you should see the object of interest before it explodes. Keep watching.

The problem with enormous black holes is that by the time one is even halfway evaporated, all the stars in the universe have burned out, all gas has formed planets, stars and Galaxies and burned out. Everything will be cold, dark and nothing more than an ever expanding cloud. We are talking trillions upon trillions of years.

And in that dark universe, only the black holes would still emit energy. So by the time those black holes have evaporated with a relatively tiny explosion of "just" a nuclear bombs worth of energy (conpared to the sun barely anything) there will be nothing left for your civilization to live in or on.

But this is your universe. You could say that the universe starts shrinking at some point (it's expansion has accelerated unexpectedly so it could shrink unexpectedly as well) and/or that a new big-bang type event has re-seeded the universe with energy.

While the energy of the black hole might travel at the speed of light, it could still leave an inprint on the universe your species could detect. After all we do the same for the Big Bang to see hot and cold spots and get an idea of what it looked like: https://images.app.goo.gl/6UN2MVUxxPxnZhSc9

Is there a way that a civilization from a galaxy that was formed from the exploded remnants of an enormous super massive black hole, could view that black hole before it exploded?

The last red dwarf (the longest living kind of stellar body we're aware of) is expected to die around ~100 trillion (1 x 1014) years from now.

Black holes will only start to evaporate when the input from the cosmic microwave background radiation starts to lose to Hawking radiation - around a novemdecillion (1 x 1060) years from now, give or take a few trillion trillion trillion years.

With that said - maybe an Einstein–Rosen bridge may help with your concept? The theoretical definition of wormholes allow not only for connecting points in space, but also in time.

No, because only electrons, neutrinos and photons will be around

Black holes don't explode; rather, they slowly evaporate - although in the final fractions of a second, they do release substantial amounts of energy. But let's ignore that, and first figure out what the universe will be like by the time this black hole evaporates. A black hole's evaporation timescale is proportional to its mass cubed, $\tau\propto M^3$. For example, a black hole with the mass of our Sun will evaporate in $\sim10^{67}$ years. A supermassive black hole like yours might be like Sagittarius A*, weighing in at about four million solar masses and therefore having an evaporation timescale of $\tau\sim10^{87}$ years.

This, then, is our setting. At this point, we are well into the black hole era of the universe. If protons decay, then by this now all protons and neutrons will be gone; the universe is instead a sea of electrons, neutrinos, their corresponding antiparticles, and photons - and that's it! By the time the black hole evaporates, the universe will be nothing like we know it. There won't even be atoms, let alone galaxies. And those clouds of gas and dust you mentioned? They'll long since have decayed into the same particles. The outside universe will be incapable of forming scientists to observe anything.

The black hole itself won't add much to the universe in the way of matter. The characteristic thermal energy of the black hole, $E_T=k_BT$ (where $T$ is temperature), limits the mass of the particles the black hole can create. For a particle of mass $m$, we would need $E=k_BT\gg mc^2$ to produce such a particle. Even for electrons, this requires rather high temperatures ($>10^9\text{ K}$), which is hotter than most black holes get until the very end of their lives. The black hole will only reach this temperature when it reaches $10^{-17}M_{\odot}$, or about $2\times10^{13}\text{ kg}$; it will evaporate $\sim10^{16}$ years later - a long time on human scales, but only an instance on our timescales. Only in the last 100 million years will it be hot enough to create protons. The vast, vast, vast majority of the particles evaporating black holes produce for most of their lives will be photons and neutrinos.

As a visual aid, here's a plot of $k_BT$ as a function of time until the black hole's evaporation, with lines showing at which points certain particles can first be produced. The neutrino mass is an upper limit, taken from Aker et al. 2019. Keep in mind that this plot is logarithmic! On a linear plot, the three vertical lines would be indistinguishable, smushed together at the extreme far right. 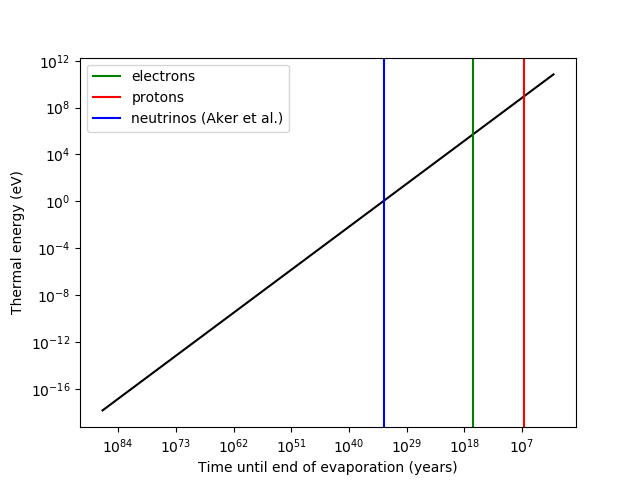 The point is, you can't make much out of an evaporating black hole - let alone astronomers to observe it!

I think you may have in mind an active galactic nucleus, where a black hole is absorbing matter that spins around it in a disk, heating up through friction to immense temperatures. This can produce jets perpendicular to the disk, extending way past the galaxy.

These don't create galaxies, and in fact they may slow down star formation by clearing out all the gas by all the X-rays they emit.

As others have pointed out, over hugely long time scales, black holes evaporate away through Hawking radiation. This speeds up as they get smaller, so at the end it's kind of sharp blast of radiation. But this wouldn't be significant on a galactic scale, and it wouldn't happen (as others have said) until all the galaxies are long gone anyway.

But perhaps you could imagine some cataclysm involving a supermassive black hole that led to the creation of a solar system. Perhaps a clump of gas could fall in, generating a burst of X-rays that compressed a dust cloud, starting a solar system formation. The residents would be able to see that black hole because it would still be around billions of years after that incident. But they could never look back and see the incident, because nothing is faster than light. However the black hole caused the creation of your world, the light from that incident was either part of the radiation that drove the creation, or it arrived ahead of the gases that (maybe) came from the jets. Either way, it's long gone by now.

You cannot see an actual black hole if it's on it's own. But you can see it if it's feeding. The friction of for example a cloud of gas being consumed is very bright. We're watching this happen in the middle of our galaxy the Milky Way right now.

12
How far could life develop inside a black hole before it explodes?
11
A supermassive black hole is coming our way. When's the latest that we would notice?
4
Is a particle beam the best method to fire a black hole at a target?
3
By what methods could the most energy and matter be collected from a supermassive black holes quasar jets?
2
How many Ultra massive black holes should be added to a map of known black holes?
6
How would a K3 civilization collect the majority of the universes available mass in the form of Intracluster gas?
6
How long could a planet or moon survive if it had an Earth mass black hole within it?
8
Preventing black hole formation in a water-filled universe