How much blood does a vampire need?

Assuming that a vampire expends as much energy as a human of similar size how much blood would they need to consume a day?

My naive estimate is 2500 calories a day, there are (apparently) about 9 calories per ounce of blood, thus they need about 7 litres a day, but I don't know enough about biology and nutrition to know if there are other issues at play (like vampires needing more or less energy then humans?, is it easier to digest blood? etc).

The operational definition of vampire for this question is a creature that used to be a human, but subsists entirely on blood. As such the internal structure is more or less similar to humans but it can be assumed that whatever changed them into a vampire optimized the digestive system for blood consumption (and muscles for strength and speed in case that's relevant).

So in general what I'm curious about is: 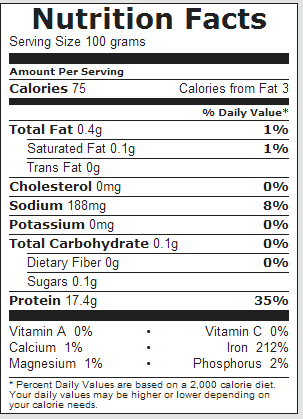 This the nutritional information of lamb's blood. I will use it as an approximation for real blood. They would lack vitamin A (bad sight... live in the dark... that makes sense), potassium, and they would often develop scurvy due to vitamin C deficiency unless they could find other ways of supplementing these nutrients. The serving size of one human would be 9525 grams of blood (unless they go after children...). They would have a lot of fat, a lot of sodium, and a lot of protein (this might be where vampire super strength comes from). The average human would get extremely fat. Perhaps vampires don't die due to a fast metabolism and a very active lifestyle. The high iron count supports this idea. The average human would die by drinking a serving size of blood due to iron overload. Vampires however, might survive by producing many red blood cells, using the iron inefficiently so that the vampire doesn't die of iron overload (this increased red blood cell count might be where vampire stamina comes from). Vampires would need to drink water.

Depends what you think a vampire is. If its a dead body walking around by "magic", then the energy requirements are solely that needed to keep the magic working (whatever that might be). If vampires are supernatural entities (that don't really exist, hence you cannot see them in mirrors etc) then the blood might not even be required for energy expenditure but to give them some "magical" link to the physical world we live in.

Some vampire traditions require human blood - cow's blood doesn't work (or they could just live without the conflict we expect from vampires). That suggests its something special from the blood that is more supernatural in itself (ie human blood contains some magical energy that makes us sentient or 'alive', and the vampire needs this to exist rather than the physical material that makes the blood cells)

I think from all mythological concepts of traditional vampires, they do not need to feed on blood like we need calorific energy from food. So the answer is all down to what kind of mechanism it is that allows a vampire to exist.

Apparently a vampire bat needs to drink half its weight in blood every two nights at least. The average 80kg adult has about 5L of blood. Blood weighs about 525g to 500mL apparently so basically 1:1 let's just round it. So an average 80kg vampire, assuming they are exactly the same as the vampire bat would need to drink 20L of blood every day. A person will die if they lose 40% or more of the blood they have and severe symptoms occur around 20% + I think, so if the vampire wanted to never kill they would have to drink 1L from 20 people for every 24hrs. That's a damn freaking lot. It's only 4-5 average adults though if the vamp sucked them dry, but they'd have a very hard time getting that consistently. I'm not sure if vampire bats also consume certain fruits to acquire additional nutrients, who knows. I'm also assuming that the vampire is restricted to human blood, I know nothing about other animal blood however vampire bats seem to live quite comfortably on cattle blood and other large mammal's blood. The transformation of the digestive system would be rather extensive though I think so perhaps this isn't what you're looking for. More likely would be the need for a magical lifeforce or perhaps they don't need nutrition but are incapable of replenishing blood supplies. If this is the case then they would only need to feed a few times a year assuming their blood cells die at the same rate as human blood cells. I hope I helped ^^.

It depends on other things, like metabolism and digestion.
If you convert the blood into proteins and sugars like we do, then it isn't very efficient, however you could use blood from other sources like cattle.
But classic vampires don't feed off anything but humans.

So maybe it's not just the blood.
Sympathetic magic has always been a big thing; get a couple hairs, a toenail, some blood... If you get into that kind of power then you could be getting life/energy from the victim through the sympathetic link, instead of just digesting the blood. Otherwise there are a lot of other fluids that would be more energy dense than blood.

Or, just to place as an alternative, we can limit the amount of blood the vampire drinks by simply using blood as an addiction or habit rather than a form of primary nourishment, like what heroin is to an addict. Our vampire must drink blood because without it, he or she will suffer severe and potentially lethal withdrawal effects, and he or she gets a high when drinking blood.

In this way, we can have relatively plausible vampires that can live without drinking liters of blood. You will need to excrete that much liquid intake, and urinating all over the streets would not be a good method of staying undercover as a vampire.

First off, I want to say, I think it's cool to consider this scientifically. If a vampire is driven by hunger for human blood, it makes sense to ask the question, "how much is enough."

Using a vampire bat as a guide isn't good I don't think because due to the volume of the bat relative to the skin's surface area, the bat loses a lot of energy and therefore must eat more relative to its body weight than other creatures. The shrew for instance is so small, it loses so much energy it eats almost constantly. Vampires are much bigger and being dead, don't lose energy at all when still.

I think you can justify any amount you chose, but if I were to approach this scientifically, I think I would vary the amount used. The cool thing is, when at rest, no energy used. Humans use, I think, about 400 calories while they sleep just to stay alive. Vampires on the other hand classically have the ability to climb walls, change form, move with ethereal quickness and charm people.

I haven't done the calculation, but since it's imaginary (except my next door neighbor) you could just do a quick and dirty calorie calculation for everything the vampire does assigning them values and then use the values given from these answers about calories in blood and reconcile the two. Example: the CDC says a 150 pound person uses 110 calories to do moderate exercise and twice that do vigorous exercise. So our vampire sits in a chair monologuing to his would-be hunter: 0 calories burned.

Hunter makes a move toward his knife. Vampire moves at lightning speed to come up behind the hunter to prove his superiority. That's superhuman speed. I'm thinking 1000 calories, right there. Then the hunter plasters a cross on his forehead, burning him, weakening him. Maybe he has to make that up in blood. That cost him a couple hundred calories worth of energy. Now he has to fight. If he fought like a human, 220 calories for 30 minutes. If he uses superhuman strength, 900 calories. After he dispatches the human, he sucks down 5 liters of blood for 1785 calories. Sounds like he's still hungry and might want to go trolling for more victims.

But on a light night, he might just stroll down the dark streets at pedestrian speeds using very little energy and snack on a hooker for a nice positive energy total. Also, maybe vampires can go for a little while at a deficit, like humans can. I'd say in a normal night for a vampire he'd need to drain about 1 human. If he's been battling a group of five vampire hunters, depending on the ferocity of the battle, I'd say maybe 1 human for every 5 minutes of melee. On a light night, maybe he would just down a pint or two from someone he has chained in the dungeon. No need to kill him, just keep him weak, which incidentally is exactly what Dracula did. He didn't kill them all.

Ok I may be totally off mark here, but one concept to blood is that it helps the muscles right? in terms of biology, our muscles is filled with water and blood to help them expand and contract. Being that they are dead, their body is more than likely not creating new blood cells. So as they use their super human strength (also due to the fact they would lack the ability to feel cramps from having dead nerves) and high endurance due to their bodies being "dead", they need to feast on blood to replace the dead and old blood that has been used up.

Since Vampires are typically believed to be human, it would be natural that they feed off of a human to regenerate/replace blood as it would directly match their body needs. Other animals may closely match humans, but it still isn't human blood filled with nutrients that the human body uses.

They know when they need to feast again because typically it is before this feasting that vampires feel their weakest. Referring back to my first paragraph about how the blood helps the muscles, this can be related to the weakness since blood needs to help the body move. This triggers the "urge" to feed and once they feel their body is replenished again they stop.

This is a really simplistic idea and probably lacks the scientific exact volume you may be looking for, but logically it makes sense as a plausible start and stop reasoning to me anyways.

Not the answer you're looking for? Browse other questions tagged reality-check biology vampires blood or ask your own question.

91
Why would vampires be incapable of entering a non-vampire human’s house uninvited?
43
Could a humanesque creature derive all its nutrients from drinking blood?
7
Evolution of Vampire Zombie
4
Human Blood as tradable nutrition in post-apocalyptic setting?
5
Would different types of blood (AB-, O+…) have different nutrients for vampires?

11
Big Green Men… from Earth
30
How to help give vampires a more positive reputation?
7
How much blood and/or platelets can a human give to their vampire overlord each day and still be healthy?
18
How would vampires avoid contracting diseases?
22
Where could a vampire get blood without harming people?
6
How Can Vampires Obtain Donors?
18
How can a 15-year-old vampire get human blood?