Could a tetrapod Pegasus exist?

Pegasuses in most works of media are often depicted as hexapods with four legs and two wings: 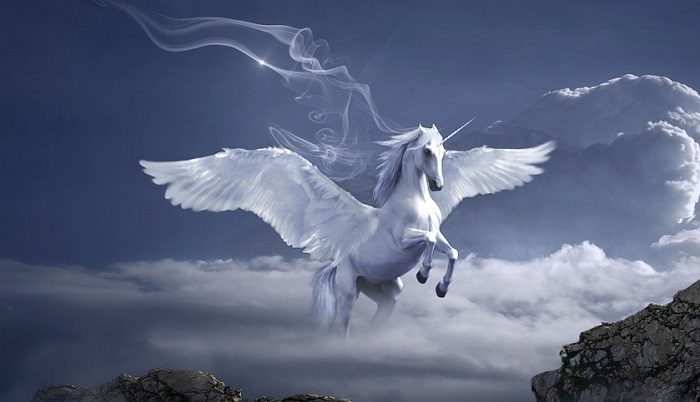 The only problem is (from what I understand) no vertebrates on earth are hexapods, so I've decided to take a sort of wyvern approach and make them tetrapods! Now some characteristics of these "Pegasuses" include:

Given these characteristics, what species could they have evolved from, and what evolutionary pressures would lead to them?

what species could they have evolved from, and what evolutionary pressures would lead to them?

No species that currently exists. The necessary combinations of features just don't exist in any animal; you'd have to go back to the Permian period to get something that could branch off into a whole different biological class, in between mammals and birds.

If you are willing to relax the "birdlike wings" requirement, however, I could see it evolving from some kind of large prehistoric bat. Say, bats subject to Island gigantism. As they get larger, and in the absence of a lot of predators, the need for flight would reduce, and the may develop a body plan similar to a pterosaur, using the wings to walk and prop up the torso, so they can occupy the browsing niche of a giraffe, but with ridiculously long front limbs rather than long necks. Becoming larger and shifting towards a browsing diet would then lead to developing a more bovine or equine face and tooth set.

Now, have a land-bridge open up or something that introduces these quadrupedal mega-bats, who presumably can still fly but usually don't bother, to a bunch of new predators from whom they need to be able to escape. There are many ways to deal with that, and I expect you'd see a bunch of related species around to give clues to this origin for your wyvern-pegasus, but one option would be to just get faster--shrink down a bit, and lengthen the hind legs, so they can gallop more efficiently, because even if you can fly, running away from a predator is cheaper when you are that big. Which is why, e.g., ostriches and rheas go in for the running thing. Again, once you start going down this path, expect a split--some groups might get small enough that just using their now-elongated back legs to jump into the air and fly away is in fact the ideal option for escaping predators on the ground, but bigger ones may discover the benefits of bipedal running, using their wings for balance and steering.

Somewhere along the way, these mega-bats may have developed hoofs on their hind feet, just like actual giraffes and deer and goats and cows and so forth. Most likely, you're going to get a cleft hoof, as horses are the only creature on earth that has developed a single-toe hoof, and that seems unlikely to repeat. However, even if they somehow avoided converging on the large-mammalian-herbivore solution of a evolving a hoof prior to this point, getting good at running fast is likely to result in evolving a single large central toe at this point (which you can also see on ostriches, so that bit is not limited to quadrupedal runners), at which point a cleft hoof might turn into an effective monohoof with an extra small toe, or you just finally evolve a hoof at this point.

That gets you an animal that is normally quadrupedal (because it does not have birdlike wings, and can in fact support itself on its palms) and grazes on grass, shrubs, and low tree branches, but which lifts its wings to become bipedal when it needs to run at high speed, and as a last resort can, with good running start, lift off into proper flight--but not if it's carrying anything (or anyone). Perhaps they even regularly fly to cover long distances efficiently, through soaring--e.g., for seasonal migration.

Meanwhile, it would have close cousins that are smaller and completely incapable of being ridden, but which regularly fly, and other cousins which have stuck with the giraffe niche, stayed large, and adapted to the presence of predators by getting tough and nasty rather than learning to run more efficiently.

That takes care of having fur, being slightly smaller than a horse (but considerably lighter, of course), being quadrupeds, being herbivores, and being capable of flight as long as they aren't being ridden (because they are right at the upper end of the weight range where they can still fly at all). Being monogamous is kind of "whatever"--there's no reason they shouldn't be.

Having very downy fur and having a precise torso and head shape between a Przewalski's and an Icelandic horse can easily be explained by someone domesticating them and deciding that those are aesthetic features they like and want to breed for.

Being mostly solitary is a little trickier. Large grazing animals tend to come in herds, after all... unless they are male. So if you're OK with half of them being solitary, that's easy--just like rhinos or elephants, males get kicked out of the herd when they approach maturity, and live mostly solitary lives until it is time to court a mate. Paired with the monogamy feature, you could have isolated males seeking out small herds of females (consisting of just a mother, father, and children, rather than huge multigenerational herds) in order to try to impress one and draw her off to found a new family/herd (which is what keep herds monogenerational and small).

I see some aerodynamic issues. Only having wings in front means the center of lift will be very far forward, probably ahead of the center of mass. This is not aerodynamically stable. To see why, imagine throwing a badminton birdie backwards.

This can be remedied by adding a lifting surface somewhere behind the center of mass; maybe the tail is flat and wide like a wing?

well first they need to have a place and reason to fly. the flying squirrel evolved in the forest where it has the general ability to hop from tree to tree. horses in the plains don't really have access to that, so i'd say that first it would have to be more reasonable for a horse to be in a forest like a deer, than the fields.

another thing is that horses already have a way to escape things. they run. they are literally specifically built and specifically evolved to run fast, and hard. and also horses can't climb trees so the forest solution wouldn't work anyway. so instead maybe they would live in a place with a lot of cracks? over time they evolve to jump further and better and higher. and one of the ways could be to have a lighter body and possibly skin flaps like the flying squirrel? it would be a stretch and be really heavy, and it would be more viable to just get better legs but we can handwave that away.

the last problem is that the horse developed singular fingers. i mean technically it's a bunch of fingers combined, and the hoof is essentially a really thick, really tough, really hard, toe nail.

maybe it doesn't have to evolve from a horse? you could legitimately just have giant bugs, and call them "pegasus's" with writer's freedom and all. but bugs have 6 limbs AND wings. but maybe one bug decided that instead of using their back to make wings, they should use their legs to make wings! so over time a giant bugs middle legs evolved to be bigger and higher up to be able to jump quickly to high places, or to jump out of the way, in a forest. and over time this middle leg got to about where a pegasus's wings are. the leg thickened, and started being good to use for gliding and catching things. then the leg just started flattening out between the knee and feet over generations, and nowadays this massive nearly horse sized bug that could be normal in your world, has 4 bug legs that are thick, and can be used to crawl around really quickly, and 2 wings that are at first like the other legs, and then at the knee to the feet of the bug legs are massive folds like wings. then all a human has to do is sit on top of one, and hold onto the bug's wing arms like use them to control the bug's direction.

at least that's how i would do it i guess. who knows, maybe cool giant fucking bugs are normal in your world.

1
Could Neopteran wings be supported by a flexible ribcage?